It’s a long one – so grab a cup of tea and settle in for a good story.

A Journey to Rugby League’s Jewel in the Crown

I am making the 1000 km journey from Cairns to Bamaga to assist in the running of the NPA grand final.

The landscape changes numerous times throughout the journey, highlighted by hours upon hours of corrugated dirt road. I am not the most experienced 4x4 driver, so it quite daunting to think that this is the main highway.

After eight hours of driving, I camp overnight in Coen, in a campsite near the river. The next day, I complete the journey to a rugby league heartland.

I arrive to cross the Jardine ferry … and I, along with the 4x4 brigade doing this rite of passage to the top of Australia, line up to get the vehicle to cross the 50m of river that will take me on the final 65km to Bamaga.

I arrive in Bamaga and get a campsite at Seisia right next to the beach.

The Northern Peninsula Area is made up of five communities with a total population of about 2000 made up of Seisia, New Mapoon, Bamaga, Umagico and Injinoo, some of Aboriginal and some of Torres Strait Islander origin.

It has a rich cultural history that I have only scratched the surface of learning. I’m here and eager for some rugby league action. I call Marsat Newman, who is the president of the league and the most experienced referee. He runs the competition and referees both games each Friday night in the four team competition.

Marsat has arranged a meeting for the two coaches before the big game. He reminds them of the Code of Conduct and their roles and responsibilities.

I arrive at the match at 6pm for the game between the Injinoo Crocs (green and yellow) and the Alau Eagles of Umagico (maroon and gold).

There is a massive crowd that is split between the two teams. There is no alcohol sold at the ground and each club has their own food and drink for sale. Chicken stir fry, fish and rice are on the menu.

The ground announcer is begging the children to get off the field so the game can commence.

The game kicks off and the atmosphere makes the hair stand on the back of my neck. The noise is deafening. It is like a coliseum.

I am monitoring the interchanges. I have the best seat in the house. Standing between the benches of the two side I can feel the emotion.

This is not just a game of footy to them. The game ebbs and flow with the lead changing several times. I am told that Injinoo are very experienced and Alau have a younger more inexperienced side. It doesn’t show at this stage.

The game is highlighted by the forwards battling for territory in the middle, and then is contrasted by the slick backline manoeuvres of both sides.

Midway through the second half the game changes. The score is 22-20 to Injinoo and the crowd has suddenly gone quiet.

For 18 mins it is a battle of attrition. Marsat, the referee, has done a great job as the game is highlighted by clean rucks and a good 10m.

With five minutes to go, the crowd ups the ante. Injinoo score a late try and their supporters and players erupt. There are hugs and tears, smiles and players slumped on the ground after the fulltime siren. Daniel Mairu (Alau Eagles) is consoled by an opposing Injinoo Crocs player after the game.

Daniel Mairu, the halfback from the Eagles is draped in a flag of his team and tears are streaming down his cheeks. He did everything thing he could for his community and they come up short. He is devastated.

Robin Pablo, the lock forward from Injinoo gets an award for Best Forward, he was simply outstanding to watch, a workmanlike performance in a physically challenging game.

In the morning I have organised with Marsat to catch his dinghy over to Thursday Island as he also referees in the Zenedth Kes Rugby League, a five-team competition based on Thursday Island.

It is one-hour boat ride from the jetty at Seisia past some islands in the Torres Strait, through to Thursday Island. Terry Abednego, a health worker runs the competition there with a small committee.

I arrive at the ground. It is a semi-final between the Mulga Tigers from Badu Island, and the TI based Roosters.

They are playing for a place in the grand final against Suburbs. The game is refereed by four local referees, the three Mosby brothers and Marsat.

It is such a different game than the NPA grand final. Forwards and heavy collisions dominate.

Rushing defences and one on one battles dictate the outcome. Rooster veteran Steve Singleton, an old school crafty halfback, comes off the bench and nearly changes the result of the match.

A brilliant pass from Singleton and a scintillating try by the young Roosters fullback blessed with speed puts the Roosters in front with a couple of minutes to go.

It is 20-15 after Mulga kicked an earlier field goal. After a clever passage of play the Mulga side score out wide to make the score 20-19.

The final sirens sounds in the background as Badu halfback Rocky lines up an attempt from 10m in from touch that will win or lose the match. He has hit the ball well all day and I have a feeling he will kick it.

The No.7 sends the QRL match ball sailing through the uprights. The comeback is complete. The Roosters are shattered and Tigers elated.

Marsat heads straight for the jetty after the match to dinghy it back to his home. It is nearly dark and the sea is rough. I am clinging on as the dinghy rises and falls over the large swell. My eyes are sprayed by saltwater and stinging.

Marsat said this is mild however takes the safer journey home closer to the islands. I am relieved to see the lights of the jetty of Seisia and this football journey is still not over.

I make it back to Cairns after the gruelling thousand kilometres back home. During the week, I hear two of the referees will be unavailable for the grand final on Thursday Island. I accept the invitation to referee the match and am honoured. I am also nervous as I know how much this match means to Badu Island.

This time I catch the plane from Cairns to Horn Island. A short bus ride then a ferry gets me to Thursday Island. I hop off the ferry and am excited by what I see.

A cavalcade of dinghies are parked at the jetty belonging to the Mulga Tigers players and supporters.

Cars with Tigers flags (orange and black) and Suburbs (green and yellow) are cruising the main streets of Thursday Island, the administrative hub of the Torres Strait.

I go to the bustling main street to get some coffee and soak up the atmosphere. The street is packed with families and supporters in town for the game. I arrive at the ground with reggae music blaring from the PA system at the ground. I feel privileged to be here. Sean Durant (second from left) was one of two referees for the grand final. Special mention to referees Theo Mosby, Laurie Mosby, Danny Mosby, Marsat Newman and George Nona who volunteered to officiate games throughout the season.

I am refereeing the game with three local referees. We go into the referee room and touch judge George says an inspirational prayer before we run out.

The breeze from the saltwater next to the ground drifts across the oval. I inhale deeply focussing on the game. The supporters of both teams form a tunnel for the teams to run out. There are balloons and streamers. The mood is euphoric.

The game is a blur. Helter skelter rugby league from the opening whistle. Like the week before is as a flurry of hard hits, offloads, support play, missed opportunities. The players tread a fine line with their physical style of play.

At halftime I feel myself losing my voice. It is hard to hear on the ground due to the noise of the crowd and I feel I am screaming instructions. With the game at the business end it is still anyone’s game.

No 8 from Mulga is not the fittest but his straight running and quick play the ball is causing trouble for Suburbs. Ishmael the hooker from Suburbs is doing his best to create opportunities and explore any weakness in the defence. Suburbs finally have some success and get within two points.

The game ends in a whirlwind of classic hits, dropped balls, half break and screams of ‘oohs and ahs’ from the crowd. Mulga win the match 22-20. 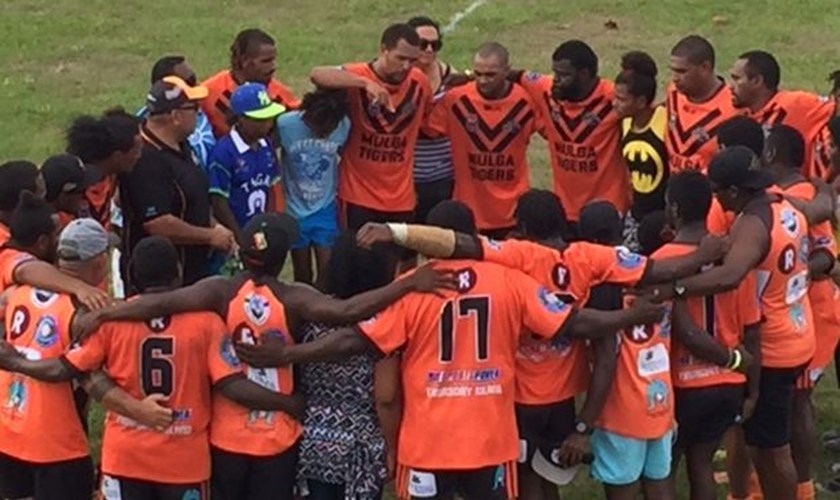 Remus Phineasa addresses his team in the huddle

Mulga five-eighth Remus Phineasa is the Man of the Match. In his speech, he talks about doing it for the kids of Badu and that rugby league is not just a game to them.

I am physically and emotionally exhausted. All the players and crowd are embracing in the middle of the ground.  The two teams form one circle and pray. After a long year of organising the competition, ground official duties, organising the presentation and everyone has left, Terry has a rubbish picker and is cleaning the ground.

I am later reflecting on my experience and am speaking to Steven from Badu. He explains that it takes them four hours to get to Thursday Island by boat every Saturday to play. Then they travel the four hours back. It cost the side over $1000 per week to play. They did not forfeit a match this season. Steven didn’t make the final squad due to injury.

He says it hurts as it is a special feeling to run out with your brothers, cousins and uncles to represent the Tigers and their legacy.

I have learnt the past week that this is such a special place. The history, the people and the culture. The ocean and the landscape. The way that rugby league players are the modern day warriors. The respect the players have for their opponents. The power and the passion of which the game is played. The volunteers that do multiple roles. The way rugby league means so much these communities and how it brings everyone together.

The way it makes me feel reminds of why I fell in this love with this great game in the first place.

Thank you to the NPA and Torres Strait communities for this inspirational experience; this is a moment I will never forget.