With the Rugby League World Cup set to kick off in October and the Intrust Super Cup beginning in March, Townsville Blackhawks coach Kristian Woolf is set for a busy year.

Preliminary meetings were held with the Tongan Rugby League board in regards to sponsorships, finances and a proposed pre-tournament training camp and trial match.

“The overriding response was all very positive towards what we want to do with the group,” Woolf said.

“Everyone there is looking forward to the World Cup and we want to start our preparations early to give our team the best chance possible at being successful.”

The popular duo were also kept busy with local coach updates, interviews at local television and radio stations and were excited to give a presentation at Digicel, which is one of the biggest telecommunication companies in Tonga, on how rugby league relates to being in a workplace.

Although there were plenty to choose from, a highlight of the trip was a visit to Hurrell’s former high school, Tonga High.

“It was great to see the reaction of the kids when Konrad first walked in,” Woolf said.

“You could tell they were so excited to see him, and they are so well behaved.”

With the Tongan team not announced until after the NRL season, Woolf said he is currently recruiting for vacant positions in his staff.

“We have a skeleton group that have been together for the past few years and obviously being a World Cup we are going to need some extras,” he said.

“Playing wise, hopefully most players (will) come from the NRL and (are) playing regular (games) and well at that level.

“That’s how we become more competitive with the big nations.”

For tickets and more information on the Rugby League World Cup including games to be held in Townsville and Cairns, visit www.rlwc2017.com. 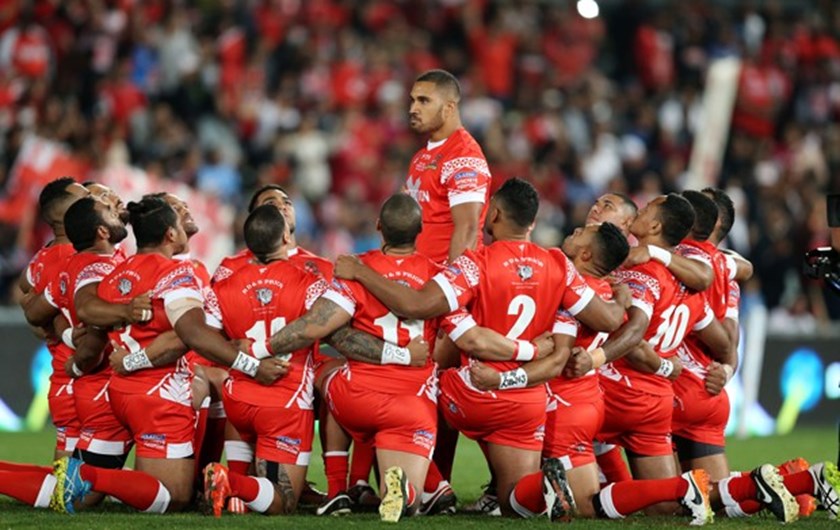 The Tonga team before the Pacific Test against Samoa in 2016. Photo: NRL Photos