The Central Highlands Rugby League season is set to kick off this weekend and ahead of the opening round, we preview the top 10 games that shouldn't be missed this season.

The last time these two sides met was in last year’s semi-final and saw the first ever extra-time in the Women’s competition following a 20-20 draw at fulltime.
Blackwater haven’t won a game in Bluff yet, losing both semi-final matches in 2015 and 2016.
Will the Crushettes be able to break the Bluff curse?

This year's season gets underway with XXXX Rivalry Round.
The annual Kelly O’Brien Shield between Bluff and Blackwater will kick-off Round 1 in the eastern parts of the Central Highlands.
Bluff have dominated the shield in previous years but can Blackwater turn it around with their new recruits?
This game will follow a full day of Juniors in Bluff in a competition first and also a Ladies grudge match between Blackwater and Cowgirls.

Tigers and Clermont meet in Round 1 as part of the traditional annual rivalry Anzac match played between these two sides.
The Clermont Bears Ladies will be hungry for the win over Tigers after last year’s defeat in the Women's grand final.
The Men’s clash will be just as close.

In Round 2, the Dysart Bulls and Clermont Bears will contest the Bob Baird Shield.
The shield changed hands last season with Dysart’s impressive 66-6 win over the Bears.
The last time Dysart won the shield prior to last year was in 2011.
This year’s shield will be contested by both Men and Women with both scores being totalled for an aggregate total.

The Allen Johnson Memorial Shield is up for grabs in Round 3 as the Springsure Mountain Men and Middlemount Panthers do battle in Middlemount.
Allen Johnson was a local stalwart who played for both clubs.

Last year’s match between these two sides for the Paul Taylor Memorial Shield was described as one of the best games of footy ever played with Jared Owens kicking the winning field goal with ten seconds to go.
The Tigers haven’t been able to secure this piece of silverware since its inception in 2015, so could this year be their year?
We’ll find out at 4pm Sunday, May 28 in Springsure.
The Emerald Tigers and Cowgirls will play off in a curtain-raiser match at 2.30pm as part of expanding the women’s game to towns without women’s teams. 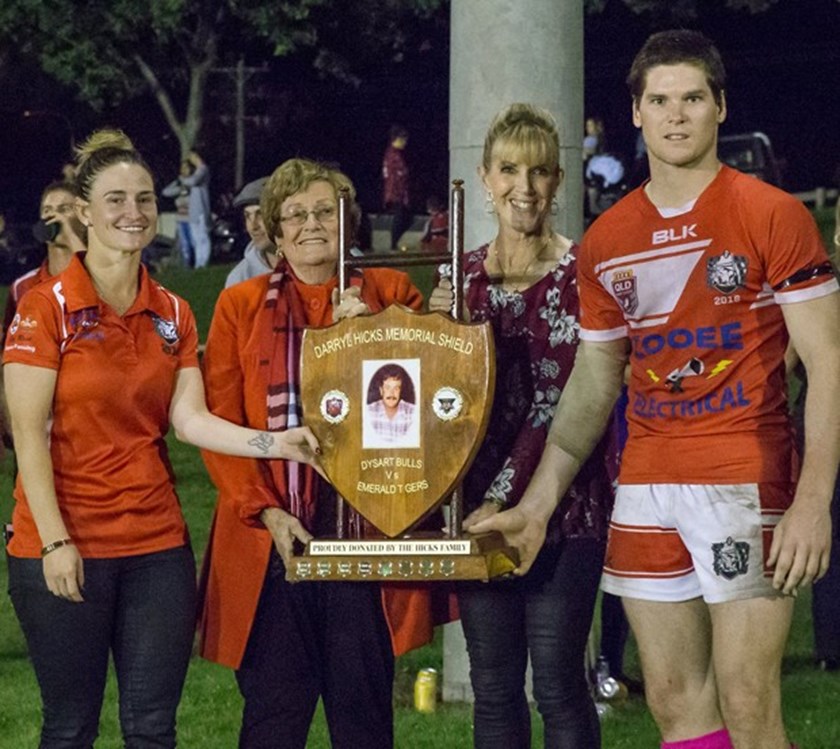 The Dysart Bulls were successful in winning the Darryl Hicks Memorial Shield last season defeating the Tigers with an aggregate score (Men’s and Women's) of 58-48.
The last time Dysart won the shield was in 2011.
Dysart were the only team to defeat last year’s premiers both times in the home and away season.
Will the Hixy Shield remain in their trophy cabinet?

The Emerald Tigers and Emerald Cowboys will face off for the Duroux Shield in Round 7 at McIndoe Park.
A double header with the women on first, the showdown will draw a huge, vocal crowd as always.
There is no day like derby day – may the best team win.

As announced last month, Clermont will host an Intrust Super Cup Country Week game with the Central Queensland Capras making the journey west to play the Redcliffe Dolphins.
The Men’s competition breaks for this weekend with only Clermont and Dysart locking horns in a traditional grudge match.
The Women’s sides will play off in a double-header prior to the Cup game with the Cowgirls taking on Dysart and Clermont hosting Blackwater.
Juniors will be played through the day as part of the Country Week event.

A highlight of Women in League Round is the Polly Pratt shield clash between the Cowgirls and Tigers.
Karen ‘Polly’ Pratt was a much-loved supporter of both teams and was a mother-figure to many of the boys and girls in their junior years who are now playing senior footy.
This game will be played in the prime timeslot of 7pm as the ‘main game’ of the night. The Central Highlands Rugby League will also be hosting a number of charity/cause rounds to spread awareness and support to different organisations and causes.