Wests Tigers piled on six tries to record their equal-biggest half-time lead before staving off the fast-finishing Cowboys to register a 36-20 win at Campbelltown Stadium.

The stunning 34-0 scoreline at the break matched the margin the Tigers racked up against the Warriors back in 2004 before going on to win 50-4.

North Queensland roared to life in the second stanza, scoring three tries in a seven-minute period, but they couldn't erase the earlier damage.

Injuries to Alex Twal (MCL, 29th minute), Robert Jennings (hamstring, 31st minute) and Zane Musgrove (foot, 62nd minute) left the Tigers with one fit man on the bench at game's end so the win came at a cost.

A Tigers official said Twal could be out for a month. He will have scans to confirm the damage.

Maguire said his team were "filthy on themselves" after their sub-par finish to the match.

"It's around our attitude and those sorts of things that I've been talking about [that they were disappointed with]," Maguire said.

"It's good to see that they're willing to talk about what they need to do and make sure they fix that up."

The coach heaped praise on hooker Harry Grant, who contributed a try assist, 95 metres and 42 tackles in an 80-minute display.

"He's just enthusiastic, he's just a competitor, he works hard, you see him in the picture all the time. That's what you want in your No.9," Maguire said.

"[But] I thought it was a real team performance in that first half. We spoke about what we wanted to do and we were able to go out and do it, but we need to make sure that we lock down 80 minutes. That's our big key."

Despite the victory, Maguire said he hadn't necessarily settled on his line-up, with veterans Benji Marshall and Chris Lawrence still on the outer.

"I'm continually going to look at each week and we'll go from there," he said.

Tigers winger David Nofoaluma constantly punched through the line, posting 129m in the opening half to go with a line break and six tackle busts.

Grant was a constant danger as he schemed around the ruck, benefitting from quick play-the-balls and offloads.

Possession wasn't the problem for North Queensland – they had 53 percent of the ball, including a glut of tackles inside the opposing 20 metres, and completed 33 of 38 sets overall. But their attack initially posed few questions of the black and orange unit.

BJ Leilua strolls over on the right edge

The writing was on the wall from the outset as the Tigers scored after little more than a minute. A rare error from Cowboys lock Jason Taumalolo put the home side on the prowl, with prop Musgrove then crashing over for the first try of his 31-match NRL career.

North Queensland had the opportunity to strike back immediately after Josh Reynolds dropped the ensuing kick-off, but some stiff goal-line defence held them at bay.

The Tigers inflicted more early pain when Joey Leilua found himself in space after an Adam Doueihi pass before swatting away Scott Drinkwater to touch down in the eighth minute.

Another Cowboys raid was killed by a Nofoaluma intercept. The winger was quickly chopped down on that run but he had a major hand in a spectacular try moments later.

After Grant's kick from dummy-half ricocheted off the defence, Reynolds linked with Nofoaluma who threw an audacious cut-out pass to the opposite side. Moses Mbye burst into the clear, dummied past one Cowboy, and sent halfback Luke Brooks under the posts.

Once again, the Tigers made an error after scoring and invited North Queensland to respond. Once again, they failed to capitalise on the territory as Michael Maguire's men held firm.

Momentum strongly behind them, the Tigers notched their fourth try in the 26th minute via front-rower Josh Aloiai. He poured through a gaping hole after Grant jumped from dummy-half close to the line, squared up and delivered a neat ball.

Twal limped from the field but the onslaught continued when Mbye threw a precise pass for Jennings to cross, hurting himself in the process.

Yet another Nofoaluma bust got the Tigers in position for their sixth four-pointer. A cross-field Reynolds kick fortuitously bounced off Michael Chee Kam's boot and, summing up North Queensland's night at that point, into the path of Mbye in the in-goal.

It took an 85-metre Drinkwater intercept try to finally get the Cowboys on the board in the 55th minute – and it opened the floodgates.

Winger Kyle Feldt soared high to collect a kick and score their second try and then quickly finished off another movement to give the Cowboys a sniff.

Feldt scores his second as the Cowboys continue to surge

Musgrove was assisted up the tunnel as Mbye lined up a penalty goal to extend the Tigers' lead and restore some calm among his troops.

The Cowboys thought they had gone in again with 10 minutes to go but a foot on the sideline from Ben Hampton, playing on the wing in place of Feldt who was off for a HIA, denied the points.

Esan Marsters steamed onto a kick to score against his former team in the 77th minute to add a touch more respectability to the final score. 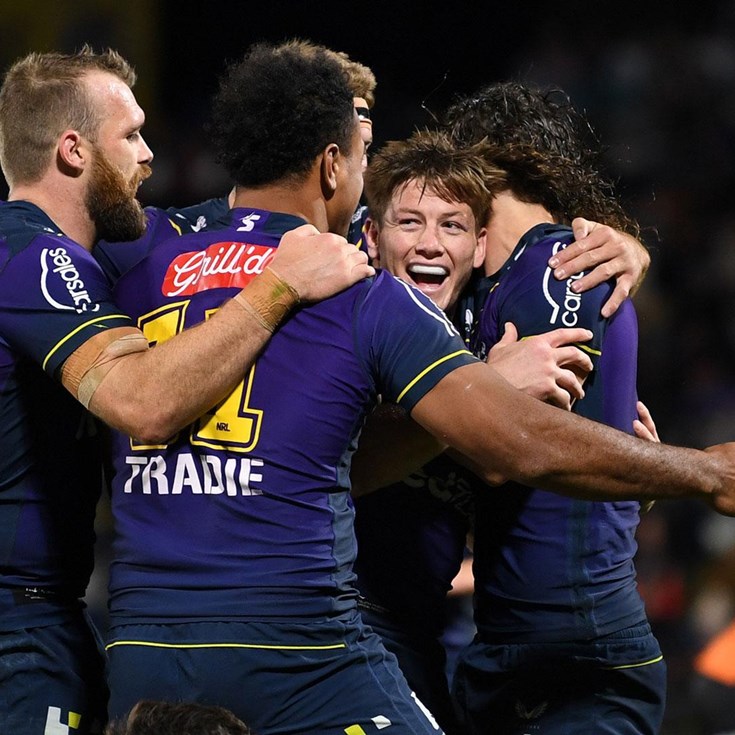