Finals Week 2 in the Hastings Deerings Colts will decide which two teams will proceed to the preliminary finals where lying in wait are the in-form Sunshine Coast Falcons and Redcliffe Dolphins.

Pizzey Park will be the ground where either the Souths Logan Magpies or Townsville Blackhawks stake their claim to continue their 2021 season.

The Magpies are coming off a big a 78- 6 win over Tweed Seagulls last week at Marsden State High School.

It would be hard to find a fault with their performance, as scoring 14 tries in a final doesn’t happen too often and it will probably be a long time before it happens again.

Feao Maka, Billy Mozer and Tyrone Harding all scored doubles while Cruise Ten scored one try and made 181 metres for the Magpies.

However, Souths coach Lincoln McLeod said he knew such a big win might bring problems.

“The best thing we can do is forget about last week,” McLeod said.

“We showed plenty of defensive resolve and went on with it which made me happy.

“If it wasn’t my team they were doing it to I would have enjoyed watching them.”

Lining up to take on the Magpies is the Townsville Blackhawks, who will confidently take the field having beaten Souths 36-18 and 44-12 their last two battles.

The Blackhawks have won three of their past six and are coming off a 40-16 loss to the Dolphins.

Townsville scored first and would have been happy with 4-0 after 13 minutes, but it all went wrong from there with Redcliffe scoring the next 22 points to lead 22-4 at half time.

The Blackhawks didn’t score again until the 59th minute and that will be something they need to fix.

“We only had four players that have played finals in 2019, so that’s out of the way now and we have all played a final and realised it goes up intensity,” Elliot said.

“Souths were very good, they played very fast football and Tweed got frustrated and went from their structure in defence.

“Souths will be confident and I think this will be a really good game.”

Jordan Lipp however celebrated his new Cowboys development contract with 111 metres and Adam Mitchell made 36 tackles.

Lipp is the Colts leading try scorer with 16 tries and if the Blackhawks are to move on to Week 3 of the finals, he’s going to have to play a big part.

“Lippy would be the first to admit that he probably didn’t have his best game week one but he knows how to fix that,” Elliott said.

“I think Zac Laybutt has been excellent for us this season too, so our centres will play a big part in this game again.”

Next on the finals menu for will be Wynnum Manly Seagulls taking on Mackay Cutters. The Cutters dealt with the Tigers in Week 1 winning 38-14.

The Seagulls and Cutters have clashed in finals before, with Wynnum Manly getting the result 34-6 in 2019.

The Cutters and Seagulls fought out a 22-22 all draw in Round 7  this year.

Henri Stocks is the go-to man for the Cutters and he will be again this week.

The young half bent his back and did some heavy lifting with two tries and seven goals to lift his side through the first round and onto bigger things.

Stocks now has 136 points this season and will be looking to add to that tally this week against Wynnum.

Flynn Camilleri dug his heals in and got the Cutters out of trouble and onwards up the field with 244 metres.

The Cutters dominated everything with 59 per cent of the ball and 85 per cent completion – it was a perfect finals effort.

Cutters coach Tom Heggie was happy, but knew finals could find a way to hurt you if you get too far ahead.

“We were certainly happy with our win and the guys were great,” Heggie said.

“We have worked really hard on getting through tough periods and knowing that we can come out the other side.

“It was 14-0, but we were always confident that we’d get through and then could play after that.

“I think our strength is being able to starve teams of the ball and that’s no secret and certainly that will be the plan this week again.”

The Seagulls might be the team wondering what happened last week after finishing the year at the top of the table. They were the team to beat and looking finals ready.

Wynnum Manly coach Michael Dobson was reflective, but was ready to move on.

“We didn’t have to say too much the boys are self-aware and know that wasn’t our best,” Dobson said.

“We were overconfident and maybe a few thought we would just roll up and win, but they know now that doesn’t happen in finals.

“The Falcons turned up exactly how we said they would; we didn’t combat it.

“Mackay are the form team of the competition so we know this week is going to be tough and now it’s sudden death.

“The loss could help us, a good wake up and learning that finals wins don’t just happen.”

Wynnum Manly had two tries inside the first 24 minutes and everything going to plan, but then it all fell away as finals do sometimes.

The first thing the Seagulls will be looking to fix will be their possession, they just didn’t have enough of the ball and didn’t complete their sets when they did have it.

Ben Farr was tremendous for the Seagulls however with 137 metres and Alec MacDonald made 36 tackles. 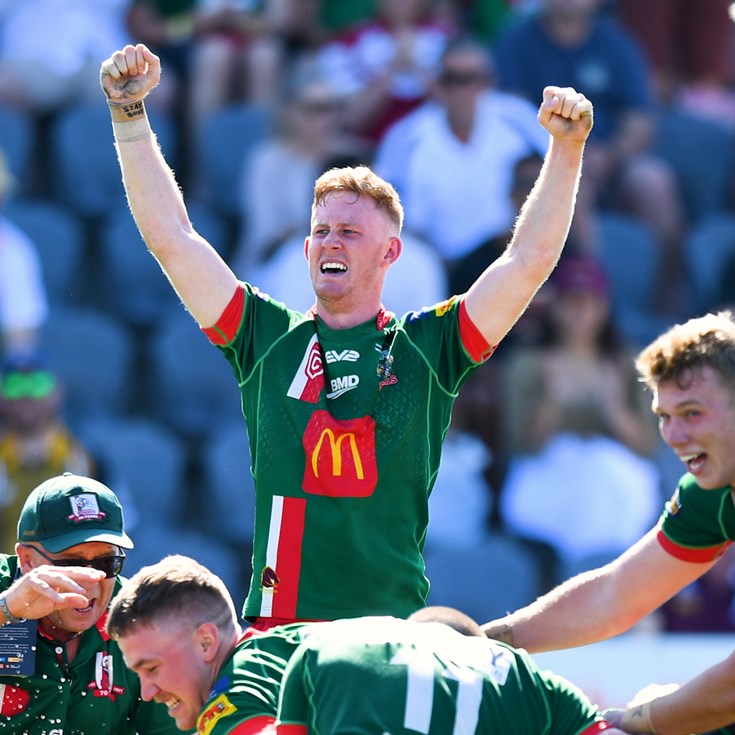