With butterflies in their tummies and the roar of the crowd in their heads, the U-9 Clermont Bears and U-9 Dungog Warriors took to the field of ANZ Stadium last night (June 1) for the inaugural Holden Junior State of Origin.

The event was the icing on the cake of a three-day experience for the youngsters, which began on Monday when they arrived in Sydney from their home towns – the central Queensland bush town of Clermont and the recently flood-affected NSW town of Dungog.

For eight-year old team captains Roman Revell-Blair from the Bears and Charlotte Baker from the Warriors the chance to represent their state was a dream come true.

“It was so awesome to play at ANZ Stadium – I just couldn’t believe we were there.  I even got to toss the coin for the State of Origin game and when Cameron Smith called ‘heads’ and I tossed ‘heads’ I just knew it was going to be a good night for the Maroons,” Roman said.

For pocket-rocket Charlotte, the highlight was definitely the guard of honour.

“We got to high-five the Blues and the Maroons when they came back on to the field at halftime which was so amazing,” she said. 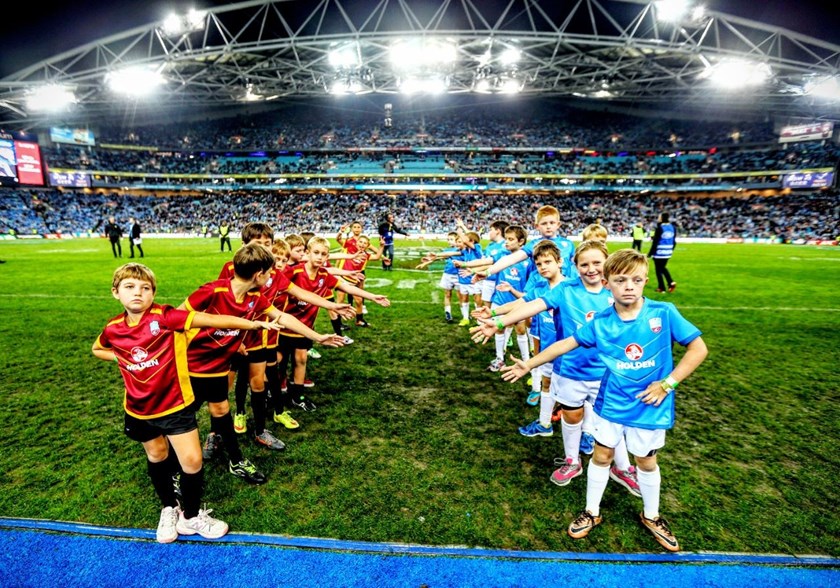 As part of their preparation, the kids participated in a special training session the day prior to their big game with rugby league legends Matt Cooper and Mick Crocker.

They also took a behind-the-scenes tour of ANZ Stadium with Petero Civoniceva – checking out the players' change rooms and warm-up rooms and running out on to the ground via the players’ tunnel.

The Dungog juniors got a rare access pass to attend the NSW team’s Captain’s Run training session, while the Clermont kids joined the Queensland State of Origin team on their players’ walk in Parramatta yesterday.

Maroons skipper Cameron Smith wished the young hopefuls well as they joined in the walk.

“I’ve seen you kids on social media – you’re legends!” Smith said. “Just get out there, do your best and have fun,” he said.

Despite a nil-all draw in the juniors game, the kids were all winners, having had the chance to meet their heroes and form fantastic friendships and memories along the way.