The incident occured in the 50th minute and the 2015 grand final star looked to have suffered a concussion which then ruled out of the match by Queensland doctors.

However, he said he remembered the incident clearly and believes he'll be right to face the Knights on Saturday night.

"How can I forget?" he laughed.

"I remember thinking 'Oh, here comes this big bloke' and that I was going to get in there and do my best. He's a big unit and he had a bit of room to wind up there.

"I passed all the tests once I walked into the sheds, so yeah, I'm fine. I have no ill-effects of a concussion at all. At the moment I would think [I'd be right to play the Knights].

"I might have to do a test later this week but I feel fine. There's no dizziness, no headaches, no nothing. I expect myself to back up. I only played 20 minutes and besides the head knock I have no reason not to back up." 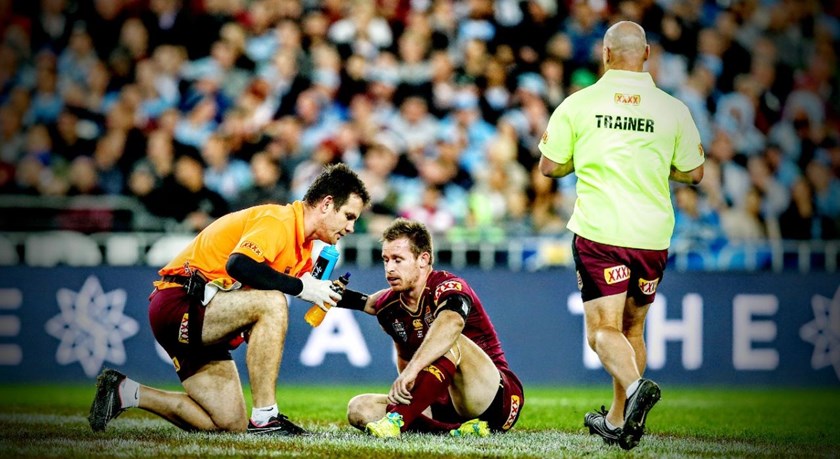 Michael Morgan is treated on the field after his run-in with Blues bruiser David Klemmer.

It raises the question: Why was Morgan ruled out of returning for the Maroons?

"The only reason was because of the footage. They said that I stumbled a bit as I was getting up and as I was coming off," he said.

"I was more dazed than anything. It was just one of those things that rock you a bit and you have to find your feet again. I would've been fine to come back out but the decision wasn't in my hands."

Even though Morgan's time on the field was cut short, he couldn't hide his pride over Cowboys teammate Justin O'Neill's debut performance for the Maroons.

"I'm very proud. He's worked really hard the last couple of years and it's good to see him finally get here and do really well," Morgan said of O'Neill.

"I'm extremely happy for him and hopefully he has a good future here."

*This report first appeared on NRL.com