Origin isn't just about screaming yourself hoarse at the game - it's about celebrating, commiserating (occasionally) and analysing every big moment with your mates afterwards. And can you think of a better way to soothe that maroon-tinged throat than with a cold bevvie or three?

For those lucky enough to have scored a precious ticket to Suncorp's lone Origin game this year, there's more to life than a crowd crush on Caxton Street. Here's our selection of the best watering holes within striking distance of the stadium to keep that Origin buzz going. After all, who wants to fight a crowd to end up at a dud venue. That'd be soooo, NSW.

Choose wisely and kick on, champion XXXX Queensland Maroons fan. What you thought was the final whistle was really the starter's gun. Treasury Casino & Hotel
Top of Queen Street Mall, Brisbane (07) 3306 8888 ​
It's the official post-game venue for Game II, and you're therefore guaranteed to find the party in full swing, with rock legend Darryl Braithwaite live, and an appearance by Jharal Yow Yeh. There will be freebies everywhere, including 500 18th Man shirts, and be sure to chuck your name into the hat for a chance to win the ultimate Maroon Throne (worth $7500). It'll be the kind of party that'll sneak up on you; we dare you not to find yourself holding your phone in the air yelling, "Sing Horses, sing Horses!" at three in the morning. Darling & Co
157 Given Tce, Paddington  (07) 3367 9800
You've gotta love a bar that takes a good hard look at itself and says, "How can we cram even more drinking fun into this place? I know - a pop-up beer garden in the car park!" It's genius concept made even better by the convoy of Brissy's best food trucks pulling up outside, plenty of drink brands vying to whet every whistle in the place and the fact that this is a bar a mere JT conversion from the stadium. Darling & Co are calling this shindig their "Fan Fair", and on this info we reckon there'll be a fair few fans there. The Charming Squire
3/133 Grey St, South Brisbane  (07) 3077 7254
There's something comforting about drinking beer in a place with great back-lit vats of the stuff elevated above the crowd. It's like a giant monument to beer, which pretty much sums up the entire venue. After the game, hop a train to South Bank where you can fall out of South Brisbane station and into this venue that was built by the folk that came up with James Squire beer range. They prioritise all the important things here: spit-roasts, live music and a massive range of cold beers. Hell, they even sell wine, apparently. 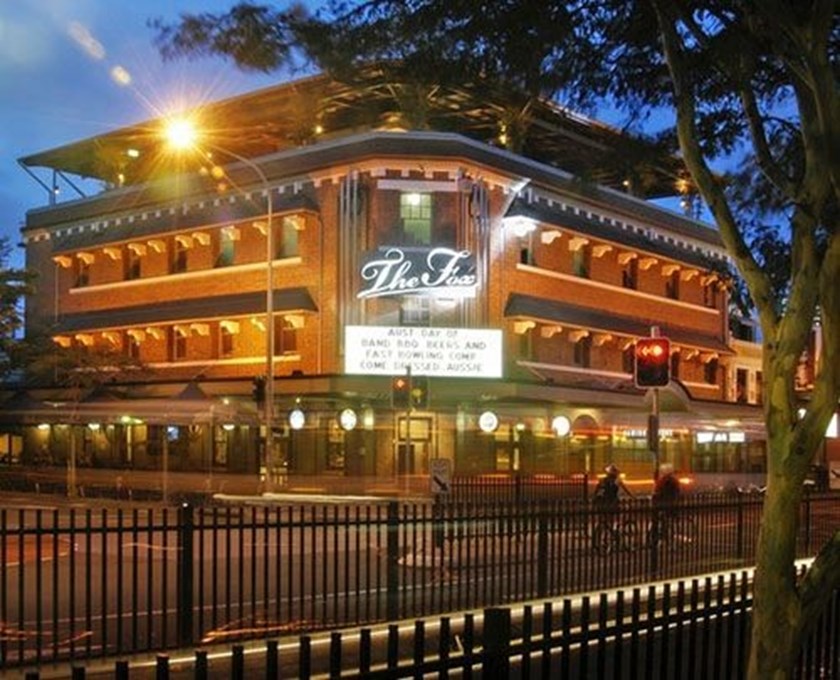 The Fox Hotel
71-73 Melbourne St, South Brisbane (07) 3844 2883
Turn left instead of right coming out of South Brisbane station and you'll soon spy The Fox - a multi-level monument to partying on the main drag of South Brisbane. There'll be a monster screen showing the game and for $35 clams a head you can score pizza, draft beer, house vino and cocktails from whistle to whistle. Get you tickets for that deal here, and after the glorious XXXX Maroons victory, head upstairs to where the young and beautiful people hang out. Pretty much the higher you go, the hipper you become - all the way up to uber-cool Dandy’s Rooftop. The Jubilee Hotel
470 St Paul's Tce, Fortitude Valley  (07) 3252 4508
"The Jube" is a Valley institution that has continued to evolve over the years - from a workers' watering hole to an easy-going venue with something for everyone. It's a short walk from the main Valley haunts and around the corner from Fortitude Valley station. With plenty of bars to choose from, you'll want the one that furnishes your mouth with pizza and a Corona for $15, or maybe go for the four-Corona bucket deal for $20. They'll have massive projector screens running hot, and plenty of entertainment after the game to keep a good thing going! Farrier
164 Arthur Brunswick St, Fortitude Valley  (07) 3254 2748
Just off the James St glitter strip in the Valley, it's all iron, brick, leather and moody lighting at Farrier. You know it's cool because it's not just a bar but a "bar and supper club" and they're open till the wee hours, even on a Wednesday. This is not the type of place for footy-focused specials, but if higher-end bar eats with a Spanish twist are your thing, pull up a cowhide pew and settle in. They love a devilish cocktail at Farrier - hop into a few Pagan Rituals (666 Butter Vodka, Fireball Cinnamon Whiskey, Chile sugar) and you'll thank god you did.
Editor’s note: This is a sponsored article and proudly endorsed by qrl.com.au. Thank you for supporting the sponsors who support rugby league in Queensland. Email for inclusion or more information.