The Indigenous All Stars were all class last night in defeating the CH All Stars 34-22 in the annual Central Highlands All Stars match at McIndoe Park, Emerald.

A late resurgence from the CH All Stars saw two tries scored in the last five minutes but the Indigenous side were able to hang on and lift the trophy up for the first time in the occasion’s short history.

The traditional owners of the land opened the night, performing a traditional dance in front of both sides and the large crowd who braved the cold on Wednesday, July 6. Congratulations to David Brice from the Indigenous All Stars and Sam Clayton from the CH All Stars who were awarded the players’ player awards for both teams.

All Stars organiser Andrew Doyle after the match said that it was very special to see this game grow from last year and it meant a lot to him and the Indigenous people in the Central Highlands.

“It was great game to play in last year and to see it grow this year is great to see,” Doyle said.

“It means a lot to me to play in this game to celebrate NAIDOC week and I want to thank everyone who has been involved in making it happen, including the players, coaching staff, referees and all of the spectators who came to watch tonight.” 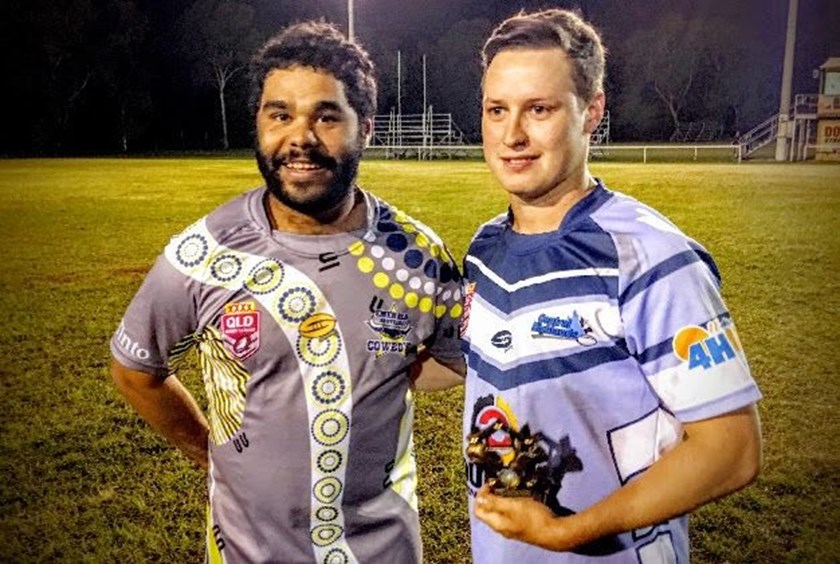 Sam Clayton, right, players' player from the CH All Stars, with Andrew Doyle.

Former rugby league great and current NRL One Community ambassador Preston Campbell made the journey north to play in the match for the second year running and said he thoroughly enjoyed the night and was looking forward to future matches between the two sides.

“It’s great for all of these players to volunteer their time and play in a great game of football to celebrate NAIDOC week,” Campbell said.

“This is the second year I’ve been involved in this match and again it was a great success. I’m already looking forward to next year’s clash.”

The annual Indigenous All Stars vs CH All Stars is set to be a regular fixture in the Central Highlands calendar and both teams are already keen to line up for next year’s clash.

Thanks to the players, coaching staff and referees who made the night possible. The game was played in good spirits and was a great spectacle to witness.

Also thanks to the Emerald Brothers Junior Rugby League club who worked in the canteen, and to: