In freezing conditions, Pittsworth took care of an improved Wattles at Pittsworth on Saturday night. Wattles held the Danes at 14-12 at half-time after leading 14-0 until the competition leaders sealed the game with an impressive second-half display. Cameron Miller had his best game of the season for the Danes. Michael Carpenter also played well for Pittsworth. Whilst captain Dale Perkins and Nick Morris were Wattles’ best.

Clive Berghofer Stadium officials called off all games between these two clubs. A Toowoomba Rugby League board meeting on Monday night will discuss the playing of the Second Division President Cup at a later date. It is expected each side will receive one point each on the ladder.

Brothers were much too good at home for the Oakey Bears as they piled on 68 unanswered points. Oakey were able to stick with the Leprechauns for the first 15 minutes but once the scoring began the floodgates opened and Brothers piled on the points. Oakey’s lack of fitness and, at times, lack of commitment to the tackle meant they were no match for Brothers speed and strength. Oakey were also guilty of poor ball control and they turned position over too often and Brothers took advantage of the glut of possession and territorial superiority. Brothers ran in 12 tries with winger Josh Davies recording a hat-trick alongside doubles from fullback Marcus Cochrane and backrower Jake Head. The points tally has allowed Brothers to grab third spot on points difference from Souths, whose weekend game was washed out.

Brothers continued Oakey’s forgettable season by trashing the Bears at Terry Mickleborough oval on the weekend.  Ricky Davies, Michael Cochrane and Marcus Cochrane were the chief destroyers for the Brethren.

Dalby travelled to Goondiwindi at the weekend expecting a tough game against an improved Goondiwindi side. They dominated the Boars in a clinical display. Lock Tom Boland and centre Brayden Alexander were the Diehards’ best.

Dalby led 20-nil at half-time and went on with it in the second half for a convincing win. 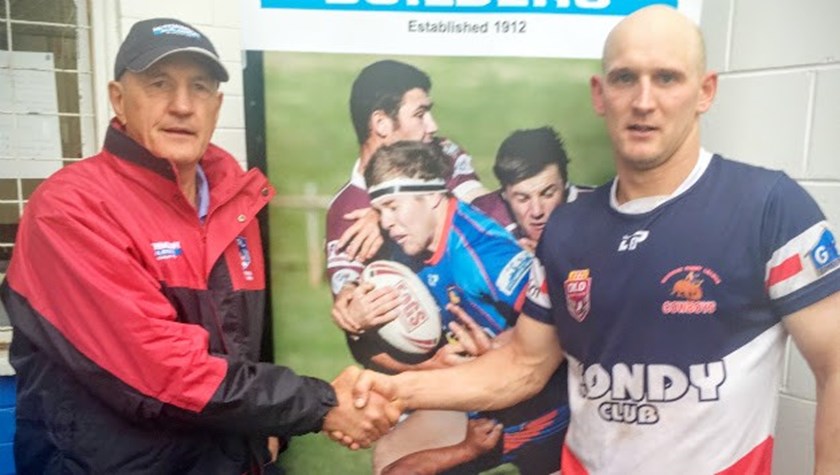 Warwick is the second team in a week to give the rest of the competition a message. The Cowboys clinically took care of Highfields at Father Ranger Oval this weekend. Warwick scored six tries to one and outplayed the Eagles, especially in the forwards. Cowboys Trent Richardson, Sam Broomhall and Mick Broomfield completely dominated in defence and followed up with consistent offense. Their “go forward” allowed halves Paul Cantrell and Ryan McIvor to dominate their opposing halves.

After leading 10-4 at half-time courtesy of tries from Sam Broomhall and Mick Bloomfield, Warwick wore down Highfields in the second half. Their defence pressured Highfields into a mistake-riddle game.

Highfields played their worst game of the season with uncharacteristic errors at crucial times. Rep halfback Jared Lee had a game, by his own admission, he could forget.  But it was all Warwick and it was summed up by their last try where Cowboys second rower Ty Gardner broke the Highfields defence out wide with fellow forwards Sam Broomhall and Trent Richardson in support to score a 70m try.