Belinda Sleeman’s involvement with the local touch football competition in Rockhampton provided the pathway for her entry into refereeing and now the NRL match official has come full circle by joining Queensland Touch Football in a full-time media role.

Sleeman and Kasey Badger are the only two female referees to have officiated in an NRL fixture to date and as Sleeman continues to work towards becoming a full-time referee, her new role with Queensland Touch allows her to fully immerse herself in rugby league's various arms.

A journalism graduate, Sleeman has worked with the Queensland Rugby League and at The Courier-Mail most recently, but told NRL.com the chance to help build the profile of touch football in Queensland was an ideal career opportunity.

Sleeman started her new role as Marketing Communications Manager with Queensland Touch Football on Tuesday and admits that in many respects it sees her come full circle.

"That's one way to look at it for sure," Sleeman said.

"That was my first taste of refereeing any sport, was in touch, and I made the transition over to rugby league from there.

"I was playing two or three nights a week and because I was down there all the time they needed some referees so I filled in and did some games and then I did more and more.

"I was refereeing open grade men’s games in touch footy and I really enjoyed it.

"It was obviously challenging doing those higher level men’s games and someone approached me and asked whether I'd ever thought about refereeing rugby league." 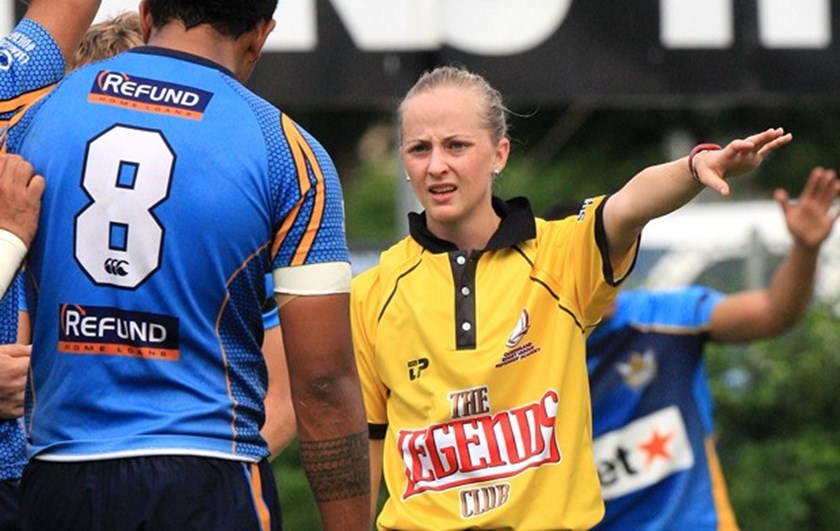 Sleeman worked with Queensland Touch CEO Jamie O'Connor when the pair were both at the QRL and O'Connor said that it was a chance meeting in the new RLC Queensland offices late last year that opened the conversation about coming on board.

"She was identified as someone who had the skill set and displayed behaviours that I see as important in what we're trying to build," said O'Connor.

"I pitched the concept that if she wanted to get into sports communication this is a really good opportunity because the role is so broad.

"There are many aspects to the role, and an opportunity for her to make it her own in some ways.

“She'll drive all of our social and digital communication – and we need some growth in that area – and then there's the internal and external communication, particularly with our stakeholders, which is a really important part.

"We need to make sure we are communicating effectively to all our groups and that will fall to her as well.

"She'll have a really broad role and that's what I pitched to her as part of the benefits of coming across and doing this role."

Former referees boss Robert Finch now heads up the NRL's Communications and Logistics division and sees Sleeman's appointment as another positive step in forging the relationship between the NRL and Touch Football Australia.

"It's no doubt a positive step for Belinda but also the game in general," Finch said. "It further reinforces the relationship that we have with Touch Football Australia.

"From the point of view of the officiating national structure, I believe there are a number of synergies with Touch Football Australia which will allow us to continue to work together.

"Belinda's appointment with Queensland Touch Football and her continuing development as an NRL official will enhance that."

And it is Sleeman's continued refereeing responsibilities and further development that O'Connor is conscious of encouraging as much as possible.

"I've said right from day one that I wouldn't encourage her to even consider the role on the basis that I'm going to restrict her and her growth and development and opportunities that are provided through the NRL," O'Connor said.

"We'll need to maintain flexibility around her schedule and it certainly won't be impacted on by coming across and working for us."

That flexibility is paramount to Sleeman who hopes to continue her development as a match official with more exposure to refereeing in the Intrust Super Cup and as a touch judge in the NRL itself.

"Obviously working in sport the flexibility is potentially there more so than in other roles. They know what I do in terms of refereeing and they're very understanding with that and very encouraging of that," she said.

"I've done a few Intrust games now and hopefully I will continue down that path this year and some more experience in first grade as a touch judge.

"Being involved in those games at the top level and with the other match officials that I run with, that's been really beneficial for me.

"I'm just really excited about the season ahead. I'm looking forward to another season starting again and seeing what the season brings."