We have a touchdown.

When former Washington NFL running back Silas Redd walked into the arrivals hall at Brisbane international airport on Tuesday morning it was one small step for a man and potentially one giant leap forward for rugby league globally.

The 25-year-old, who played 15 NFL games for Washington, is aiming to do a "reverse Jarryd Hayne" and make the transition from the NFL to the NRL.

He will play with the Ipswich Jets in the Intrust Super Cup initially and will join the club for his first training run on Wednesday night.

Redd watched on with keen interest as Hayne made the transition from the NRL to play with the San Francisco 49ers in the NFL, a journey he hopes to emulate in reverse.

"I know it is going to be hard work to switch over and play at the highest level, but that is something I am willing to put in the work for.

"I don't think there is any drop-off in athleticism between the NFL and NRL, and Jarryd was fearless. It was just a whole new game to what he knew and he was able to conquer it. I just hope I can put forth that same effort."

Redd has been analysing "a whole compilation" of wingers in the NRL and how they play the game, along with video of former Maroons star Chris Walker who will be his mentor at the Jets.

"But I have also been looking at Jarryd for the most part. How could you not? He is one of the best, I think ever," Redd said.

"I have also been watching how Chris Walker played back in the day. Chris's stop and go was second to one, and that was part of my toolbox when I played NFL… being able to change direction, stop on a dime and cut either way I need to go."

As a winger, Redd said a big challenge would be "not going out of bounds", or into touch.

"In the NFL it is not such a bad thing to go out of bounds because it doesn't mean we lose possession of the ball like it does in NRL," he said.

Redd was met by Ipswich Jets chairman Steve Johnson off the plane. They embraced and Johnson said "it was like hugging a piece of granite".

Johnson said Redd played 15 games for Washington "before he did his ACL and came back early and hurt it again", and that Redd's four years in the American college football system with Penn State College and the University of Southern California, followed by three in the NFL, was a great lead-in to his NRL quest.

"Without a shadow of a doubt I can't think of a better athlete coming to Australia from another sport to play rugby league in the history of our game," Johnson said.

"We spent a long time speaking to people in America about this and running back is the ideal position to transition into rugby league. It is in a contact position where you need quick feet and explosive power and Silas showed all those skills when he played a game for us in Hawaii.

"If he is successful it will open up a great opportunity to bring players into the Australian game and potentially grow the game in America."

Redd was in immense pain after suffering a knee injury and was subsequently suspended by the NFL after testing positive to cannabis.

"I do regret it but I do wish they would change the rules because I know personally a lot of guys who would rather subdue their pain that way than use painkillers and prescription drugs because that is an epidemic in America," Redd said of the episode.

"I did break the rules and plain and simple you are not supposed to do that. I've never been in any trouble with the law. I am not a messed-up person. I made a bad decision but if I hadn't made that decision I may not be here. One door closes and you never know what other door is going to open up.

"I take the positives that come with it and go from there."

Johnson said the Jets knew the story and were satisfied with Redd's explanation and his upstanding character.

"Silas explained to us from day one that he had self-medicated for the pain and he is certainly not a drug cheat," Johnson said.

"I have done my background checks at Penn State and everyone I spoke to spoke so highly of Silas."

Redd will fly to New Zealand with the Jets to play Ponsonby this weekend in a trial.

"However much playing time I get, or even if I don't get any playing time, just being with the guys finally is something I am looking forward to," he said.

"It feels like a new chapter in my book of life, the Queensland chapter I'm going to call it.

"It is a new journey, and something I am really excited about."

If he can achieve his NRL dream and be a success in rugby league then Redd's arrival on Qantas Flight 16 from Los Angeles on Tuesday morning could be the start of one of the most talked-about code switches in the game's history.

Redd is well aware of the story of Manfred Moore, also a running back, who made the switch from the NFL to play with the Newtown Jets in 1977.

Moore also attended the University of Southern California, Redd's alma mater, and is the only man to have scored both a touchdown in the NFL and a try at the elite level of rugby league.

"Manfred was a bit of a trailblazer, and here I am 40 years down the line trying to do the same thing," Redd said. 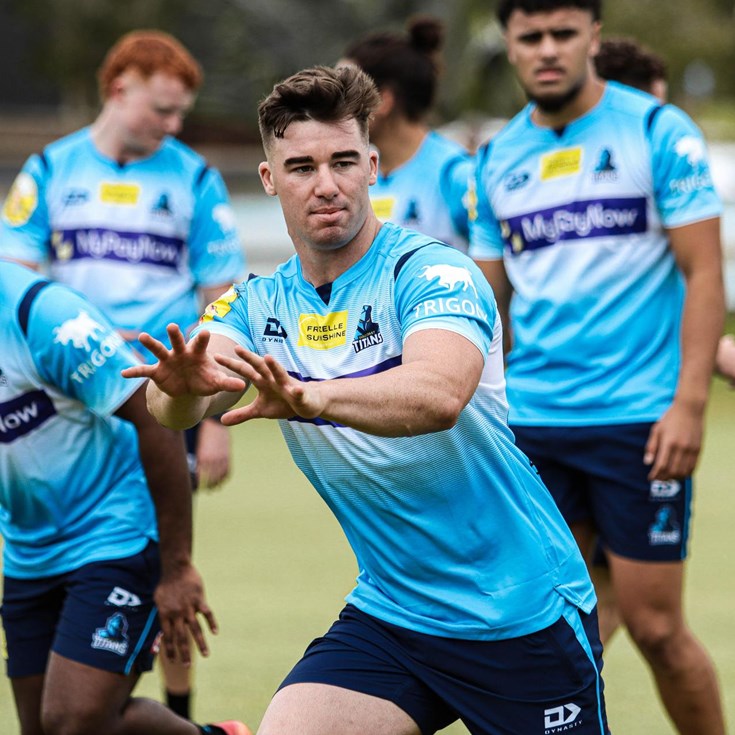