North Queensland Cowboys back-rower Gavin Cooper has accused unnamed Cronulla Sharks players of twisting the leg of prop Matt Scott in his return from an ACL injury on Friday night.

Cooper said he was close to "a couple" of such incidents in the Cowboys' 20-14 win, which he labelled as "disappointing".

Cronulla coach Shane Flanagan vehemently denied Cooper's claims, saying there was "not one bit of evidence" to support the Cowboys back-rower.

Cooper raised the Scott issue when asked how he rated the Queensland and Australian front-rower's first game back in the NRL since round two of the 2017 Telstra Premiership.

"I think there was a few little dirty tactics, a couple of guys twisting his leg and stuff like that the refs missed that was pretty disappointing after what he has been through," Cooper replied.

"There were a couple of little things that I saw… and hopefully we stamp that out of the game."

Cooper was quizzed on whether he told the refs and he said "definitely", before adding, with a chuckle, that he wasn't the captain anymore and that they don't listen to him.

Cooper was then asked whether he expected those tactics to be a regular thing, or whether it was more a reflection on the team the Cowboys were playing.

"What are we trying to start here people? What do you want me to say?" he quipped.

"There is a lot of feeling in Sharks v Cowboys games. There is always going to be something."

Flanagan's strong response to Cooper's claims will only build further tension between the clubs.

"I just went and watched every single carry of Matt Scott and there's not one bit of evidence to support whatever he is saying," a furious Flanagan told NRL.com.

Cooper said he did not expect the Broncos to adopt similar tactics in the clash at Suncorp Stadium on Friday night.

News of the exchange in North Queensland broke before the Broncos held their media commitments in Brisbane after training and hooker Andrew McCullough, also returning from an ACL injury, was asked whether St George Illawarra players had done the same thing to him.

"I didn't find that all, but Matty does a lot more hit-ups than I do," McCullough said.

"If that is the way it was then that is not in the spirit of the game."

McCullough said "no" when asked whether the Broncos would be employing those tactics on Friday night.

Scott also fronted the media in Townsville on Monday morning where he was asked about his teammate's statements.

"Any time you come back from a long-term injury you expect to be tested out a little bit but… I pulled up well," he said.

Scott was asked whether the Sharks were doing any knee twisting.

"Nah mate, I'll leave that on the field. You have a look at the video," he replied. 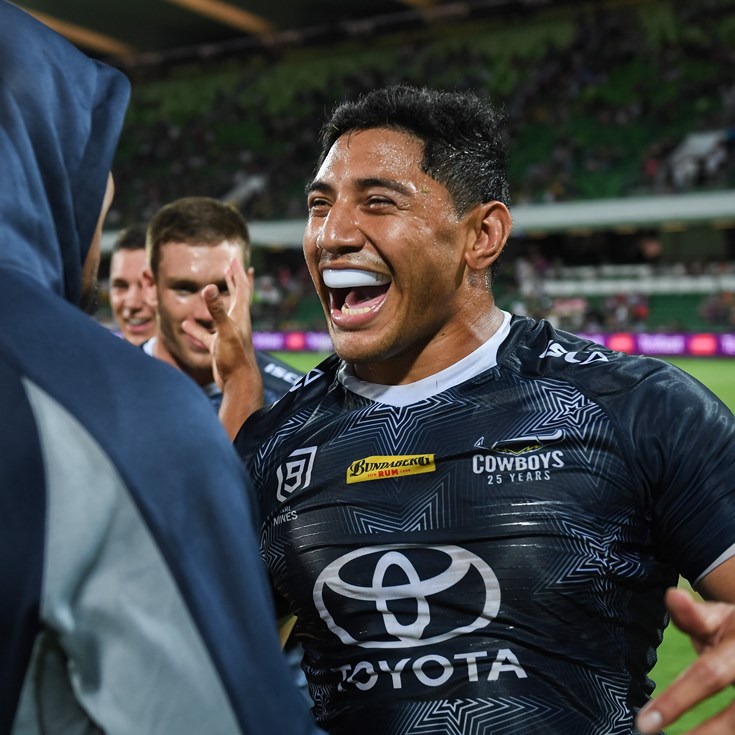