Manly Sea Eagles coach Trent Barrett insists Daly-Cherry Evans deserves to regain the Queensland Maroons jersey that he last wore in 2015 but says the team must start winning more games to help him achieve that goal.

Cherry-Evans did everything in his power to get the Sea Eagles home in Gladstone in the 32-20 loss to the Gold Coast Titans with an intercept try after a 90m run one of the typical game turning plays he came up with.

The Manly leader is in a contest with St George Illawarra half Ben Hunt for the No.7 spot for Queensland, a role Barrett said was not beyond his star player.

"He’s been one of our best players all season and I think his leadership this year and last year has been second to none," Barrett said.

"We all know what we can do and I'd like to see him get an opportunity [in Origin] to do it. I think we can help him as a team by winning our next block of games. That's important for us."

Cherry-Evans agreed the battle for the coveted Queensland halfback spot was wide open, but reiterated that if he was playing in a winning side his case for a recall would have more weight.

"Usually the best players in Origin are a reflection of the best sides in the competition so as a team if we can bond together and win some more games I have no doubt we are going to see a couple of players, not just me, get an Origin jersey this year," he said.

DCE goes all the way

"There is still a lot of footy to be played and I certain won't be getting caught up in individual battles [with Hunt].

"It sounds like it is fairly open for the spot so hopefully in the next month I can play some good football and put my hand up when the selectors pick the side."

The Sea Eagles have been hit hard by injuries with Curtis Sironen and Kelepi Tanginoa gone for the year and Tom Trbojevic failing a fitness test on game day. But Barrett did not use that as an excuse in a game where his side battled hard.

"It was brave and it was a really good effort to get back into the game [from 20-8 down] but I thought we were our own worst enemies at times with two tries conceded off our own errors and two tries off last plays," he said.

"We still scored 20 points and that should have been enough to win the game."

Five-eighth Lachlan Croker suffered a head knock that reduced his game time in the second half and winger Brad Parker "had a severe case of vomiting just before warm-up" which resulted in Jonathan Wright making his debut for the club, after stints at the Warriors, Cronulla, Canterbury and Parramatta.

"Losing Crokes at a pretty important time in the game forced a pretty big reshuffle as well…but I still think we had our chances to win the game,” Barrett said.

"We get back home to Brookvale next week and that is a really important one against the Tigers who are going really good.

"We have to get some troops back on the field and dust ourselves off." 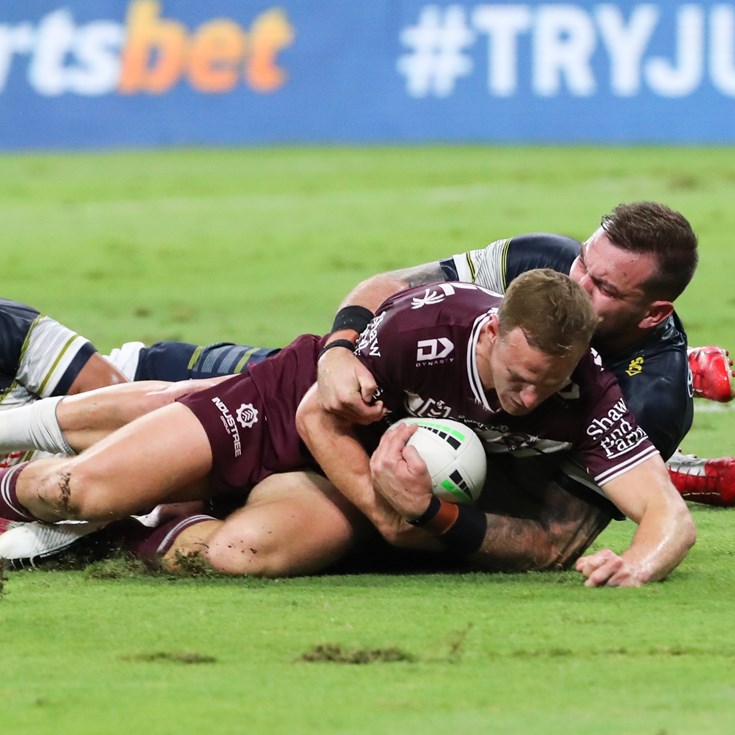 Sea Eagles get past Cowboys and into the eight