Billy Slater is playing as well now as he ever has and I am going out on a limb to say he is the best fullback to ever have played the game.

Billy came back last year after two serious shoulder surgeries which had me wondering whether he would ever get back to his best. I was worried he would do his shoulder again and that would be it.

Instead, he's come back with a fresh mind and a fresh set of legs and is moving as well as he ever has.

He's worked a lot on his fitness and his sprint training. You would think a guy of 34 would start slowing down but I watched him closely against the Brisbane Broncos the other night and Billy is as quick across the ground as he ever was. He's backed that up against the Warriors with another blinder and won the Anzac Medal to boot.

He's lost nothing physically, but mentally he is as switched on and positive with his play as ever.

Billy Slater scores tries and he sets them up. He has now scored 187 NRL tries and sits just behind Ken Irvine's all-time record of 212. I'm not sure if Billy intends to play next year, but if he does that record is not beyond him.

Billy was left out of Origin I last year and the Maroons missed him. He was brought straight back in and Queensland won the series. He went on to play a major role in the World Cup win with Australia and won a premiership with the Melbourne Storm and the Clive Churchill Medal. What a phenomenal season when you consider where he was at the previous two years.

The game has seen some extraordinary custodians. Clive Churchill and Graeme Langlands are Immortals and Darren Lockyer was a superstar at fullback, as he was at five-eighth. Lockyer played half his career at fullback and I loved the way he moved, and Slater is the same.

When Lockyer was there at the back you were confident that he would handle whatever kicks were put through and start your sets the best way possible. Billy is the same in that regard.

The game has changed a lot since Churchill and Langland's day. Fullbacks now are extra ball players and Slater comes into the line and sets up tries with a pass or a kick and we've seen him do it for years.

I think the fullback's role is tougher now that in the past because it is more a defensive game and teams are more adept at stopping the best attackers. For Billy to still have the line breaks and try assists that he does makes him a great player.

I have spoken to players who have come into the Queensland side and never played with him before and they talk about Billy's chat and how he just doesn't shut up. He is a master at the back in marshalling the defensive line of any team he plays in and that is such a valuable asset.

Who is the greatest fullback of all time?https://t.co/kHtJoRF3H8#NRL

When Billy first came on the scene in Origin in 2004 he scored one of the great tries at Suncorp Stadium. I was watching him and I thought 'look at this kid, chipping for himself in Origin'. I wouldn't have attempted that. Guys like Billy have no fear. He had a shot and pulled it off in the toughest arena.
He is still doing it 14 years later.

Billy doesn't seem to age. He's not showing any fear with the way he plays. He would know just one more bad fall on that shoulder and it can go again, but the way he's approaching his football he has obviously put that at the back of his mind and that's a great credit to him.

I still reckon the Melbourne Storm will win the premiership this year and Billy will continue to be front and centre of everything they do.

He still has Cameron Smith there to work his magic with but even without Copper Cronk on board his impact hasn't diminished.

We could be talking about Lockyer being the best ever fullback but he was just as good at five-eighth. Billy has played his whole career there. I just love the way he runs the ball, comes into the line and gets outside a player. He's just too quick. Hesitate for a second, and he's gone. 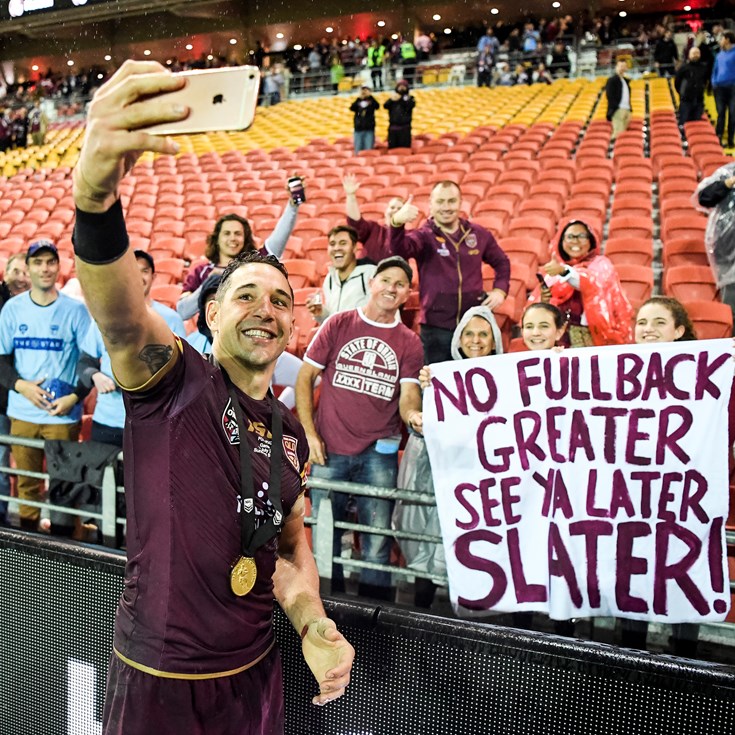