There can be no tougher NRL apprenticeship than weighing 89kg and perhaps the best Englishman to play club football here in four decades continually raring at you on the edge of the ruck.

Yet Gold Coast five-eighth Alexander (AJ) Brimson said on Tuesday he enjoyed being earmarked as a defensive target by 116kg Rabbitohs' giant Sam Burgess in his fourth NRL appearances for the Titans - because he knows that is the challenge he has to be able to face on a weekly basis.

Brimson not only stood up to the rampaging Burgess but, with the help of inside defenders, gained the English legends' respect by forcing a couple of errors from the Clive Churchill Medal winner.

It's an experience he will take into the clash with the Bulldogs at Belmore this Saturday as he confronts more experienced men coming down his alley, namely back-rower Josh Jackson.

"It was pretty cool in a way," Brimson said of his Burgess initiation.

"He is actually a nice guy; he helped me off the ground when he hit me down a couple of times. It was a challenge for me, he is one of the bigger guys in the NRL. It was tough but I enjoyed it."

The performance earned the endorsement of Titans skipper Ryan James, who says he has complete faith in the inexperienced teenager.

"He was good and he even forced a couple of errors out of him [Burgess] as well," James said.

"He just wrapped the ball up and trusted his inside defenders to come in and take the legs if he went up top.

"He forced two or three errors, plus there was inside pressure from Keegan Hipgrave as well. I think he did a pretty good job out there."

Brimson admits to still feeling like he is in dreamland, having faced up to the likes of the Burgess brothers, Felise Kaufusi and Cameron Munster in the first month of his NRL career.

But it doesn't show in his on-field attitude.

He is not afraid to take the line on and is averaging 82 running metres a game, nor is he reluctant standing his ground in defence, with a defensive efficiency rate of 88 per cent.

And he should have had two try assists added to his one try but was robbed by one when Keegan Hipgrave and Dale Copley got in front of each other with their enthusiasm to pounce on a neat grubber kick into the in-goal in the first half against Souths.

"Definitely," was Brimson's direct response when asked if he was still pinching himself to be playing NRL at age 19.

"I am still trying to cement my spot in the team ... and when you look up at Sam Burgess or even George Burgess?

"At the start of year or last year I watched every NRL game on TV. When they're out there, it's pretty cool."

And who had to buy him a beer for ruining his first half try-deserving kick?

"It was in Keegan's lane and Dale came over a bit, so yeah, it was one that was robbed from me .... but it's alright," he smiled. 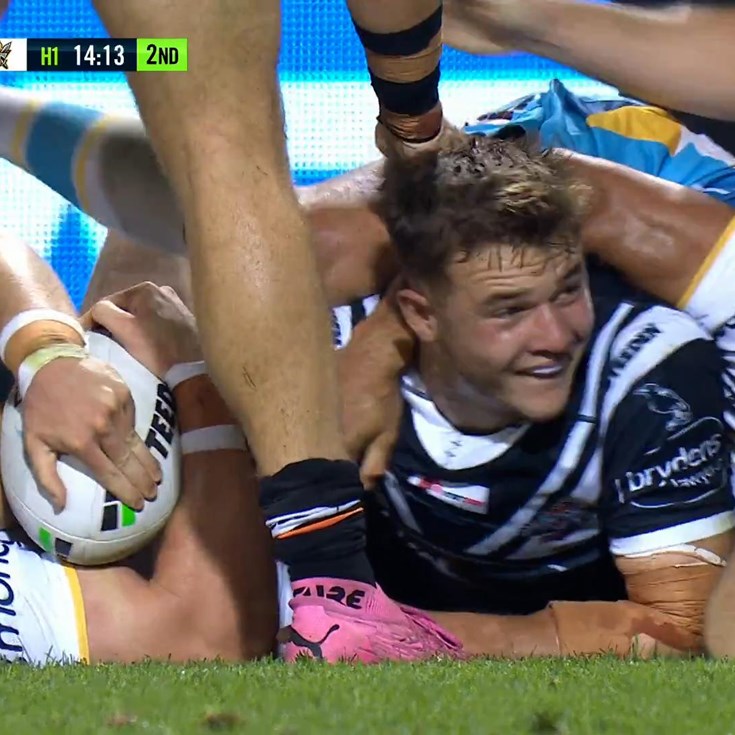 Titans sweat on Fifita after outgunning Tigers in tryfest