State of Origin coaches Kevin Walters and Brad Fittler may have some team reshuffling to do after a torrid 9-8 win by Melbourne over the Sydney Roosters in Adelaide, with Maroons prop Dylan Napa straining ligaments in his left knee and Blues winger Josh Addo-Carr hurting his ankle.

But put the Origin news to the side for a second as the final 20 minutes of the match – which was 2-2 at halftime – was played in a frenetic manner.

These two clubs were only separated by a point (25-24) last time they met at Adelaide Oval in 2017 – courtesy of a Mitchell Pearce field goal.

This time it was retired Queensland Origin captain Cameron Smith who potted a 40-metre field goal in the 80th minute to give Storm the win and a passage into the NRL top-four.

The game was bound to be decided by Smith or his best friend, and opposition half, Cooper Cronk as he faced his old club for the first time in 15 years. The build-up to this round 16 game had been all about Smith and Billy Slater playing against Cronk – a new emotion for all concerned despite more than a decade of elite football.

Cronk indeed tried to force the match into golden point with a field goal attempt from 25 metres out just 20 seconds after Smith. But Storm second rower Ryan Hoffman pulled off his second charge-down of the match to foil his former teammate.

While everyone caught their breath, Napa was already being treated in the sheds and booked in for scans for suspected medial ligament damage.

Napa came from the field in the 70th minute and couldn't continue, presenting problems for Walters who needs to name his team on Sunday. Addo-Carr stayed on but swapped sides with Suliasi Vunivalu and didn't look 100 per cent. Fittler names his NSW team on Monday and although the series is won 2-0, Addo-Carr has scored tries in both games so far.

It took 60 minutes in this cracker of a Friday night club game before someone's line was breached. And Storm did it in the final seconds of facing 12 men with Rooster second rower Victor Radley about to return from the sin bin.

It took the tallest man on the field to do it, when Melbourne prop Nelson Asofa-Solomona barged through Sio Siua Taukeiaho and Sitili Tupouniua to score under the posts at the river end of Adelaide Oval.

Then Asofa-Solomona turned villain from the restart when he fumbled the play-the-ball, handing possession over. Moments later he gave away a penalty right in front of the uprights. But the resulting penalty kick from Latrell Mitchell hit the post from right in front bouncing out.

Mitchell had kicked a conversion to Matt Ikuvalu's try just four minutes earlier from the sideline and in the pouring rain to level scores 8-8.

His penalty would have put the Tricolours in front.

But that typified the closeness of the contest.

A try-less first half, with scores level at 2-2 from Mitchell and Smith penalties, wasn't totally unexpected from the two best defensive teams in the competition.

But some fans would have been hoping for more points in the opening 40, considering all the firepower on the field in both backlines, with the likes of James Tedesco, Mitchell, Addo-Carr and Vunivalu.

Vunivalu was airborne in the 19th minute at the cathedral end of Adelaide Oval and planted the ball with his fingertips as per usual. But NRL Bunker replays showed the ball grazed the touchline in-goal so they overturned Grant Atkins' call of 'try'.

While winger acrobatics might have been in short supply, the defensive walls of both teams were solid – Storm's Christian Welch and Roosters' Zane Tetevano unleashed a few bell-ringers.

Roosters propTaukeiaho must have thought he was a back. He had run 101 metres by halftime – 168 by fulltime. And as a forward and goal kicker for Tonga, he was one of the seven Roosters backing up five days after the representative round. Storm had six.

Perhaps some fatigue with so many involved played a part in the low score in Adelaide.

News & Notes: Blake Ferguson has his right knee strapped twice early in the match but played 80 minutes.... Isaac Liu was penalised for a crusher tackle on Kenny Bromwich and could attract match review committee attention... Former Cowboy Patrick Kaufusi made his debut for Storm but didn't get to play with his older brother Felise because he's nursing a sore ankle after Origin II....Jake Friend had an HIA (34th minute) but returned to play...Crowd: 17,728 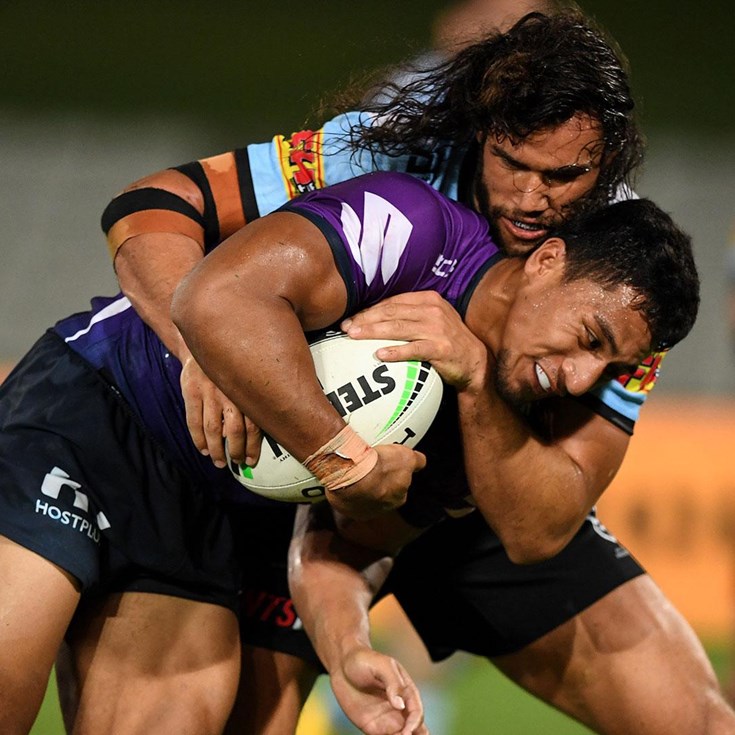