Star fullback Kalyn Ponga is out of the State of Origin series finale after suffering a lateral hamstring strain in the Knights' 36-16 loss to the Bulldogs.

Ponga limped from the field in the 15th minute and did not return. Newcastle coach Nathan Brown later confirmed Ponga would undergo scans on Sunday. The results were that he has suffered a grade-one tear which is expected to keep him on the sidelines for 3-4 weeks.

"To what extent it is, I don't know – whether it is one of those shorter ones or a longer one," Brown said after the game.

"I'd only be guessing, but any time someone comes off after 10 minutes there has to be some concern about whether they can turn themselves around quick."

Ponga was not the only injury concern for the Knights. Hooker Slade Griffin was taken to hospital with a serious knee injury after appearing to hyper-extend it while setting up Herman Ese'ese's try just before half-time.

In more bad news for the night, his season is over after it was confirmed he suffered multiple ruptures to ligaments in his knee. The horror diagnosis for Griffin was that he has a ruptured ACL graft, torn lateral ligaments and meniscus.

Griffin has had suffered ACL injuries three times previously in his career. He is expected to be out for 9-12 months.

Co-captain Aidan Guerra was clearly concerned about his teammate.

"You really feel for the bloke, he's had a tough injury and is an integral part of this side," Guerra said.

"You just hope that he is alright with himself. The side will get on and continue to fight and try to become the best team you can be but you just hope for the best for Slade."

Brown is hopeful that Mitchell Pearce and Daniel Saifiti could return for the round 18 game against Parramatta.

On the field it was just as tough for the Knights as the Bulldogs stormed home with four unanswered second half tries. Brown did find some positives, despite being favourites for just the second time in three years and letting a half-time lead slip.

"I thought we competed and our forwards worked really hard to force errors and get us back in the game, but it was more our decision-making in attack that cost us," Brown said.

"We gave ourselves some opportunities to score, and we probably didn't get our decision-making quite right and Canterbury held us out for a relatively lengthy period. 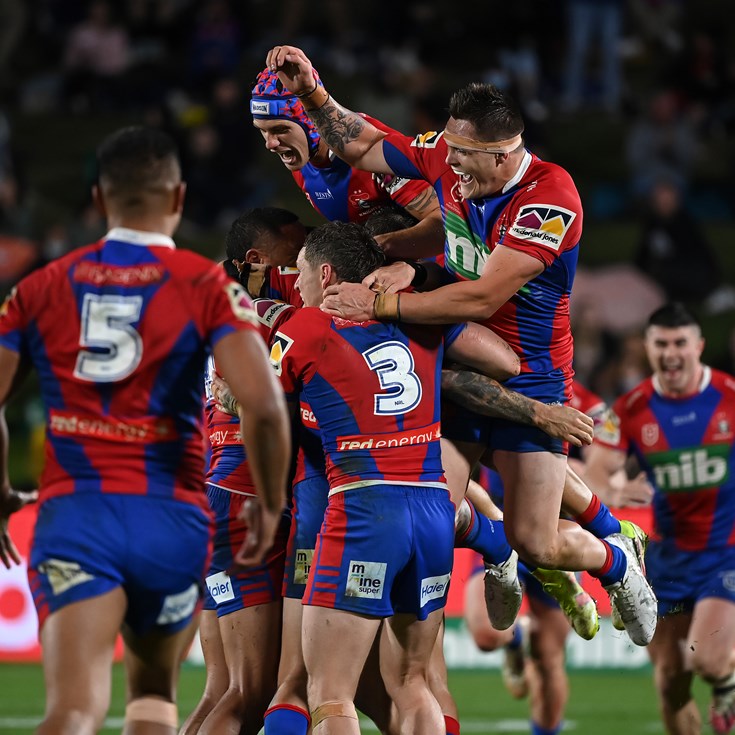 Ponga a rare one that got away from Roosters