If you think next week's State of Origin clash at Suncorp Stadium will lack aggression, intensity and desire because the series is over - think again.

There have been 14 occasions when Queensland or NSW have been in a position to drive the nail in the coffin 3-0 since 1982.

It's been achieved seven times – four times by Queensland and three by NSW.

Any talk of next week's Brisbane Origin being a 'dead"' rubber really does not understand the pride and passion that drives these warriors when they pull on their state's colours.

This clash will be no different to the previous 14, with both states equally motivated and determined to win, but for different reasons.

For Brad Fittler's crop of exciting young players, who secured just the Blues' second interstate series win in the past 12 years with an 18-14 victory in front of a delirious ANZ Stadium, the challenge will be to claim the Blues' first 3-0 shutout in almost 20 years.

They have a golden opportunity to inflict the first 'blue rinse' on Queensland since 2000 when they won Game III 56-16 at what is now ANZ Stadium.

Queensland, on the other hand, will want to salvage a win from a series in which they have been highly competitive in the first two games in a transitional period for them.

They have already farewelled champion players Cameron Smith, Johnathan Thurston and Cooper Cronk who were instrumental through their recent decade of dominance.

They will want to win desperately for their long-serving fullback Billy Slater to send him out with a victory in his 31st game for Queensland.

Queensland fans in their thousands will do their best to make sure that happens and Slater will fire up the faithful as he leads the Maroons out as captain in his game for the state.

A record home crowd drove NSW to victory at ANZ Stadium and Queensland fans will be fuelled with fire to return to favour.

Former Canberra, Queensland and Australian fullback Belcher, who experienced both sides of the coin in his 16 Origin games, feels the fear of being towelled up 3-0 in a series is a bigger motivator than if you have already won the series and are attempting a 3-0 whitewash.

"All I remember was the embarrassment you felt if you got your butt kicked 3-0," Belcher told QRL Media.

"Even though there was nothing between the sides (in 1986) it still showed you got beaten 3-0."

"You never lack motivation when you are 2-0 down but when you are up 2-0 and the going gets tough and you've already won the series, where do you find that bit extra?

"That's what Freddy's Blues may face, how to find that extra edge when they know they don't have to win, they know they have the series already wrapped up.

"There will be no lack of motivation for the Maroons, given all the players they have lost."

It's a massive ask for the Maroons to overcome the loss of so many great players but they have shown in the past – remember 1995 – that nothing is impossible.

History also says it won't be easy for the Blues who, after making 11 changes for this year's series, have been better in both games – but only just.

Let's look at the 3-0 series records and break them down a little.

Incredibly, 11 of those games have been played in Brisbane and just three in NSW.

Of the 11 played in Brisbane, the Maroons have come out on top seven times.

NSW are 2-1 in the three games played in Sydney.

They were successful however at Lang Park in 1986 and 1996 and in their last clean sweep of the Maroons at Suncorp in the Olympic year of 2000.

Both teams have had seven chances to inflict 3-0 victories on their rivals with Queensland leading the head-to-head card 4-3.

So now we come to the 15th time, with NSW on the precipice of a 3-0 series shutout.

NSW have a side that is young and very exciting, a side that finally has enough points in them to put Queensland away, and a coach who encourages them to attack Queensland not go out and try and defend their way to victory.

Queensland, well they just have that incredible Maroon spirit and passion that always seems to make then very hard to beat, especially when their backs are against the wall. 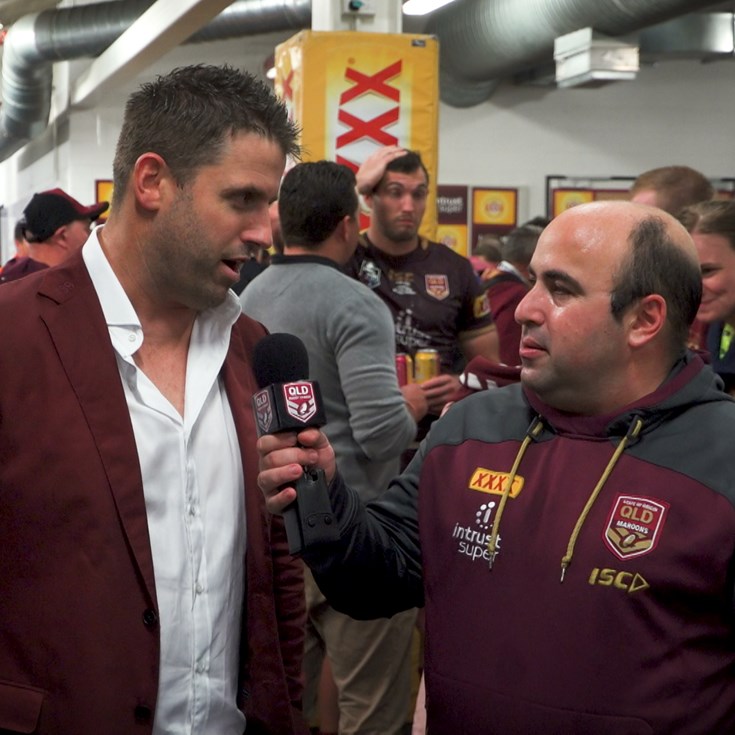 Back to the grind: Origin training