Size and strength are vital assets for the modern-day rugby league player.

So it's hard to imagine a player weighing just seventy-six kilograms and standing at 168cm succeeding. Clive Churchill not only did that - he became one of the giants of the game.

The legendary journalist saw him play on a number of occasions, the first when he led Australia to victory over England on the SCG mud in 1950. He shared his own insights, as well as the opinions of several legendary figures who marvelled at Churchill's talents on the field and were friendly with him off the field.

Heads got acquainted with Churchill in 1967 when he came back to coach Souths and says off the field he was as friendly, sharp and funny, just as he was fierce and spirited and combative on it.

Heads he still stands by this observation he wrote many years ago: "He was a football revolutionary in a small package. He weighed only around 11 stone 7lbs (76 kgs). But throughout his turbulent and exciting career the size of 'the fight in the dog' was extraordinary. A speciality was cutting down big men on the charge; his punishing and fearless low tackling stopped them all."

Growing up in the city of Newcastle, Clive had the flair, passion and skill for the game, playing his first representative match for the Newcastle region at just twelve years of age.

He made his senior debut for Central Newcastle in 1946, playing two seasons. During that time, he played for Country Seconds and his dazzling performance caught the eye of the South Sydney Rabbitohs.

From there Churchill's career took off at a great rate.

Upon getting a contract at the Rabbitohs for the remainder of the 1947 season, he was picked in the Australian team the following year.

That included a match against the touring New Zealand side in June, before heading to the UK and Europe for Tests against Great Britain and France.

Keith Barnes from Balmain told Heads that he definitely lived up to his tag of "Little Master".

"He was a great player, very evasive, a brilliant running player with the ball," Barnes said.

"There wasn't much of him but he was a very, very determined defender. He had great hands and was a daredevil on the field; he used to take a lot of risks."

In total, Churchill wore the green and gold an incredible 91 times for Australia, including 34 Tests and three World Cup games. For six of those years he was the national captain.

Legendary broadcaster Frank Hyde recalled that he was unique, representing a package of all the qualities that go towards making up a great footballer.

Former Eastern Suburbs and Australian forward Ferris Ashton told Heads that many people did not realise what a fantastic fullback that man was.

"When you saw the size of him in the dressing room, you'd think: 'goodness me' how can this bloke tackle so ferociously," Ashton said.

"With the ball Churchill had a magnificent fend and there were plenty of big front-row forwards who experienced that when they tried to tackle him.

"It would just be 'ping' and Clive would be off and running. He was incredible."

He was not the only one paying Churchill the ultimate honour, with Eastern Suburbs front-rower Ray Stehr adding: "I have seen all the great fullbacks but I regard Churchill as the star who shines above them all".

At club level, his achievements were just as impressive, helping the Rabbitohs to premierships in 1950, 1951 and 1954, before his career came to an end in 1958, when he left the role to move to Queensland for his final playing season as captain-coach of Brisbane Norths.

Given his size and sublime talent, Les 'Chicka' Cowie, who was Churchill's South Sydney teammate in the golden years for the red and green, believes he was the greatest player he ever played with.

WG 'Bill Buckley' a Chairman of the NSW and Australian Rugby Leagues recalled that: "I have never seen a greater player or a more courageous man in any sport".

Despite being born and bred in NSW, and making 37 appearances, he did the unlikely (and unforgivable, these days) switching allegiances to coach Queensland to an unlikely series win in 1959.

But the "Little Master's" wizardry in the game did not end there.

He moved into a full-time coaching role with South Sydney, reaching the grand final five years in a row between 1967-71 and capturing four premierships. He also coached Queensland and Australia.

Clive died in 1985 at just 58 years of age from cancer. But his legacy is still strong in the game and Australian sport.

Churchill was named as an original rugby league Immortal in 1981, the grand final man of the match award is named after him, while a stand at the Sydney Cricket Ground is also named in his honour. 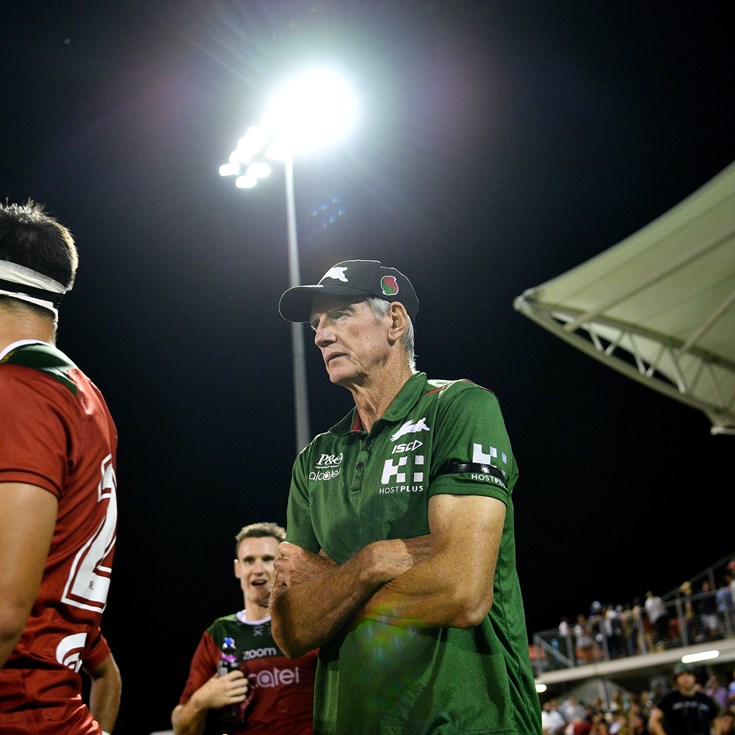 Welcome to the NRL, Reece Hoffman

Gagai secures his hat-trick in win over Tigers