Cooper Cronk will test his injured shoulder by tackling Dylan Napa or other members of the Sydney Roosters forward pack but the star halfback has backed himself to play in Sunday night's grand final against Melbourne at ANZ Stadium.

Cronk was free of the sling he was wearing earlier in the week and his range of movement had improved significantly as he fronted a grand final press conference on Thursday with members of the Roosters and Storm camps.

Storm coach Craig Bellamy and captain Cameron Smith said their first-hand knowledge of the 34-year-old's ability to recover from injury had convinced them he was likely to play.

However, Cronk admitted he needed further improvement before being cleared to play and would not take the field against his former Melbourne team-mates unless he was capable of tackling the giant Storm forwards who will target him in defence.

"I've had a couple of improvements today and I definitely needed some," he said. "I think most people in this room know I'm pretty diligent and pretty professional in what I do but I have gone up 1000 knots this week.

"It is just about whether I can manage it, can I deal with the pain and can I get enough range and movement and strength to get through a game of football.

"To be able to do some of the things to get stability, movement and range, it's okay. It's improvement. But it's not enough to tackle Jesse Bromwich or Dale Finucane so I have got a fair bit of work to do."

Asked if he would tackle Napa before determining whether he was fit enough to play, Cronk said: "Yes, it is going to happen on Sunday so I will have to do something like that. Maybe I can pick a smaller bloke like [Luke] Keary but it is going to get to a point where I have to test it.

He added: "I will tell you right now, the only reason I won't play on Sunday is because I am physically incapable of doing it".

While Robinson said the final decision would be made by himself, Cronk and the doctor, the former Test halfback wants to also consult Roosters co-captains Boyd Cordner and Jake Friend.

"I could make the decision myself with the help of Robbo and the medical staff but I would like the guys next to me to help me make that decision. I will do the right thing by the team," he said.

Matterson on where he'll fit in on Sunday

Cronk has been working around the clock on rehabilitation and he said his mindset had always been that he would play in his eighth grand final – and the first for the Roosters.

Robinson said emotion would not play a role in the decision but also backed Cronk to play.

"It's a gut feeling with any player and then the gut feeling about Cooper," he said. "I haven't seen Cooper with an injury but I've heard about the stories before, leading into Origin games and stuff."

Smith recounted how Cronk had made a faster than expected recovery from a broken arm during the 2014 season, while Bellamy said he had never known a player as diligent about his rehabilitation.

For that reason, the Storm are expecting Cronk to play and have built their game plan around him being the Roosters playmaker.

"I've been lucky enough to play alongside Cooper for a long time in my career and there is probably not a player who comes to mind that matches his ability to get up from injury concerns or some major injuries that he has had to deal with," Smith said. "He does everything he possibly can to get himself right.

"I guess the one that comes to mind is when he actually missed a couple of games with a fractured arm from Origin. He missed three or four weeks with what is usually a six-to-eight-week injury.

"From my experience, seeing what he does with his preparation and the type of player that he is, I am not going to be shocked to see him out there. I am expecting him to play." 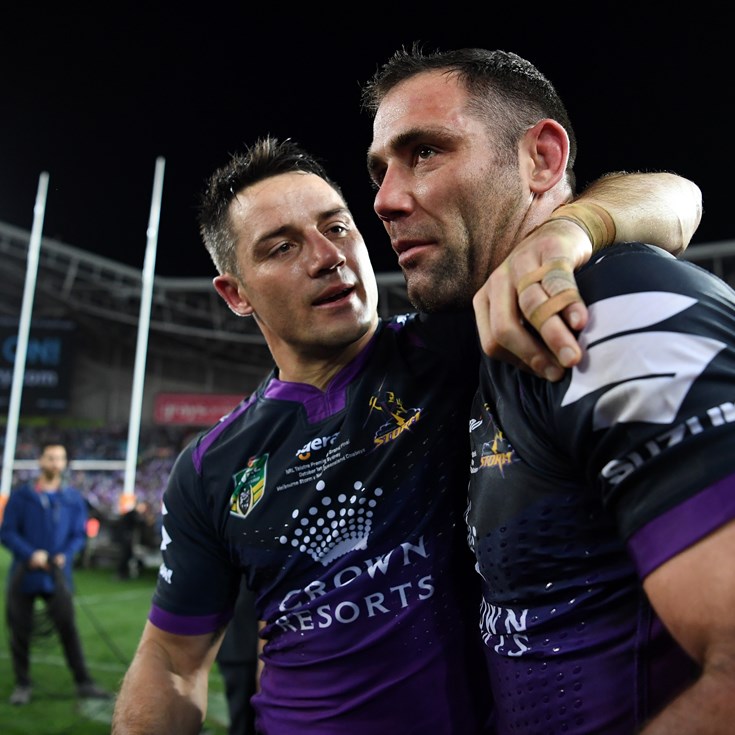 'There's no player I respect more': Cronk buries talk of rift with Smith