It's the dawn of a new era for both nations when Saturday's one-off Test between New Zealand and Australia kicks off at Mt Smart Stadium.

The home side begin the Michael Maguire era with a couple of certain starters unavailable in key men Isaac Luke and Roger Tuivasa-Sheck, while it is also the first Test since Simon Mannering, Russell Packer and Ben Matulino announced their Test retirements.

The change for the Aussies is arguably more seismic; last time they played – the 2017 World Cup Final – Billy Slater, Cooper Cronk and captain Cameron Smith all featured while Johnathan Thurston was out injured but yet to retire from rep footy.

Now the team's four most important players of the past decade or so have left at basically the same time.

In come in-form debutants like James Tedesco, Damien Cook and Luke Keary. The latter, a 2018 grand final-winner, was a late call-up following the withdrawal of senior five-eighth Cameron Munster. Injured Cowboy Michael Morgan is another absentee from the team's previous campaign while the Test retirements of Darius Boyd and Sam Thaiday also leaves to a huge gulf in experience. Will Chambers, Josh Dugan, Blake Ferguson, Trent Merrin, Matt Gillett and Andrew Fifita were in green and gold last time out as well; at best five of the 17 that won the World Cup will play on Saturday.

Manly captain Daly Cherry-Evans is the other beneficiary of the swathe of missing playmakers, heading a number of players to have earned Test recalls, while future Test star Latrell Mitchell gets a debut.

Key match up: David Klemmer v Marty Taupau. For the first time in a long while, Australia will be feeling their way into a new playmaking combination. It seems like the Kiwis have to do it every year and this year is no different. It does square the ledger a little, not having to come up against the same spine that propelled Queensland and Australia to so many wins over the past decade or so, but what it means in the short term is that if New Zealand can establish some dominance in the middle they may get to play with the advantage. Big angry middle men David Klemmer and Marty Taupau are crucial in that battle and automatic selections for their sides and the early charges for each will set the tone of the contest. Klemmer (181 metres per game) and Taupau (157 metres) were the two best metre-getting props in the 2018 Telstra Premiership.

For the Kiwis to win: Shaun Johnson has to step up and run this team. With Warriors mates Tuivasa-Sheck and Luke out, the second half slot and hooker role will have to be managed by a combination of Kodi Nikorima, Brandon Smith, Jahrome Hughes and Peta Hiku. Of those only Nikorima is a regular playmaker at NRL level and the Kiwis will live or die depending on which version of Johnson shows up in this game.

For the Kangaroos to win: They just have to click. With so many regulars and incumbents now gone, this team has been picked on form. Tedesco and Cook were the two best players through the Origin series and gelled quickly. Keary may be a late call-up but has a wonderful club combination with Tedesco. Cherry-Evans has yet to play with any of the other playmakers but showed in Origin III he can come into camp and get the job done in a new team. With powerful and dangerous runners in the forwards and backs the Kangaroos will create chances – it will be up to the new spine to make sure those count.

Kiwis Stat Attack: In terms of offloads, after league leader Andrew Fifita (82) the best two offloaders of 2018 are in this NZ squad with Taupau (71, second) and Esan Marsters (49, third) generating plenty of second-phase play. The best two from the Kangaroos squad were Ben Hunt and Aaron Woods (both 36) though neither of those are likely to be in the starting 13 or even guaranteed to make the 17.

Kangaroos Stat Attack: Players from this squad finished first and fourth on the NRL tackle break count this year with Tedesco (158) and Mitchell (118) beating players at will. The best Kiwi-eligible player was Tuivasa-Sheck; the best two from this squad are Taupau (107, ninth) and Jordan Rapana (91, 16th).

And another thing: The Kangaroos team is now dominated by New South Welshman – a very different scenario to that seen over most of the last decade and a half. It follows on from the Blues' successful 2018 Origin campaign. Nine of 17 names were Queenslanders this time last year but on Saturday the likely line-up will feature 11 or 12 Blues. 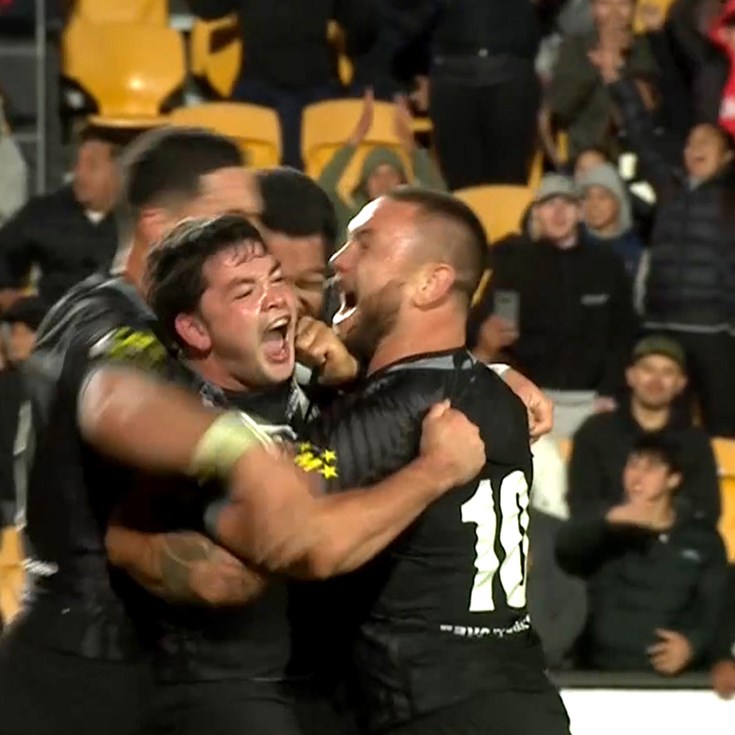