Just four months ago St George Illawarra winger Jordan Pereira was resigned to needing to find an alternative career; now he is the No.1 specialist winger at the Dragons as they step up preparations for next season.

Pereira, 25, made his NRL debut in the round-19 clash with North Queensland on July 21 after an injury to Papua New Guinea international Nene Macdonald but until then he feared his dream of playing in the Telstra Premiership would never come to fruition.

After joining St George Illawarra midway through the 2017 season, Pereira's ambition during the last pre-season was to play in an NRL trial but that opportunity didn't arise and despite being the leading try scorer in the Intrust Super Premiership there was no interest from rival clubs.

However, he got his chance when Macdonald was ruled out of the Cowboys clash and did not miss another NRL match for the Dragons.

"I thought I was going to have to dust off the old steel cap boots midway thought last season because my manager was saying 'I am not too sure what is going on next year' as there wasn't any offers from any other clubs," Pereira said.

"That was before I played first grade and I was really worried about what I was going to do next year. I thought I was going to have to go back to work and then after a few injuries I got a chance and I signed straight away.

"The opportunity came and I am just really grateful that I got that because now I am here today and I get the chance to get more of that and get more experience."

With Macdonald having been released to the Cowboys and New Zealand Test winger Jason Nightingale retiring at the end of the season, Pereira is now the most experienced winger at St George Illawarra and he recently re-signed for a further two years.

However, he isn't taking anything for granted and is ready to compete for a wing berth with new recruits, Jonus Pearson from Brisbane and Fijian Mikaele Ravalawa, who was Canberra's under 20s player of the year in 2017.

Dragons coach Paul McGregor will also want to find a place in the backline for boom rookie Zac Lomax, who represented the Prime Ministers XIII in Papua New Guinea and the Junior Kangaroos against the Junior Kiwis after impressing in the finals matches against Brisbane and South Sydney.

"There are some good replacements that the recruitment officers have gathered up," Pereira said. "I was out injured when our reserve grade played against Mikaele but I watched the game and he is a freak athlete.

"Me and Jonus Pearson played against each other heaps in the Queensland Cup, we always marked each other and he is a handful."

Former Broncos forward Korbin Sims is St George Illawarra's main signing and he is viewed as a ready-made replacement for Leeson Ah Mau, who has returned to New Zealand to play for the Warriors.

However, second-rower Jacob Host is determined to win a regular spot in the top squad after limited chances last season.

Host is recovering from post-season surgery after dislocating his shoulder in the round-17 loss to Melbourne and returning in round 24 against Canterbury.

The 22-year-old is expected to resume full training after the Christmas break.

"I was starting to get a bit of momentum with form and minutes so it was frustrating to get that injury but I was proud of myself for working my way back into the team before the end of the season," Host said.

"At the end of the year I sat down with Mary and we set some goals for this coming season. That's one of the main ones; to be playing consistent footy and to be consistently playing first grade. I want to establish myself and make that step up."

NSW Origin prop Paul Vaughan also expects to be able to resume running after breaking his foot in a late season training incident as he was preparing for a comeback from a syndesmosis injury suffered in the round-21 match against the Warriors. 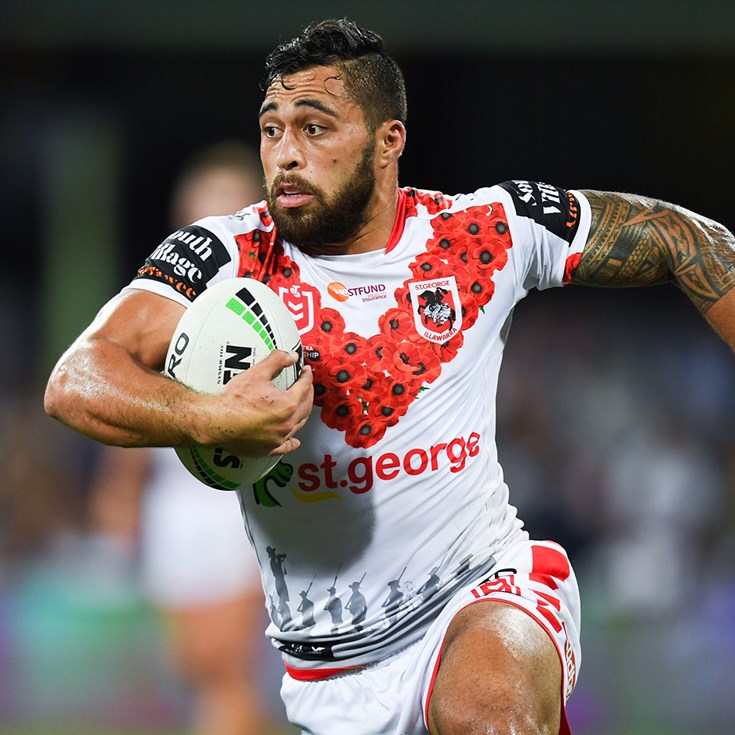 Dragons v Rabbitohs: Lawrie in for Frizell, Turner on bench