Matt Lodge insists he and Tevita Pangai jnr are ready to take the Broncos forward pack "by the reins" and are determined to leave a lasting legacy of their own at the club.

The 23-year-old prop will likely line up alongside Joe Ofahengaue and Pangai as the three starting middle forwards for Brisbane in 2019.

Lodge has played less NRL games in total than that duo but has started in more matches, with 24 to his credit.

Pangai has played 36 of his NRL games off the bench but became a regular starter in 2018. The Tongan international has been working hard on his fitness so that he can play the big minutes required as a starting middle forward and Lodge said he had no doubt he would meet the challenge.

"He is definitely up to it. We've got a lot of good young middles coming through and Tevita is one of the best of them," Lodge said.

"He's played in the middle before. He's played a few years there. He wants to play there and he is ready to take the minutes on and do the best job he can.

"We are looking forward to taking the forward pack by the reins and doing our job … and there are a few other boys who are embracing it as well."

Lodge ready for the games to begin

And embrace it they will need to after more than 600 games of middle forward experience exited the club with the departures of Sam Thaiday, Josh McGuire and Korbin Sims.

"They were awesome and we've learned a lot off them, but the club here has shown a lot of faith in our younger players and personally I wouldn't trade any of the young ones at the moment for any of the other experienced players in the comp," Lodge said.

"We've got Payne [Haas], Patty Carrigan, Tom Flegler and heaps coming through and I am confident they are not just going to do a job, but do it well.

"I encourage them. If they play better they get the starting jersey. Whoever is playing the best footy is who we want out there. I think the coach is about that. If the young guys are doing well no doubt the team will be going well."

Lodge attended the Emerging NSW Blues camp in December and said working towards an Origin jumper remained a goal.

When asked about forging an Origin legacy alongside fellow NSW hopeful Pangai, Lodge was quick to reply that making a mark at the Broncos was his initial goal.

"I think we are focussed on building a legacy here at the moment," Lodge said.

"We haven't got the results we wanted. Once we do you can't argue with stuff like that. If we are winning here and doing well then that might be our next aim then."

I wouldn't trade any of the young [Broncos forwards] at the moment for any of the other experienced players in the comp.

The intense Broncos training under new coach Anthony Seibold has been tough on the big men, but Lodge said there was only one way to get through it.

"You've got to embrace it otherwise you probably won't survive it," he grinned.

"Everybody has bought into his training philosophy well. It probably will take a bit of time to get everything together and all the new systems in. I don't think we are all expecting to be perfect straight away but we've been working hard.

"I've got a lot of things to work on as well… so I am just worried about trying to give my best performance as an example for other players." 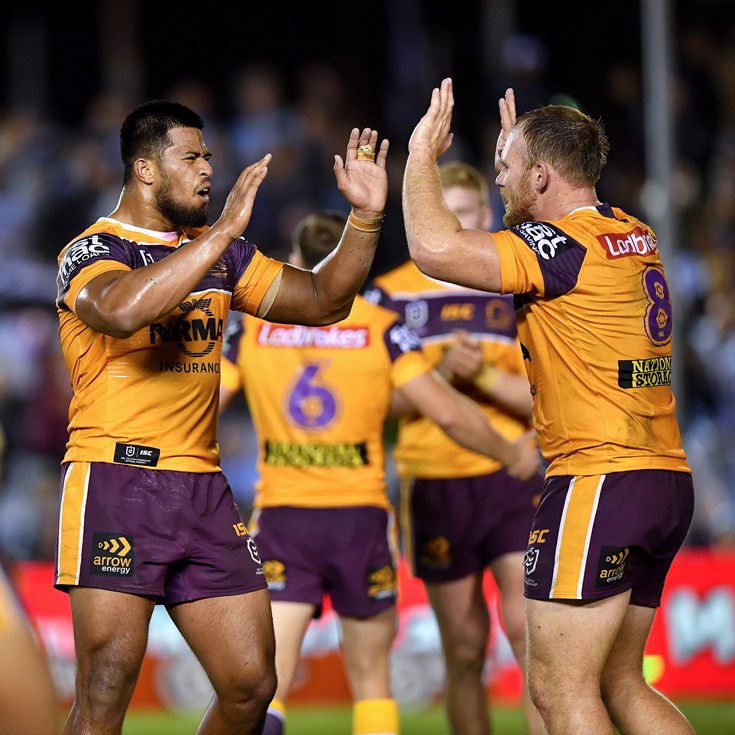 Broncos out to muzzle Murray with Haas-Lodge combo