The Devils made the most of a Bishop Park pickpocket to start their Intrust Super Cup season on a high note with victory over highly-rated Burleigh Bears today.

The game was on a knife’s edge after Burleigh scored twice in three minutes, edging within four points of the Devils with four minutes remaining.

From the restart, Burleigh’s Luke Page charged into the Norths defence, but Devils centre Luke Pollock stole the ball from the prop.

A few plays later, winger Herbie Farnworth kicked a penalty goal that became the final act in a 28-22 Norths win.

The game included a few flashes of individual brilliance, but they were underpinned by the playing style that coach Rohan Smith has developed into his second season at the club.

That style was best shown in the 35th minute when emerging prop Ethan Bullemor picked a stray Burleigh pass from his bootlaces on the Devils line, charging 40 metres downfield.

The ball then spread to the right touchline and then back to the left where PNG international Nixon Putt scored his first try.

Putt was one of four Devils on debut today, showing a strong Bishop Park crowd that there is potential among their players to again test every team.

The Bears have had trouble with Norths in recent times. They lost twice to the Devils last season on their way to the minor premiership, but they clawed back from a 26-6 deficit today following Farnworth’s second try.

The Devils face a second tough test next weekend when the Easts Tigers, likely to include several Melbourne Storm squad members, make their way to Bishop Park.

“That was a pleasing way to start because we continued to play our game even when we got to a lead,” Devils coach Rohan Smith said.

“Today was a step towards becoming a team with the inclusion of some new players and some young Broncos players.

“Burleigh are a strong team and will have another good season.”

The Devils were unlucky not to open the scoring in the 13th minute when Farnworth crossed in the left corner, plucking a kick from his fellow Broncos squad member Troy Dargan.

The referee ruled that Farnworth had obstructed his Burleigh opponent in a close call.

There were no problems four minutes later when Farnworth gathered in a kick from Devils hooker Michael Sio.

The team try in the 35th minute was followed by another enterprising play as the halftime siren sounded. Zach Strasser’s kick found the outstretched finger of Bullemor, who scored his first Intrust Super Cup try.

The 16-6 halftime margin increased six minutes into the second half when winger Paul Ulberg scored his first try of the season.

Another draw in our first Colts under 20s match for 2019 against Burleigh Bears.

Earlier in the day, both the Hastings Deering Colts and Mal Meninga Cup matches finished in draws, with both games levelled by Burleigh penalty goals in the final two minutes.

The Colts, playing their first match since their premiership win, drew 24-24 after the Under 18s finished 38-38.

The Devils observed a moment’s silence before the game in memory of former player John Payne, who passed away recently.

(File Image: Herbie Farnworth in action for the Devils in 2018.) 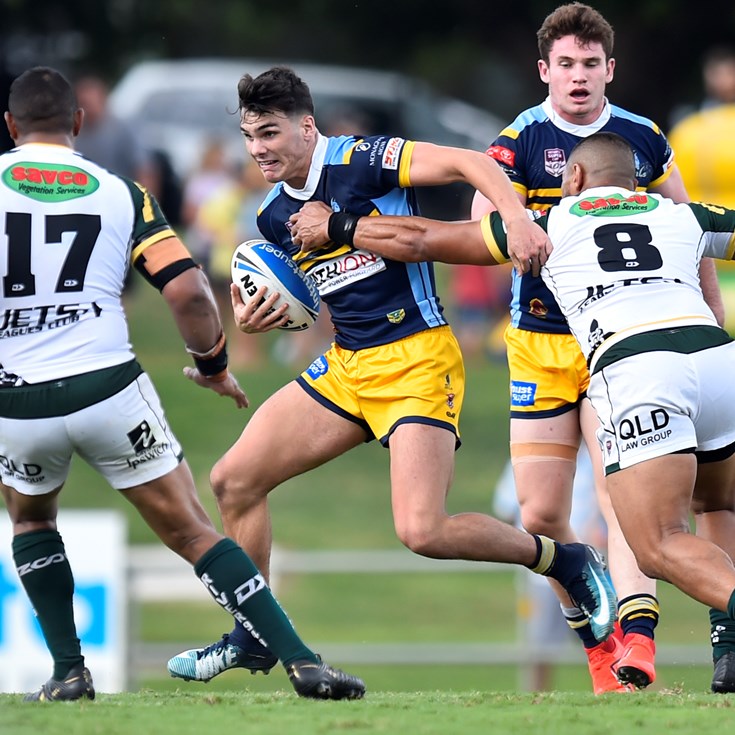 Ali Brown: Club is built on friendship and passion