The Jets and Townsville Blackhawks ripped in to their Round 1 game, despite the oppressive heat at the North Ipswich Reserve today, with the visitors displaying a slick touch that eluded Ipswich all game.

It was a tough day overall for both sides who were also celebrating Defence Force Appreciation Day, and early on defence was the name of the game with it taking 28 minutes for the the Blackhawks to score.

It came via Townsville lock Tom Gilbert who was on the end of a pass that sent him over for his first try in the Intrust Super Cup in his first game, and the Blackhawks were up 6-0.

Kalifa Faifai Loa was next to add to the scoreboard, continuing his try-scoring form that saw him cross for 16 tries in 2018 for the Blackhawks.

The Jets committed an error coming off their own line and the Blackhawks counter attacked by finding their big winger.

His try in the 32nd minute saw Townsville to a 10-0 lead at halftime.

Typical of a Round 1 clash, both teams were guilty of a clunky attack throughout the first half, producing a strappy game.

The Blackhawks had been made to make 16 more tackles than the Jets and the home side would have been hoping that the extra work would tell as the game went longer.

At halftime, Jets coaches Ben and Shane Walker called for a patient approach and not to force the issue.

The Jets started the second half well when hooker Kierran Moseley went to dummy half six minutes into the half – looking both ways to confuse the defenders, but knowing full well that he was going himself. He got the ball down to have the Jets moving forward.

However, that was all that was to be for the home side as more errors put them on the back foot with the Blackhawks good enough to capitalise each time.

Hastings Deering Man of the Match Shaun Hudson scored the first of his two tries that would break the Jets directly off the back of one such error in the 54th minute.

Three minutes later, he was there again after a Michael Purcell error when he was attempting to ground the ball. Instead, it was Hudson who was able to roll the ball over the line with control to score and put the Blackhawks out to a 22-4 lead with 20 minutes to go.

Marmin Barba took advantage of a penalty and added two points to the Jets to be down 22-6 to stop the flow of points against them.

But – on a day when all pale red heads should have been inside – Blackhawks hooker Krys Freeman showed his strength when he went to the left hand side and slammed the ball down after brushed aside some Jets defenders.

The lead was now 28-6 with 15 minutes to go – but Faifai Loa made sure he claimed his second try for the game just before the final siren and the Blackhawks had done a job on the Jets away from home in tough conditions winning 34-6.

It was a successful first start for new Townsville coach Aaron Payne who told Channel Nine reporter Adam Jackson that he was pleased with the efforts from his side.

Next week, the Jets will travel south to Burleigh, while the Blackhawks will play the Tweed Heads Seagulls at Piggabeen in the TV game. 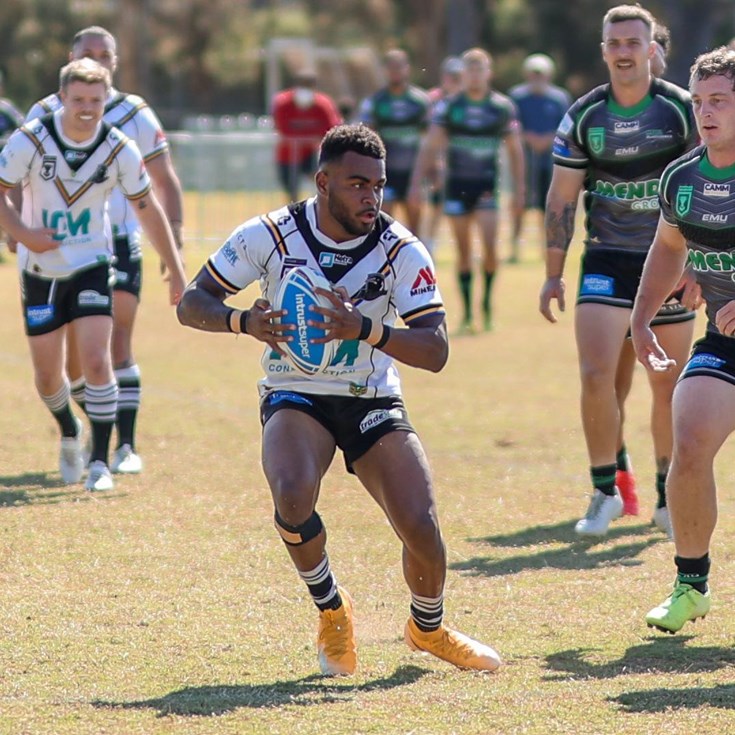