The BMD Wynnum Manly Seagulls led from start to finish in a comprehensive win over the Central Queensland Capras 36-12 on rainy night at Browne Park.

The Capras were on a high coming off an impressive last start win over the Magpies, but it was the Seagulls who struck first in the 14th minute when Delouise Hoeter crossed out wide.

The Seagulls looked slick in attack early, aided by the returns of Broncos-contracted players Patrick Carrigan and Richie Kennar.

Captain Mitchell Cronin took advantage of a quick play the ball and scored his first try of the year to put the Seagulls up 10-0 after 20 minutes.

The Seagulls had all the momentum and it was Sam Scarlett continuing on with his superb form laying on a try for halves partner Jayden Berrell to score under the posts and the Seagulls had 16-point lead.

The Capras finally started to get some possession and when they decided to run it on the last with some slick passing, it was Chalice Atoi the beneficiary scoring their first try of the match.

BJ Aufaga-Toomaga made no mistake with the conversion and ensured the Capras went into the break down 16 points to 6.

The second half started with the Capras in full control, marching up the field and after a couple of back-to-back sets attacking the Seagulls line, Jamie Hill got the Capras within four points when he crossed for a try virtually untouched after substitute player George Grant provided a sublime ball from dummy half.

Off the back of a penalty, the Seagulls were back on the attack and Scarlett floated out wide then provided a pin point grubber for Edene Gebbie to score his first try in a Seagulls jersey.

Before you knew it, Scarlett had his third try assist of the night, this time a kick to the corner for Hoeter to score his double.

Scarlett had the ball on a string and could do no wrong. Coach Adam Brideson was sure to have been impressed with the form of his star off-season recruit in his first two games for the club.

When Luke George scored in the corner for the Capras with 16 minutes remaining, the fans at Browne Park had some hope.

However, it was short lived as Ed Burns grabbed the opportunity that came his way through some hot potato passing, making no mistake to score his first of the night in the corner.

Alex Barr pounced on a Capras error just out from their own line to ensure the Seagulls left Browne Park with an key win.

The Seagulls' Matiu Love-Henry "led from the front with a dominant defensive performance" to be named Man of the Match.

MAN OF THE MATCH | ROUND 2 Matiu Love-Henry led from the front with a dominant defensive performance to be named MOM. Looking to build? Save time and money. Call 1800 1 BUILD today. www.builderbrokers.com.au

The fans in the bayside will be licking their lips after this performance from the Seagulls and will hope to see more next Sunday when they host their first home game at BMD Kougari Oval against last year’s premiers the Redcliffe Dolphins for the XXXX Rivalry Round.

The Capras will travel to BB Print Stadium next Saturday to face rivals the Mackay Cutters. 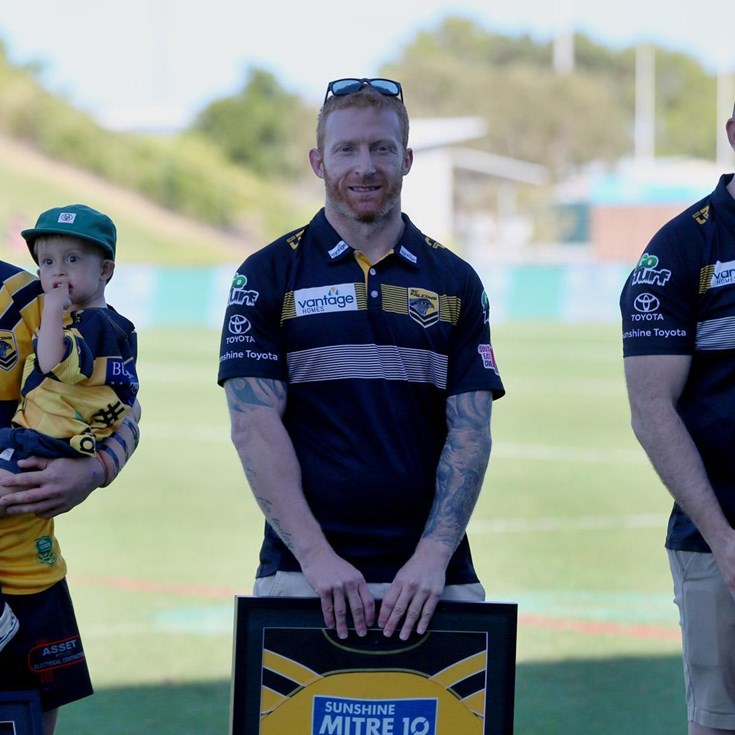 Falcons sneak into finals after snatching game from Capras