The Sharks had their worst defensive game for 2019 last round - letting in 24 points from the Eels - but now face the side with the best attacking record so far in the Sydney Roosters.

Injuries are starting to infiltrate Cronulla's ranks, which is never a good sign. Two key members of the spine in fullback Matt Moylan and five-eighth Shaun Johnson were missing against Parramatta, and then the side lost Aaron Woods (foot), who will now have an extended stint on the sidelines.

Perhaps they need to take a feather from the Roosters nest. They had winger Brett Morris, hooker Jake Friend and prop Jared Waerea-Hargreaves missing for the Broncos and still pummelled them 36-4.

And does any side have an answer for containing James Tedesco at fullback or interchanging half Luke Keary, who has shown he's as adept at No.7 as he is at his regular No.6 role?

Perhaps the rabid Cronulla crowd might be a good 18th man for the Sharks to employ on Saturday as the Roosters seem to have perfected the art of player diversity and versatility.

Sharks: Five-eighth Shaun Johnson (quad) is back but skipper Paul Gallen (ribs) is a late withdrawal with Jack Williams moving into the starting side in No.16. Braden Hamlin-Uele is promoted to the bench. Kyle Flanagan, who came in for Johnson last week, is out of the side. Jayson Bukuya reverts to the bench after starting last week for Gallen. William Kennedy and Aaron Gray were the two players omitted 24 hours before kick-off.

Roosters: Jared Waerea-Hargreaves will miss another week after being withdrawn from the squad 24 hours out from kick-off. Zane Tetevano (No.15) moves into the starting side. Waerea-Hargreaves and Lachlan Lam were the two players to drop out 24 hours before game time and Sam Verrills and Sitili Topouniua were omitted an hour before kick-off.

The Brailey brothers, Jayden and Blayke, and whoever plays hooker for the Roosters. Jake Friend (shoulder) is no certainty to return and Victor Radley will need his wits about him again to keep feeding his middle with a very mobile pack of Sharks back rowers on his tail in Briton Nikora, Kurt Capewell, Scott Sorensen and Jack Williams. They made nine tackle breaks between them against the Eels.

They need to quieten the Roosters halves as they are the major voices in attack. So Andrew Fifita and Matt Prior need to play the games of their lives, especially their trademark quick play-the-balls so the Roosters rhythm is thrown off-kilter and regularly.

Hand the ball to Keary and Cooper Cronk as often as possible. They organise the sets so quickly and so well that oppositions almost need eyes in the sides of their heads to work out where the next danger is coming from. And then there's James Tedesco, who has led the competition for the past two weeks in line breaks.

In 40 minutes last week the Roosters showed us that they are the benchmark. The key here is their play-the-ball speed. For Cronulla there are injuries, they are lacking middle forward depth. It will be a massive challenge to try and prevent Latrell Mitchell, Luke Keary and Cooper Cronk from having plenty of time with the ball. Roosters by 6

The Sharks are the leading team in line breaks (19) and equal-first in line break assists (12). On the negative side they have penalised more than any team in the competition (37).

The ever-elusive Tedesco leads the NRL in tackle breaks (25) and is equal-first in line breaks (5), while Keary is always quick to sniff out a break, leading the league in support play (80). Mitchell has conceded an NRL-high nine penalties.

Is there a part of Josh Dugan's body that hasn't been clobbered? Throughout his career he's had knee, elbow, ankle, fractured cheekbone, concussion and hamstring niggles. But he had another head knock in the Parramatta game and the recurrence of a lower back injury. He once said it took around 40 minutes to get all his pre-game strapping done - and we can see why. 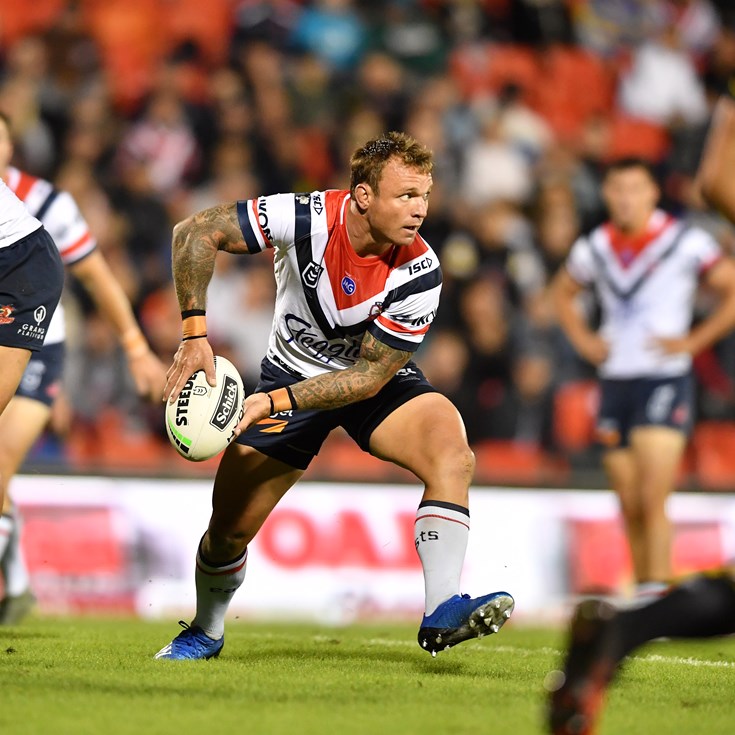