The Panthers lost their first game and were hammered in their third game. They scraped home in rounds two and four before being upstaged by the previously winless Titans last week.

So what should we expect next from one of the so-called contenders for the 2019 premiership?

There were times early in the first half and early in the second when Penrith looked like they could almost do as they pleased against the Titans.

But they lost momentum and were unable to get it back against a side that looked like it had forgotten how to win in the first four rounds.

The injury-hit Sharks went down fighting against the Roosters last week and will be keen to kick the Panthers while they’re down.

Sharks: Will Kennedy comes in at fullback for his NRL debut in jersey No.19. Josh Dugan shifts to the wing and Sione Katoa is out of the side. Jayson Bukuya has been taken off the interchange bench and his spot goes to Braden Hamlin-Uele. Paul Gallen (ribs) is back to bolster the pack and Jack Williams goes back to the bench after starting for Gallen last week. Kyle Flanagan and Aaron Gray were omitted from the squad 24 hours prior to kick-off. Katoa and Bukuya were left out when the squad was finalised an hour before kick-off.

Panthers: In a late change, winger Dylan Edwards has been left out and his place taken by Malakai Watene-Zelezniak in jersey 20. Representative prop Reagan Campbell-Gillard has been relegated to the bench and his place in the starting line-up taken by Tim Grant, who returned from injury last week in Canterbury Cup. Wayde Egan returns from concussion in the hooking role with Sione Katoa reverting to the bench. Isaah Yeo has been cleared of a shoulder injury and will play. Tyrell Fuimaono and Jarome Luai were culled from the squad on Wednesday evening, with Liam Martin replacing Fuimaono on the interchange.

With both teams missing key players and carrying the odd injured soldier, a lot hinges on the battle between the opposing halves. Cronulla duo Chad Townsend and Shaun Johnson have to lead as always with strong actions and words, while Panthers halves James Maloney and Nathan Cleary are rapidly in need of some consistency if their team is going to prosper.

Defence is always a high priority for the Sharks and they’ll have to be especially vigilant on the edges against the likes of Viliame Kikau and James Fisher-Harris. Keeping ex-Shark Maloney and Cleary relatively quiet is crucial, while the outside backs have to be on their toes against Penrith’s speedsters.

Maybe losing to the NRL’s last-place team will jolt the Panthers into playing up to their potential. It really wasn’t all that surprising they lost to the Titans considering the form guide over the first month. Coach Ivan Cleary has to find a way to get his side to stop switching off during games.

Confidence for both teams will be down a little bit. The Sharks are really being tested by all their injuries. A player that really needs to take control from them this week is Shaun Johnson. We still haven’t seen any sort of form from Penrith, they’ve been so disappointing considering the roster they’ve put together. Sharks by 4

The Sharks lead the NRL in line breaks (25), line break assists (17) and off-loads (70) but they have also conceded more penalties (40) than any team.

For a team that had struggled to find its offensive mojo, the Panthers scored a season-high 24 points from 33/39 completions last week against the Titans. The only problem was that their usually reliable defence went missing in the form of a staggering 67 missed tackles. No that’s not a misprint.

The Dragons continue to deny it but the rumour that Trent Merrin will re-join the club won’t go away. If things don’t work out with his former club, Merrin might be a good fit for the Sharks, who need to bolster their pack with age (Paul Gallen) and injuries (Wade Graham, Aaron Woods) taking a toll. If Merrin is prepared to play for peanuts for the rest of this season, there could be a decent payoff with the Sharks down the track. 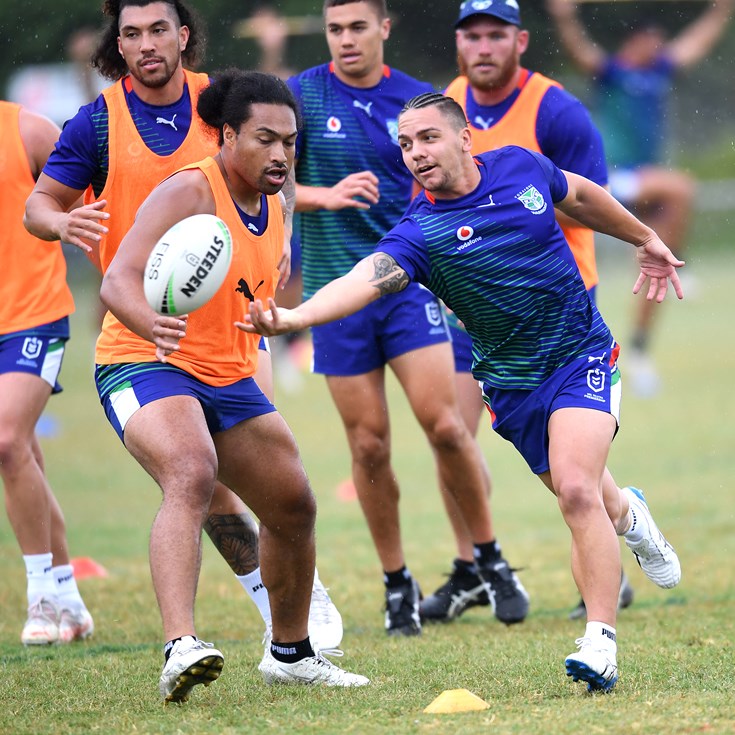 No more upheaval, no more excuses for settled Warriors