Blake Ferguson brought the Eels fans at Bankwest Stadium to their feet with what turned out to be the match-winning try and then sent them into raptures with a backflip in Parramatta's come-from-behind 32-18 win over St George Illawarra on Sunday.

Eels winger Maika Sivo scored his fifth and sixth tries of the season to put an exclamation point on the win. But it was his partner on the other wing that put the Eels clear by eight in the 63rd minute after Parra were clinging onto a 20-18 lead.

Despite recently taking a week off with rib trouble and a broken nose, Ferguson showed little regard for his body as he contested a Mitchell Moses kick, reaching out with one hand to catch the ball and score. The back-flip for the fans in the Brett Kenny Stand then happened.

Eels coach Brad Arthur was full of praise for Clint Gutherson and Blake Ferguson on their input into the game.

"I don't know about the backflips, but he said he was back… he prides himself on making a difference for us out of the back field," Arthur said.

"I sent a message down to him with 25 minutes to go 'this is what you get paid for – win us this game'."

Ferguson said he got the message.

"Someone said something to me," he joked, "Brad is always into me.

"I felt like today we didn't give up on anything. And that set us up for the back end of the game."

And that back flip? It was better than Ferguson's attempt at the Indigenous and Maori All Stars game.

"No-one was on me and I felt like I had a bit of space," he said, adding that he did a bit of gymnastics as a student at Wellington High School in the NSW central west.

Adding to the misery of back to back losses, the Dragons could now be without playmaker Corey Norman with a suspected fractured cheek bone.

Before kick-off, these two sides were lying next to each other (Eels 6th, Dragons 7th) on the Telstra Premiership ladder, making both clubs hungry for this win to keep in touch with the top-four. They both also suffered losses in round seven.

But now the Eels are unbeaten in their two matches at their spanking new home after the 51-6 drubbing of the Wests Tigers. Scoring over 80 points in two games will keep the Parramatta fans coming back.

And they may want to show up anyway to cheer on Clint Gutherson, with the raucous blue and gold faithful breaking into a deafening roar when he scored the Eels second try of the afternoon.

Gutherson's "show me the money" try could not have been more emphatic. He sprinted 70 metres up the middle of the St George Illawarra defence to plant the ball right between the southern uprights.

The 24-year-old is locked in contract talks with Eels management and this was his way of saying "keep me".

Fijian winger Sivo is not off contract until 2020 but he followed three minutes after Gutherson with another 70-metre run. Suddenly after 45 minutes, the Eels were up 18-14 and ahead for the first time in the match.

Then another Fijian-born flyer, this time Dragons winger Mikaele Ravalawa, then scored in the north-east corner to level scores at 18-18.

A sneaky try from dummy half by No.9 Reed Mahoney in the 35th minute opened the Eels' account for the afternoon stopped the home side from heading to the sheds with no points. But the Dragons had the upper hand at halftime 14-6.

Sivo sizzles down the sideline

After a scoreless opening 20 minutes, the Dragons raced to 14-0 in the 31st minute via tries to Ben Hunt and Matt Dufty.

The Dragons fullback is certainly filling his 2019 highlights reel with some gems. After his 65-metre solo effort against the Roosters a week ago, Dufty was part of a 90-metre team effort with the ball passing through five sets of hands.

Dufty and centre Tim Lafai were making Gutherson dizzy as they toyed with him defensively before Dufty scored beside the posts.

Former Eel Norman was jeered constantly from when he received the ball from the kick-off and the crowd kept booing with every high ball he put up, every pass, every tackle he made.

They even booed when Norman was hit around the legs by Tepai Moeroa as he kicked across field – because the referee penalised the Eels lock. They cheered in the 22nd minute when Norman was penalised for a shoulder charge.

In fact the fans kept up the verbal barrage the entire first half, but only sporadically in the second. Norman went off for an HIA in the 54th minute and to check on his cheek.

Centre Zac Lomax finished the game in the halves while coach Paul McGregor and the Dragons faithful will be sweating on both Norman's cheek and key forward Tyson Frizell, who passed an early HIA but was taken from the field in the 35th minute and did not return.

Get Caught Up: Round 8 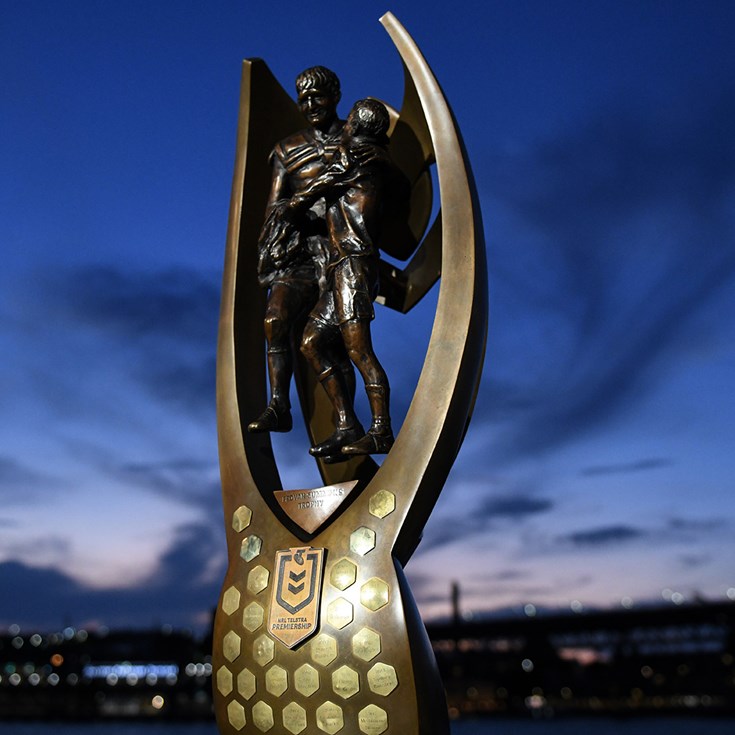