The Souths Logan Magpies will be looking for a breakthrough win when they take on the Easts Tigers in Round 5 of the SEQW Division 1 competition.

Souths have had three tough games to start the season, resulting in two close losses and a draw against some of the competition’s best.

In Round 1, they took four-time defending premiers Burleigh to the limit, falling just two points short, before suffering a 16-4 loss to Brothers Ipswich in Round 2.

A Round 4 draw with the undefeated Wests Brisbane Panthers got them off the mark for 2019.

Captain Annette Brander said the Magpies had maintained the core of their 2018 squad, but have also brought in many new faces who have moved up from Division 2.

While still in a “developmental” phase, Brander is happy with the way her young side has applied themselves this year, especially in defence.

“We’ve had a pretty tough run, but I think the girls have gone really well and the game against Wests was a really good indication that we’re progressing and we’re just hoping to build on that week-to-week,” she said.

“I think what has been really rewarding for us is that our defence has really grown in those games.

"Against Burleigh and Ipswich, who are some of the biggest contenders, I think we surprised ourselves in how well we defended.

“We defended our goal-line a lot in both of those games and in the game against Wests as well. I think we need to learn to have a bit more discipline and once we do that and when we stick to our structures, that’s when things start to come off for us. That’s what helped us come back in the second half against Wests.”

Brander, a Jillaroos regular since 2014 who played for the St George-Illawarra Dragons in the 2018 NRLW, leads a side that also includes the likes of Steph Hancock and Meg Ward.

The representative trio are invaluable assets to the club and Brander says the opportunity to come back to clubland and rub shoulders with the best of the SEQ region as well as the younger players coming through the ranks is an experience she continues to value each year.

“For me, it all starts at club level,” she said. “I would have never represented Queensland at lock if it wasn’t for playing club last year and slotting into that position there.

“I’m learning a lot off Rob (Brough – coach) and off the girls around me in that position. I think it’s a base that you go back to club and that’s where you get to learn week-in, week-out how to improve your game which helps when you go a bit higher.

“And I think it always feels good when you can help out someone who is just coming through. That’s what is really good about the girls we have here at Souths.

“They’re like sponges and any advice or feedback you give to them, they’re taking it on board and they’re using it each week to improve which is really rewarding as well.”

This weekend, the Magpies travel to Langlands Park to take on the Easts Tigers.

The Tigers are another formidable opponent with two wins and one loss to their name so far this year, including a Round 3 win over Brothers Ipswich.

Elsewhere in Round 5 of the SEQW Division 1 competition, ladder leading Wests Brisbane host Burleigh Bears at Frank Lind Oval for a top-of-the-table clash.

The Panthers are unbeaten so far this year, while the second-placed Bears are looking to bounce back from suffering defeat in their last outing; their first loss in 12-months.

It was the Tweed Seagulls who knocked off the premiers in Round 4, and this week they host Brothers Ipswich at 3pm on Saturday. Toowoomba Valleys have the bye. 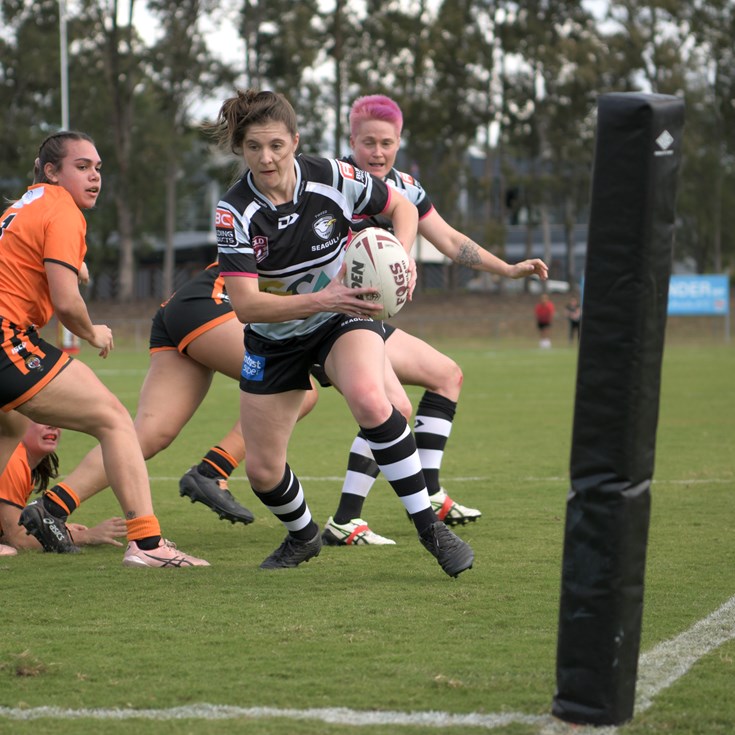