But it's not Nelson Asofa-Solomona's tree trunk legs that have him on edge, even if Parramatta told him he was too small to survive in the game of giants.

It's a "first date" with Craig Bellamy.

The coffee test that secured the Storm's new No.1, a pint-sized pinball earning a measured comparison to Billy Slater from Bellamy himself.

"I got a call from the Storm recruiters, saying the coach and Frank [Ponissi] want to meet you," Papenhuyzen recalls of the mid-2017 machinations that brought him to Melbourne.

"I was with the Tigers then, played in the Balmain district, but I was a Parra junior.

"[Melbourne] had a game against Parra so I went and had coffee with them at the Novotel with my mum and dad with me too.

"It felt like a first date I was that nervous, with my parents to drop me off!

"I had butterflies, sweaty hands. But it must've gone pretty well because my manager messaged me on the way home saying 'they were pretty impressed'.

"Not long after that they put an offer on the table and that's how it all happened."

Papenhuyzen gets past Moses to score

Come Thursday night Papenhuyzen comes up against the Wests Tigers outfit that were filthy to have him stolen from under their noses.

Fair enough given first Brad Fittler, and then Bellamy in pre-game have tossed out compliments to the tune of "he reminds me a bit of Billy early in his career, when he was a lot smaller than when he finished his career and he was quick, there's a couple of similar traits there."

Slater was on hand to present Papenhuyzen with his debut jersey before last month's win over Canterbury.

He was also the first person calling the NSW under-age rep when he signed with the Storm, setting in motion an apprenticeship tipped to pay serious dividends.

"They came back and matched the offer," Papenhuyzen says of the Tigers.

"But it was a bit of a no-brainer to come down to Melbourne and stay here.

"At the time [James] Tedesco was staying, and staying long term. So the best thing for my footy was going to be to go down to Melbourne, learn behind Billy and be around the club itself.

"That was my decision, I can't say I regret anything and I've learned so much from Billy, probably more this year than last year with him now coaching us.

"My decision was based on Melbourne making me be the player I want to be."

That player has been forged by years of touch footy, where Papehuyzen retreated in his early teens.

"Parra said I was too small to make anything of it and I think it got in my head a little bit," he says.

Weighing in at 80kg with no trimmings in sight, Papenhuyzen ranks as the lightest player in the NRL alongside fellow diminutive debutant Tom Dearden at Brisbane.

Jahrome Hughes's concussion against the Eels gives him his first crack at the starting No.1 jumper.

But his first five NRL games have been as Bellamy's "bench fullback", cause to wonder whether the master coach was taking the mickey.

"To get the debut the way I did was a shock. It was a new role that I'd never really heard of, when Craig brought it up I wasn't sure if he was being serious or not," Papenhuyzen says.

"He pulled me over after a training session and said 'you're probably going to debut this week'.

"I was wondering where I was going to play because Hughesy was playing well, the wingers were playing well and Craig goes 'we'll put you off the bench and play you like a fullback in the middle'.

"I've started training in the middle and it's feeling a bit more real. I get put in the ruckies group, which means I get to have big Nelson running at me.

"It's not fun but you do get confidence out of it when I come up against the other big boys in the comp. 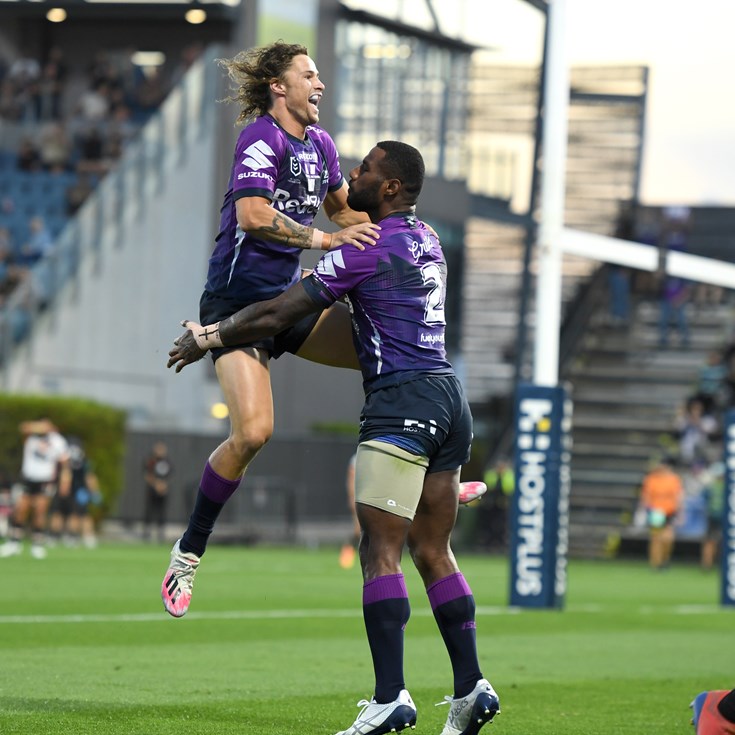