All the official team lists for this week's Telstra Premiership matches.

Panthers: Viliame Kikau is a late out due to illness, with Liam Martin replacing him in the second row. Mitchell Kenny and Tim Grant also start with Sione Katoa and Reagan Campbell-Gillard benched. Caleb Aekins drops off the extended bench. A makeshift centre duo for the Panthers this week after Dean Whare and Waqa Blake were injured in round 11. Starting in their place are Isaah Yeo and Brent Naden. James Maloney returns from a week's suspension, slotting in at halfback for Nathan Cleary (Origin duty). Hame Sele and Kaide Ellis dropped off the extended bench 24 hours before kick-off.

Sea Eagles: Lloyd Perrett replaces Morgan Boyle on the bench in Manly's only late change. Corey Waddell gets a start at lock in place of Blues rep Jake Trbojevic, while Reuben Garrick shifts to centre in place of Brad Parker (broken jaw). Abbas Miski has been named on the wing and Taniela Paseka moves up to the bench. Joel Thompson has been named captain in the absence of Trbojevic and Maroons skipper Daly Cherry-Evans. Haumole Olakauatu was trimmed from the playing squad on Wednesday. Hasler has won 13 from 19 against Ivan Cleary-coached teams.

Eels: Brad Arthur has taken a hard line after last week's shock loss to Penrith, dropping Tim Mannah, Brad Takairangi, Daniel Alvaro and George Jennings to the reserves. Michael Jennings is back at right centre, Josh Hoffman moves to right centre, while Blake Ferguson is back on the wing. Kane Evans has been named to start at prop, Manu Ma'u shifts from lock to back row, Marata Niukore drops to the bench, while Tepi Moeroa is back from concussion and is the new starting lock. George Jennings and Alvaro dropped out of the squad 24 hours before kick-off while Mannah and Takairangi were the last two men cut an hour before game time. Parra have lost three straight.

Rabbitohs: Not surprisingly, the Bunnies have been affected by Origin. Adam Doueihi comes in at centre for Maroon Dane Gagai and Connor Tracey will debut at five-eighth in place of the Blues' Cody Walker. The hooking role will be filled by another debutant, Billy Brittain, while Junior Tatola has been named at lock to cover for Blues debutant Cameron Murray. Bayley Sironen has been elevated to the bench. Dean Hawkins was omitted on Thursday night while Jacob Gagan and Keaon Koloamatangi made way an hour before kick-off. The Rabbitohs have won 10 of their 11 games.

Bulldogs: Adam Elliott will make his return from an ankle injury in a big boost for Dean Pay's men. Corey Harawira-Naera is the man to make way for Elliott and he played Canterbury Cup in the curtain-raiser against the Knights. Raymond Faitala-Mariner moved into the starting side an hour before kick-off with Chris Smith going to the bench. Lachlan Lewis and Kerrod Holland were left out of the squad 24 hours before kick-off while Michael Lichaa was omitted an hour before game time.

Raiders: Good news for Canberra fans with John Bateman declaring himself a certain starter. He had been in England recovering from a broken cheekbone. Bateman's return forces Hudson Young to the bench. Ricky Stuart was forced to make several changes this week with Nick Cotric, Jack Wighton and Josh Papalii on Origin duty and Josh Hodgson out with a broken thumb. Royce Hunt and Andre Niko were the two players omitted 24 hours before kick-off while Emre Guler and Ata Hingano made way an hour before game time.

Titans: The Titans will start 1-17 after Max King and Will Matthews were omitted an hour before kick-off. Jai Whitbread replaces Jai Arrow with the side boosted by Jarrod Wallace being overlooked for the Maroons. Titans winger Dale Copley has scored six tries in his past three games. Ryley Jacks and Leilani Latu were left out 24 hours before game time.

Cowboys: North Queensland will start 1-17 after Peter Hola and Enari Tuala were dropped 60 minutes before kick-off. Coen Hess returns from a groin injury that forced him to be a late withdrawal against the Raiders. The Cowboys have won their past eight games against the Titans. Emry Pere and Javid Bowen dropped off the reserves 24 hours before kick-off.

State of Origin I

Maroons: Daly Cherry-Evans is the new Queensland captain, with Moses Mbye, Joe Ofahengaue and David Fifita to make their Origin debuts for Kevin Walters' side. 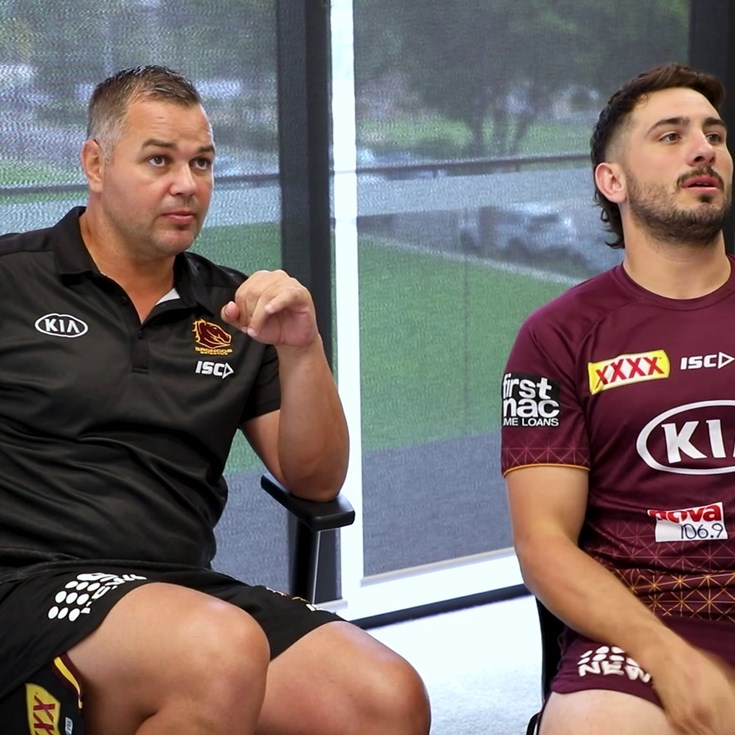