In a brutally physical game, the clinical execution of the Falcons came to the fore as they ran in five tries against a Bears team who had the competition’s best defensive numbers coming into the contest.

Todd Murphy scored a double and kicked six goals for a personal haul of 20 points, while Harry Grant took advantage of his forwards' good work to produce a masterclass at dummy half.

The Bears were far from disgraced against the competition leaders, with Troy Leo bagging another two tries and the middle forwards more than holding their own against an imposing Falcons pack, but they ultimately fell short and their seven-game winning streak came to an end.

There was a 'big-game feel' at Sunshine Coast Stadium and the Bears started nervously with an error in their first possession.

Sunshine Coast made them pay, and Nicho Hynes strolled over from dummy half in the third minute to score a soft opening try.

The game settled into an arm wrestle from there, with both sets of forwards producing ferocious defence.

There was a penalty goal to the Falcons in the 15th minute, but it took until the final seconds of the first half for any more points to come.

They came with some of the Falcons' trademark flair, as Hynes threw a long cut-out pass to Nathanael McGavin who streaked away on the right-hand side.

He banana kicked back to the middle of the field and Todd Murphy inched out Kurtis Rowe in a footrace, putting the ball down centimetres in from the dead ball line to score a miraculous try and take the lead out to 14-0 at halftime.

Shortly after the break the home side took the lead out even further to 20-0, with Tino Faasuamaleaui going over near the posts from close range.

Burleigh needed a spark, and they got it through Dylan Phythian who came off the bench with roughly 30 minutes to go.

He nailed a 40/20 with one of his first possessions, and twice kicked to the in goal for Troy Leo to score tries in the 55th and 60th minute to give the Bears hope of the miracle comeback.

But it was snuffed out by a Falcons team intent on making a statement, as Daniel Dole went over off a lovely short ball by Cooper Johns in the 64th minute.

A trick shot banana kick by Johns rolled around in the in-goal before being put down by Murphy in the 75th minute, while the Bears grabbed a consolation try through Tyronne Roberts-Davis in the final minute.

Falcons coach Eric Smith said he was most impressed by his team's solid defence against the best defensive side in the competition.

"Burleigh's three tries came from kicks because they weren't able to penetrate our line," he said. "We could have done some things better, but defensively we were sound, we were aggressive, and that was really encouraging."

Impressed by his entire 17, Smith rated Murphy's "never give up" attitude as one of the greatest highlights from their 12th straight win. "Darryn Schonig, our forward, was damaging all game; Tino Faasuamaleaui had a really strong game.

"I also thought our centres Chris Lewis and Sam Burns were outstanding defending against Burleigh who have outstanding attack on both edges."

Bears coach Jimmy Lenihan was happy with his side’s physical effort against the clinical Falcons but is hoping his men can learn from their defeat and back-up against Easts Tigers next Sunday.

“They’re a very physical football side,” he said.  “They’ve got very quick line speed and some class players in their group.

“We’ll dust ourselves off and look at where we go next week. We’ll certainly take some things out of the game and look to improve on some things." 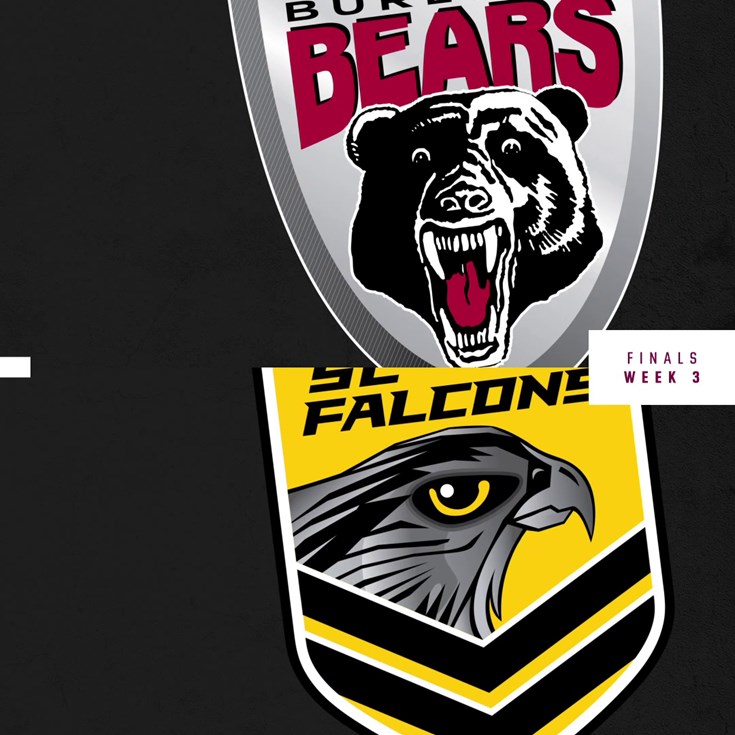 In pictures: Dominant Bears down Falcons