An inspirational speech by Queensland Maroons legend Corey Parker has given Queensland Under 18 forward Jack Howarth the desire never to take his representative jersey for granted.

The 16-year-old Easts Tigers giant is the youngest in the side and the moving delivery to the team by Parker, the assistant coach of the team, has ensured Howarth has grown an extra arm and leg ahead of the clash with New South Wales at Suncorp Stadium on Wednesday night.

"Just taking in the information Corey gives us is so helpful. Him telling us what it means to put on a Maroons jersey has changed my perspective, and that of most of the boys, about what it really means," Howarth, who can also play centre, said.

"What inspired me the most was when he told us that when he first put on the Maroon jersey he took it a bit for granted.

"After that he was out of the team and he had to work so hard to get back, and that made him realise how special and important it is.

"This is the first time I have ever been given the opportunity to wear the Maroon jersey, so it is awesome. I definitely won’t be taking it for granted.

"I’ve missed out on [rep teams] in previous years because of injury and sickness, but this will tick off one of the things that I have really wanted to accomplish this year."

What a weapon!' - Jack Howarth

Parker, who played 19 Origin games for Queensland, said he was thrilled Howarth took so much out of his emotional talk and revealed what he had said.

"We’ve all got a story about wearing the Maroon jersey and I spoke about my journey. Their journey is about to embark. It might be this one game…or a David Fifita-type of story," Parker said.

"When I talk about Origin and Queensland it brings about raw emotion, so here I am in front of the under 18 team just about in tears telling my story.

"My story started in 2004 with two games for Queensland, and then one in 2005. Mal Meninga changed the system in 2006 and it ended up being the start of the [eight series] run.

"I said to the lads that looking back now at 2004 and 2005, I probably didn’t give it the gratitude it deserved. I loved it and respected it but it all happened too quick.

"I said that it then took me six years of hard work and persistence to get back in, which I did [in 2011]. I promised myself that when I got back I would stay there, and that's what happened.”

Inspirational stuff from Parker, and talk to Howarth you get the sense he is a young footballer who is going places just like the Brisbane Broncos legend did.

Howarth is signed to the Melbourne Storm and said later in the year he would hopefully extend his deal for two or three more seasons. He has attended two of the club’s famous pre-season camps in Geelong where he learned plenty.

"It is challenging," Howarth said.

"They have sessions that really push the boys and give us a taste for what it is like to play football professionally.

"I have also done one session with Craig Bellamy when some other boys from Easts did the captain’s run in an opposed session. It was awesome to line up against people that I look up to like Cameron Munster and players that are such big influences on football.

"The Storm is just such an elite club. You won’t find another with a culture like theirs. At training they really find out the people who are willing to work, and catch out the ones that aren’t."

Howarth, like Munster, hails from Central Queensland. He is from the mining town of Dysart and is the son of a miner, Rob.

"He has worked a lot of hours to enable me to do what I do,” Howarth said.

"He does overtime just to pay for all my accommodation. I tell him how much I appreciate what he does for me, and he understands that."

Howarth is a well-rounded back-rower, which is why he looks up to Storm and Maroons forward Felise Kaufusi.

"It would be awesome to do what he can do. He can always find an offload and that is something I like doing," Howarth said.

"I try and open it up  for the faster boys and give them a tip."

Howarth is boarding at Brisbane Boys College and said that while he found first term this year tough, now it was “breezy”.

"I’ve made lifelong mates. The school let me play for Easts in the [Auswide Bank] Mal Meninga Cup and I was really happy with that,” Howarth said.

"Now I’m playing schoolboy rugby union where I am a centre. I love it. There is a lot of decision-making, which I guess I can help a back-rower in the league, just having that experience under my belt.

"I started playing centre in league but as I grew taller I just ended up in the second-row." 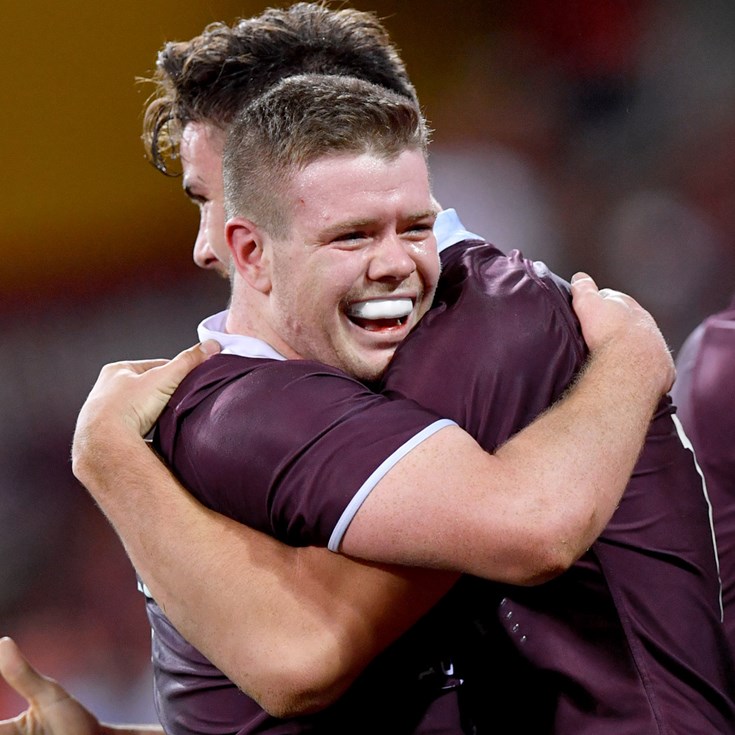