Knights and NRL officials have come out swinging with a hands off edict in response to Michael Cheika's approach to rising superstar Kalyn Ponga about a potential code switch.

Newcastle CEO Phil Gardner described the call from Wallabies coach Cheika to Ponga, reportedly made late last year, as "inappropriate" and "extremely disappointing" given the 21-year-old remains contracted to Newcastle until at least the end of 2021.

NRL CEO Todd Greenberg supported Gardner's stance in a joint statement released by the Knights and the governing body on Friday.

According to the News Corp report, Cheika made no offer to entice Ponga back to the 15-man game he played through his juniors, but Gardiner has come out swinging amid growing speculation on Ponga's future.

"It's not surprising that rugby union have identified Kalyn as a talent they wish to get their hands on," Gardner said.

"What does come as a surprise is that an official from their code would personally phone our talent despite the fact he has several seasons left to run on his contract.

"It is inappropriate for any contact to be made from rugby union – or anyone else for that matter - and it is extremely disappointing."

Ponga is only 18 months into his five-year Knights deal (with a 2022 option in his favour) but his sky-rocketing market value has sparked debate around when Newcastle should re-negotiate with their marquee man.

As a Queensland Origin star and having dominated Dally M voting since shifting from the Cowboys, there's little doubt Ponga can earn over $1 million a year.

He has also spoken openly about the lure of representing the All Blacks, having spent part of his childhood in New Zealand and grown up playing rugby union before graduating from renowned Brisbane nursery The Anglican Church Grammar School.

NRL.com understands that New Zealand-based Super Rugby franchises have previously enquired about Ponga's interest in returning to the code.

Ponga's father Andre told NRL.com that the Knights fullback and his family are happy with his contract position and in no rush to open talks with the club.

"To some people that might sound stupid, but that's what we believe is best for him. People are saying he should take it when he can get it, but in 2021 - let's say he goes backwards, that's what he is worth. That's his value then. To me, that's the reality."

Gardner stressed that Newcastle "will be doing everything in our power to sign Kalyn long-term when the time is right."

While the NRL expressed their displeasure at Cheika's approach, the most lucrative money on offer in rugby comes from European and Japanese clubs, with Wallabies star Samu Kerevi the latest big name lured off-shore.

Premiership and Origin-winning coach Phil Gould is among those to voice concerns that rugby could poach Ponga, calling on the NRL to intervene and ensure he remains in rugby league.

The NRL scrapped the marquee player fund instigated by former CEO Dave Smith in 2016, without head office ever using its 'discretionary powers' to top contracts and keep rival codes from poaching its best athletes.

Of Cheika's call to Ponga, current CEO Greenberg said: "The nature of this interest is certainly unorthodox.

"Kalyn has a significant period remaining on his contract and it would be disappointing to see any contact made to any player under these circumstances." 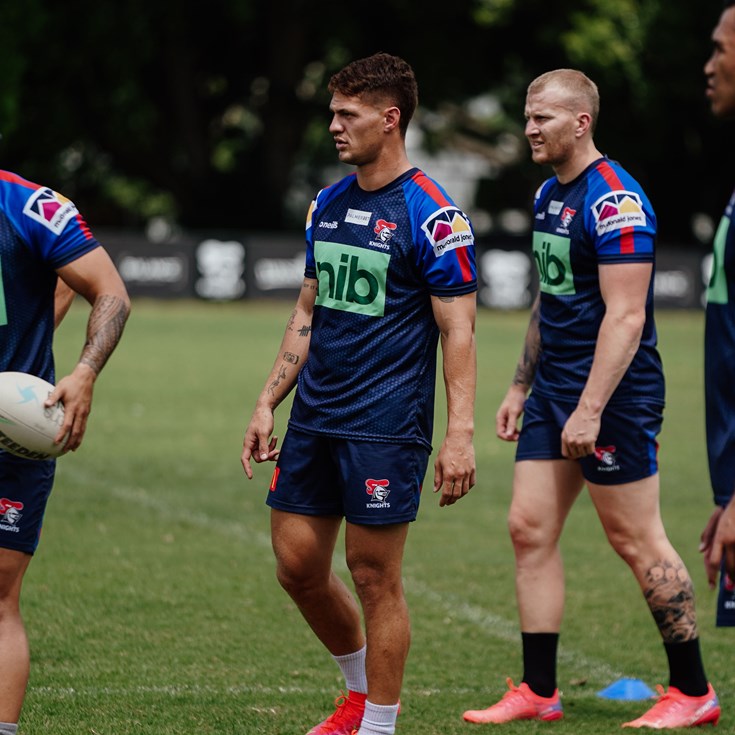 The Ponga blueprint: Stay at fullback, stay at Knights

Ponga crosses for his second try

Ponga to test five-eighth credentials for Maori All Stars