There is no denying Queensland Maroons star Dane Gagai is an absolute machine.

In State of Origin Game I, the 28-year-old scored two tries, had one line break, notched up 270 running metres, 14 tackles and had 100 per cent tackle efficiency.

But the machine spluttered early in the week. Gagai came down with a virus and spent his first few days in camp, after flying in Sunday night, in his room away from team mates.

"It was probably the worst start to a camp I've had. I got here and I obviously wasn't feeling the greatest on the flight; the flight rocked me a bit.

"And then once we touched down in Perth here, I went to collect my bags and they'd forgot to put one of my bags with all of my clothes on the plane. Lucky I had all my Origin gear, but I was short of undies and socks and my casual clothes, so I had to hang around in Queensland gear until my stuff got here.

"Me not feeling well escalated from there and I got pretty crook, but luckily the staff here and the doc, he helped me get through it. I'm feeling a million times better."

The South Sydney Rabbitohs talent said the hardest part about being kept separated from the team was serious "FOMO - fear of missing out" as the team met up for coffees and socialised.

"Sitting in my room was doing my head in," Gagai said.

"Once I did get amongst the group, they quickly told me to get back to my room and get away - not to make them sick. Just a bit of banter, which was good. What I was missing. It's good to be back around the playing group again."

Gagai said getting out for the team's first hit out helped make him feel better and confident moving forward.

"I went to the side and did a few shuttle runs, did a few kicks, and a few little extras. Then I went in, had a shower and came back out. When I came back out, I honestly felt like I had a clear head. The run made me feel so much better," Gagai said.

The machine is now fixed and functioning.

Gagai’s focus is now purely on Sunday’s Origin clash; he said the team definitely had room for improvement after the 18-14 win in Game I in Brisbane.

"I thought we performed well but there was a few opportunities that we missed - a lack of execution. We can improve on that," Gagai said.

"I think some of our defensive sets through the game were outstanding but we need to be a bit more assertive with that from the start of the game rather than later in the game.

"I think a lot of the fans will remember because they were pretty vocal and loud when there was that defensive set, I think in the 56th minute, and we were coming up as a line together and keeping them locked in their 20.

"We know that's going to be a challenge as Origin always is, but being able to do that from the first kick off and first defensive set, rather than 56 minutes into the game, so we'll try and hold that throughout the whole 80. That'll going a focus for us.

"And making sure we know our roles and plays, so when an opportunity does come, we can capitalise on that.

"I think Cooper Cronk said it best - 'in Origin, it's won on moments and when the moments present themselves, you've got to be able to execute'.

So that's going to be a big key for us. But also defence."

Personally, the dad-of-two is ready to rip in.

"For me, it's never been about scoring tries... I'm always about 'how can I help my mate?' As an outside back, playing on the wing, it's about making sure my positioning is correct, counting numbers in defence," Gagai said.

"I think that's something I want to do better in this next game. With the defensive side of it, I want to make sure I'm a lot more vocal in letting the boys know numbers and what shape we've got coming at us.

"Other than that I just want to make sure I get my carries up."

Gagai, impressed with the turn out at the Maroons' fan day in Perth on Wednesday, said he hoped to do all Queensland supporters – and his family - proud when he pulled the jersey on.

"To be able to wear a jersey that so many legends and greats have worn before me. Now I get to represent it," Gagai said.

"Most of the boys have got kids, and even those who don't, just doing it for parents and everyone who helped you get to where you are. You don't want to let them down.

"And then, this group of lads we've got here is such a tight group, such a good group - I consider all these blokes my mates. I'll do anything for them.

We've obviously got the mindset of coming out and winning this game.

"In saying that, it's not going to be easy. There's going to be a lot of challenges. The other side we're coming up against - they're no pushovers. They've got a lot of star, quality players in their team. But we're just focusing on ourselves and doing everything right to get the job done. And that's what we'll be going out to do Sunday night."

Gagai, whose partner Kelly will make the trip to watch him, said the belief shown in the team by coach Kevin Walters was empowering.

"When we don't talk about the other team or mention their name, it's not in the sense of disrespecting them because you respect every opposition you come up against. It's more so about focusing on us and what we're going to do rather than what they're going to do," Gagai said.

"I think that's been the key message from Kev and what we've been driving... believing in what we're doing. Everyone has been doing that, but I'm not going to lie... it has been tricky because you're so used to mentioning the other side, but we've all bought into it.

"We're just going to go out there and give it everything we've got to get the job done."

A job he is confident the Harvey Norman Queensland Maroons will also be able to do Friday night at North Sydney Oval.

"I actually grew up with Brittany Breayley... we were really close at high school at Mackay State High, so I follow her closely. I'll definitely be watching the game and supporting the girls. Hopefully they can get the win," Gagai said. 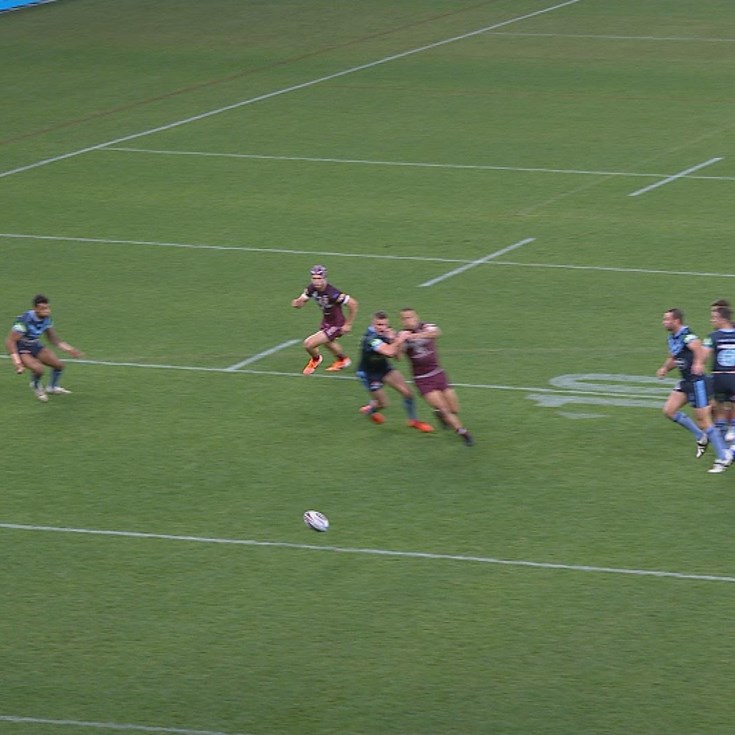