Mid-season addition Scott Drinkwater has been handed the No.1 jersey for his first appearance in Cowboys colours on Friday against the Dragons in Wollongong.

Coach Paul Green pulled a minor selection surprise with the former Storm fullback thrown straight into the starting lineup after arriving in Townsville on Sunday.

Drinkwater's arrival has allowed Green to move Michael Morgan back to the halves alongside Jake Clifford and push John Asiata to the bench.

"He adds to our squad," Green said.

"Jordan's [Kahu] done a great job at the back there for us so far but I think he strengthens us up and adds another threat in attack. He understands defence really well so I think he'll be good for us.

“He’s only had one training session but he's pretty good, a calm level headed sort of kid, so he's fit straight in.”

Get Caught Up: Representative Round

Drinkwater had his fair share of roadblocks at Melbourne with players getting the nod just ahead of him and also through injury earlier this year in the trial match against the Cowboys in Mackay.

He is relishing the prospect of playing regular first grade.

"I loved my time down in Melbourne but it’s good to come up here and get an opportunity to play some NRL and I can’t wait," Drinkwater said.

"I've only played a handful of games so far this year so I’m really eager just to play footy anywhere."

The 22-year-old learned from arguably the best fullback of all time.

“Thankfully Melbourne, to be fair, did the right thing by the kid in terms of his career. He had an opportunity here and we're really lucky and thankful that we've got him.”

McGuire charged for tackle on Maloney

Drinkwater is expected to add another dimension to an offence that has a tendency to misfire for long periods during games.

Green is excited to have Drinkwater at the club but doesn’t want to set his expectations too high.

“He hasn't played for us yet so I don't want to put too much pressure on him," he said.

"He needs to settle in and get used to a new group of teammates and a new way of doing things.

“We've got to trust his instincts a little bit, but he's a pretty instinctive sort of bloke so as long as he trusts those instincts, I'm sure he'll contribute.”

Jordan Kahu has been moved to the centres to make room for Drinkwater, despite fullback being his preferred position.

“The big thing for Jordan is he’s team first, and for us at the moment I think it makes us stronger," he said.

"He's a very good centre. He's played a couple of good games there for us. He did express that he wanted to play fullback and as I said he's done a great job there for us, but given we had a spot that we had to fill, Scott [Drinkwater] makes us stronger across the park.”

Josh McGuire will sit out this weekend’s game after entering an early guilty plea for a Grade 1 dangerous conduct charge for a late hit on NSW five-eighth James Maloney in Origin II.

Green felt there were similar tackles which could’ve been cited.

“It’s State of Origin we’re playing here too. I'm not saying the rules are any different but the games are certainly tougher," he said.

"If you wanted to go through the game with a fine-tooth comb, I think there's probably plenty of those sorts of tackles that didn't come under as much scrutiny and I think his [McGuire] name’s been in the headlines for the wrong reasons in that respect.”

Try of the Week: Representative Round

Green felt for hooker Cowboys hooker Kurt Baptiste after he suffered a season-ending knee injury while on representative duties for Papua New Guinea on Saturday.

The injury is bittersweet for Reuben Cotter, who gets another shot at playing off the bench.

“I was really disappointed for Kurt and that's the end of his season for him unfortunately," Green said.

"Reuben, he's done really well to get himself to where he is at the moment. What's misfortune for Kurt, gives Reuben that opportunity."

Matt Scott was named on an extended bench, though Green said he’s unlikely to play.

“He's probably a little bit too early but again it's a short week for us because we're coming off a bye week but we'll see how he goes," he said.

The Cowboys worked their way into some form with Origin rep Morgan at fullback, but Drinkwater's arrival and back to back losses to Manly and the Wests Tigers prompted Green into a reshuffle.

“When players come back from a losing Origin game there's always the emotional down that comes with it," Green said.

"They're obviously big games and there's plenty that goes into them so when teams lose those guys have got to learn to pick themselves up.

“He seems in good spirits so it's about getting his head around what he needs to do Friday night.” 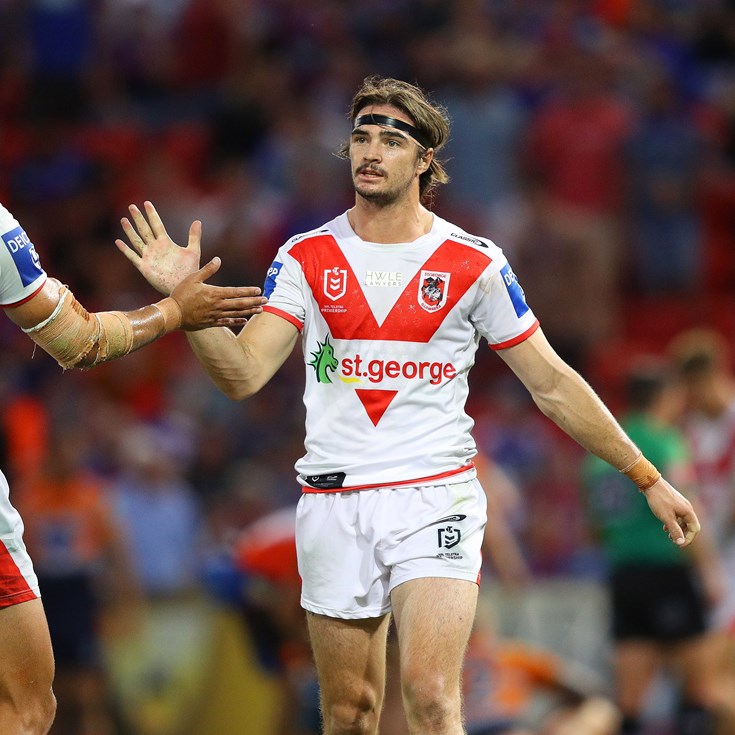