Aaron Whitchurch has overcome more challenges than most to reach his 150th Intrust Super Cup appearance for the Redcliffe Dolphins.

The disappointment that came from not being re-signed by the Brisbane Broncos twice was nothing compared to serious injuries he endured and the psychological battles he conquered to return to the field.

It is the determination of Whitchurch combined with his no-fuss approach to footy and his genuine kind nature that has seen him become one of the Dolphins’ longest-standing first-graders and most loved players.

Dolphins fans have been full of praise for the second rower, who also features as an impressive centre, who debuted for the Dolphins’ Cup side in 2012 as a 19-year-old.

“Back then I was training full-time with the Brisbane Broncos and playing Under 20s,” Whitchurch recalled.

“It was Hook (Broncos Under 20s coach Anthony Griffin) who said he would prefer me to be playing Cup, and told me I was heading to Redcliffe.”

The Stanley Rivers junior knew very little about the Dolphins’ system or team, but relished the opportunity to follow in the footsteps of his father, Duncan, who also played first-grade in the red and white strip.

“I didn’t think too much of it (playing Cup), and as a young kid coming in, I just wanted to play hard,” he remembered of turning up at Dolphin Oval for the first time as a player.

“That team was special. I was playing alongside Dane Gagai, who who just killing it every week; Liam Georgetown, Joey Bond, Delroy Berryman, Luke Capewell and Tommy Butterfield were just ridiculous – scoring tries from everywhere and winning games by 60 to 70 points.”

His Cup debut came the same year that he would debut for the Brisbane Broncos, and play in his first Cup final.

The grand final loss hit hard for the close-knit team and Whitchurch carried that pain for the next six years – until he would finally achieve a grand final victory in 2018.

But, that pain was nothing compared to physical pain Whitchurch endured for so long, although very few people would have realised. That’s the no-fuss attitude that his teammates and coaching staff have long admired.

Spinal surgery at the end of 2012 was the first of many serious injuries that took their toll – physically and mentally.

A recurring theme of Whitchurch’s life and football career is his family. The hardest time in his life recovering from spinal surgery and uncertainty about his NRL future was also the happiest time in his life, marrying his long-term partner Amy.

He battled through 2013 and without an NRL contract, he was unsure of his next move. Always by his side was Amy, who is now joined on the sidelines by their two young daughters Grace, 3, and Isabelle, 1.

The following seasons included their fair share of highs and heartbreak – including reconstructions to both shoulders and ongoing neck issues.

Playing alongside one of Redcliffe’s greatest sons, Petero Civoniceva, in 2013 and 2014 was by far a career highlight that is hard to top – and in 2014, being named the Peter Leis Medallist for the Dolphins’ Player of the Year.

Named after one of the Dolphins’ finest, and someone Whitchurch deeply respects and admires, for a young Dolphin being handed a medal by Peter Leis is hard to describe.

“There have been some very talented players to win that medal, so it is humbling to receive something like this,” Whitchurch said. “And, Peter Leis is just an absolute legend of the club. There’s no one quite like him.”

Leis himself played 261 first-grade games for the Dolphins. Whitchurch joked that he might be a chance of passing fellow Redcliffe 150-game players Ian ‘Bunny’ Pearce (150); Liam Georgetown (151); Vic Tighe (154); Col Weir (157); Ian Thinee (164); but was unsure if he could ever reach the same milestone as his former coach Troy ‘Cowboy’ Lindsay, who holds the record with 314 first-grade games.

Reflecting on his eight-year journey to reach this game, the impressive second-rower said the hardest part has been juggling football, university study and his main priority, family – but none have ever been sacrificed for the other.

You would struggle to find anyone – fan, teammate, coaching staff or opposition – who could tell you of a time where Whitchurch gave anything less than 100 per cent.

The love of Whitchurch’s family will be present at Sunshine Coast Stadium on Saturday afternoon. Amy will have the girls dressed in their recognisable red and white outfits ready to support Daddy, who will be cheered on by his mum, dad and siblings.

It will be a tough contest for Redcliffe against an undefeated Falcons outfit. The Sunshine Coast clashes are even more significant for Whitchurch after the passing of his former teammate and friend James Ackerman. The two clubs play for the James Ackerman trophy each year, but that was won by the Falcons in Round 2.

While the recognition of reaching 150 games solely belongs to Whitchurch, he is very quick to praise his family for their unwavering support that got him through the dark times and allowed him to play 149 games so far; the teammates and coaches at Redcliffe and a special group of people who often go unrecognised.

“Michael Walsh has helped me so much with my injuries; Sloany (team manager Jon Sloan) has been such a big part of creating the great culture at the club and making it feel like family; we have the best trainers who make the place special – Casa (Michael Casablanca), Foo (Gary Worden) and Killer (Bernie Smith)," Whitchurch said.

“The Redcliffe fans also deserve a lot of credit. It’s one of the main reasons why I, and many of the other boys, enjoy playing for this club so much.

"One of the best memories I have is walking into the Leagues Club last year after winning the grand final. The place was packed and it was just awesome to see how much it meant to everyone, not just us. We play for more than ourselves and our teammates, we play for the entire Redcliffe community.” 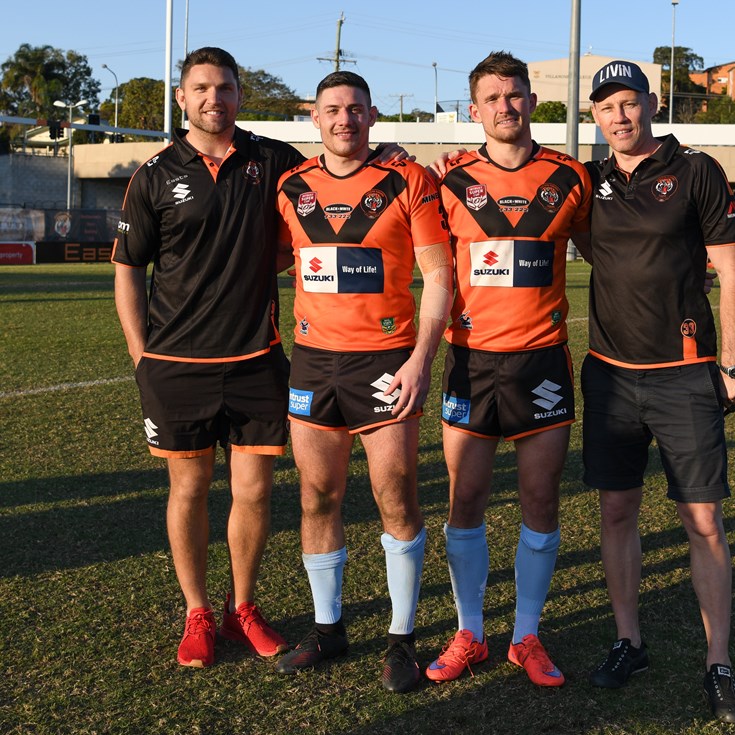 Big thank you to the Intrust Super Cup 2019 retirees