Four tries to Kurtis Rowe has helped the Burleigh Bears come from behind to defeat Ipswich Jets 22-16.

The Bears fullback was the star of the show, scoring a try in the 34th minute and three in the second half to score 16 of the Bears’ 22 points.

Ipswich led by eight points at halftime and Burleigh trailed until the 70th minute in a performance that was less polished than some of their better wins, but gritty enough to please coach Jimmy Lenihan.

“It was always a danger game,” Lenihan said.

“Saturday night, six o’clock in Ipswich is always a tough game, especially after a bye. We were a little bit rusty to start with but to finish off and fight through until the end was really pleasing.”

The Bears were without skipper Luke Page, who was rested after representing PNG against Fiji last week; he will play his 150th Intrust Super Cup game next week if named.

That saw Dylan Phythian push into the second row alongside new Gold Coast Titans recruit Sam Stone, who played 80 minutes on the right edge in his Bears debut.

The Jets also finished the game short, after Peter Gubb copped a nasty collision in the 77th minute and was assisted from the field.

Ipswich opened the scoring in the 12th minute with a penalty goal before scoring the first try of the game in the 21st minute when Jacob Teevan dove on a Julian Christian grubber kick.

Rowe scored his first try in the 34th minute when he threw a dummy and dug into the line on the left hand side of the field, slicing through to score for the Bears.

Another Julian Christian kick led to points for the Jets in the 34th, as his towering bomb hit the deck and bounced up for a chasing Michael Purcell to stretch the Ipswich lead right on halftime.

It was another dummy that led to Rowe’s second try, this time slicing through the defence on the right hand side.

The missed conversion and another Jets penalty goal meant Ipswich still led by six points, until a Sami Sauiluma chip kick on tackle five sat up for Rowe who shrugged off the fullback to bag his hat-trick in the 62nd minute.

Tanah Boyd, another mid-season recruit for the Titans, made his Bears debut off the bench with 20 minutes to go.

The young half made an immediate impact, linking well with his forwards and asking questions of the defence by taking the line on with urgency.

But it was Rowe’s night, as he sold yet another dummy in the 70th minute, crashing over for the match-winning try, his fourth of the game.

Burleigh’s win means they remain in second place for another week, while the Jets slip outside the top eight thanks to Redcliffe’s upset win over the Sunshine Coast Falcons.

In Round 16 the Bears return home to Pizzey Park to take on the Souths Logan Magpies.

The Jets will take on Redcliffe at home. 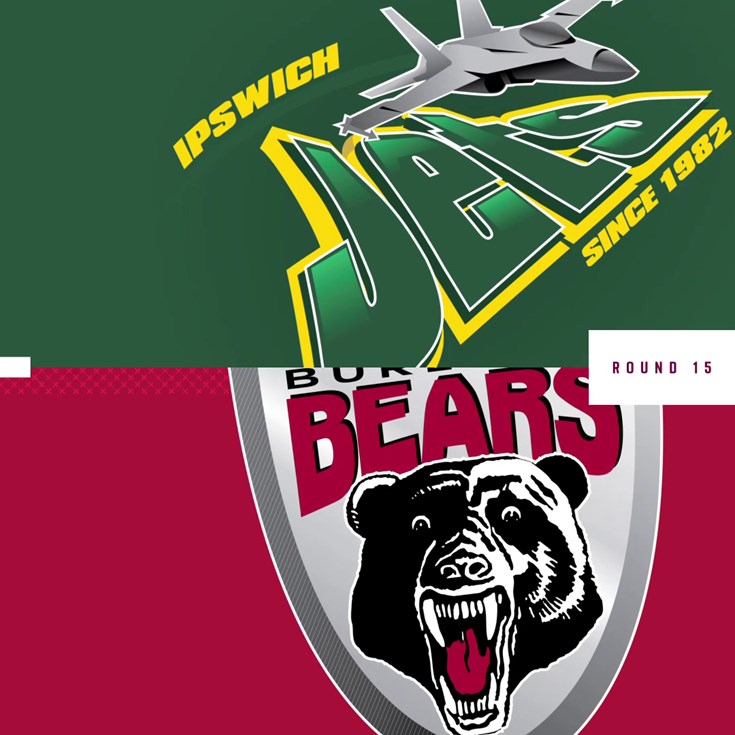