The battle of the north will kick off the Hastings Deering Colts Round 16 in Mackay on Friday night in the first weekend of Indigenous Round.

The Blackhawks accounted for the Tweed Seagulls last week, while the Cutters had a big win over the Magpies on Sunday.

The Blackhawks will be looking for Wiremu Greig to continue his try scoring ways, with the prop scoring two tries before halftime, while fullback and Queensland Under 18 representative Hamiso Tabuai-Fidow ended the Seagulls night just after halftime.

The Cutters will be scanning the field to make sure their own elusive speed man Rayden Burns, gets the ball.

Mackay have won six games in a row and held two teams to nil, so are in terrific form now.

What a weapon!' - Rayden Burns

Blackhawks coach David Elliott reflected on the challenge ahead.

“The Cutters have won six games in a row; it will be a challenge for our guys,” Elliott said.

“We will be missing two of our back rowers Ben Condon and Nathan Barrett who will be with the Queensland Under 20 team so that gives a chance to someone else.”

On Saturday, Norths Devils - who are coming off a loss to Easts which saw them Devils drop down to seventh spot on the ladder - will face the Mustangs.

The Darling Downs side travelled to Cairns last round and suffered a heartbreaking one-point loss, but would have plenty of positives out of the game to take back to Gold Park this week.

The match was a three tries all affair; with the Mustangs losing thanks to a 65th minute field goal.

Browne Park will have a tinge of orange and black this week when the Tigers travel north to see if they can stop the Capras.

The Tigers are in ninth and one point behind Tweed, so a win here could catapult them in to the top eight and set up their final run to September.

The Tigers win over Norths last week will give them plenty of confidence, while the Capras lost to Wynnum by eight points.

The Capras will be looking to Harrison McIndoe and Jacob Spark to get the Capras moving this week.

Tigers coach Ben King said he was happy with the way his team was travelling.

“Our last four games have been what has pleased me, we are defending well, coming back from deficits and beating teams above us,” King said.

“They are all qualities I want to see every week and we are starting to show consistently we have had 50 points scored against us in the last four weeks so that’s 10 points a game that’s committed.”

The Falcons will be setting up nest at Barlow Park on Saturday. This could be the game of the round, with the Falcons in sixth place and the Pride in fourth spot. The Falcons accounted for the Dolphins last week and improved their for-and-against in the process, while the Pride had a one point win over the Mustangs.

The Falcons had seven different try scorers, so the danger signs will be all over the place for the Pride.

Pride coach Dave Scott took some positives away from the Mustangs win, but was focusing on continual improvement.

“We will keep working on our decision making at speed and under fatigue, we train a lot to cope with chaos, when we end our set in a difficult spot do we lose our heads or cope.”

“They are a very good side with big skillful middle men so again we need to respond.”

The Bears are still in first place, but have Wynnum just behind them on equal points, so they cannot afford to drop games.

The Bears beat Ipswich last week and will be trying to do the same this week against Souths.

Souths suffered a disappointing loss to the Cutters and will be keen to get to the Coast and reverse the result.

Wynnum v Tweed will battle it out on Sunday at BMD Kougari Oval. Wynnum are keen to get that top spot and Tweed want to stay in the eight.

Wynnum were too good for the Capras last weekend, while Tweed suffered a loss to Townsville and will be keen to make sure they start better against Wynnum. Letting the Blackhawks score five times in the first 30 minutes is not ideal for any team.

Jets v Redcliffe in Ipswich on Sunday has both teams desperately wanting a win. The Jets relied on ‘Team Josh’ last weekend, with Josh Johnson and Josh Williams scoring their two tries and Josh McCarroll kicking a goal.

Ipswich held on to the ball and had a mountain of possession, but just could not turn it in to points.

Jets coach Brendon Marshall was hoping this would be corrected this week against the Dolphins.

“We had four repeat sets, but just didn’t know what to do; we just get too excited at opportunities and want to act now instead of setting and being calm,” Marshall said.

“Dolphins aren’t too dissimilar to us, bringing through a lot of (Auswide Bank) Mal Meninga level players; this will be a pretty even game.

“Our players will get some more chances training with Intrust Super Cup and they will see how you set up and wait for your chance.”

Redcliffe suffered a loss at the hands of the Falcons, but similarly to the Jets, they ‘won’ plenty of areas within the game.

The Dolphins had more ball, but just could not get tries when they did have it. 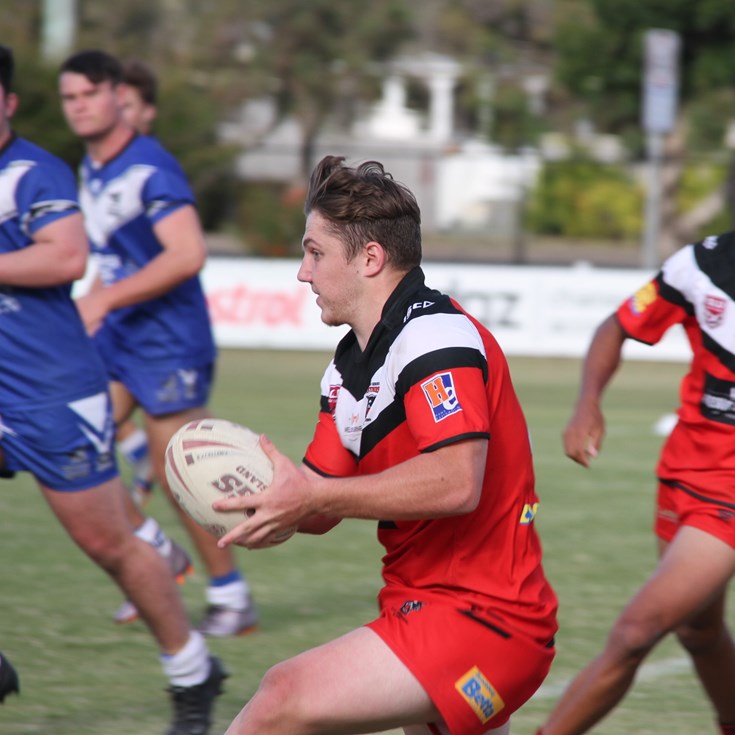 Holcim Cup Round 1 team of the week

Rejuvenated Brimson excited to put back injury behind him