The Roosters' thumping 38-point win over the Knights at the SCG has come at a cost with co-captain and hooker Jake Friend looking at another month on the sidelines.

Friend left the match in the seventh minute clutching at his right forearm after making a regulation tackle.

The Knights win was only his second game back after 10 weeks out with a torn biceps, where the tendons holding the muscle in place had to be re-attached to the arm bone.

"He's got a small fracture around the screw that re-attached the biceps," coach Trent Robinson said, before an immediate follow-up question on how many weeks Friend would now miss.

"I'm not sure is the answer – I don't know what that [new injury] means.

"He's disappointed. We're all disappointed because finally we got back our crew of decision-makers – we got our captains back on the field for the first time in a long time.

"I don't know when they [Friend and Boyd Cordner] last stood together."

The one bright note was that Robinson was sure it was not a season-ending injury for Friend, who has been a key part of the Roosters 2013 and 2018 premierships.

"It's not a couple of weeks and it's definitely not the season," Robinson said.

"A fracture – if you can plate it – is four weeks, and depending on the screw and all that, a fracture that you don't plate is eight weeks. So somewhere between that four and eight would be an uneducated guess."

Lock Victor Radley filled in at No.9 during Friend's last convalescence but some commentators felt he lacked both the punch and control that the Noosa Pirates junior has amalgamated in his 12 seasons with the Roosters.

"There's two options for us really. There's a really good young kid who has played some games in Sam Verrills and there's Victor Radley, who is now a senior player.

"And we've got good forward depth with Isaac Liu (concussion), who didn't play today, and Zane Tetvano (suspension) is available next week.

"So there's a choice around that No.9 position that we need to make for the next month at least."

All eyes will be on Verrills in North Sydney's Canterbury Cup match against the Blacktown Workers at North Sydney Oval on Sunday. Verrills is playing No.9 and an injury-free match would be helpful in Robinson's quest to finalise his team for Bulldogs at ANZ Stadium next weekend.

Meantime, Robinson was pleased that the Roosters finally showed more balance in attack and defence, after losing five of their past seven games.

"There was a little more character in us today," he said.

As for galloping away with seven second-half tries – five in the last 18 minutes – he saw no definitive turning point for the Roosters' late onslaught.

"There were two teams ready to play there and we both played for 60 minutes. And I thought we were much better for the last 20.

"I thought we were in a rush, although we were confident, in the first half. We were more patient and pressuring in the second half." 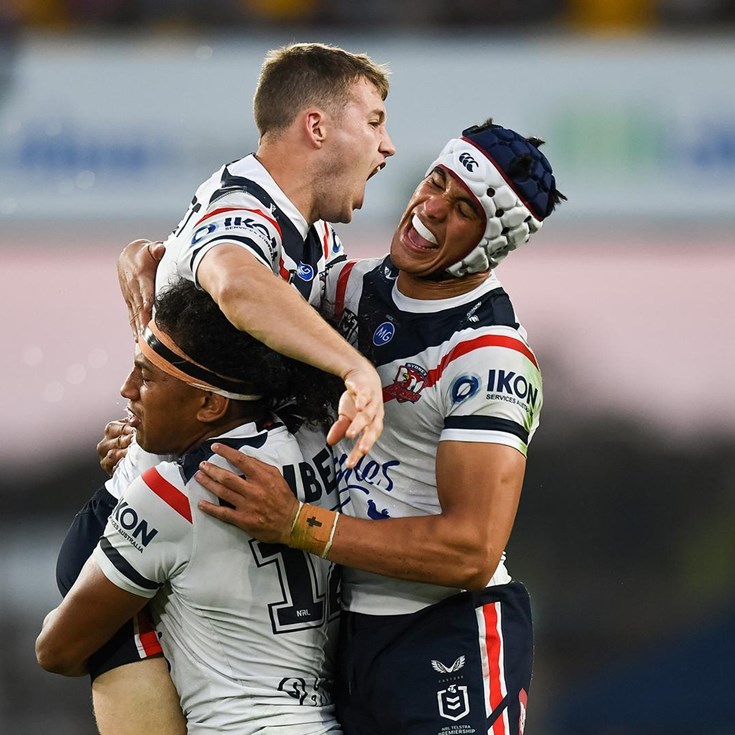