The Sunshine Coast Falcons and the Norths Devils both made the trip to Nanango for their “Get in the Game” Country Week match and Queensland’s fourth oldest town turned on the perfect winter’s afternoon, as the two teams took to the field in front of a healthy crowd.

It was the Devils who looked in control early in the match as they enjoyed the majority of possession and found themselves of the right side of the penalty count.

Norths made it clear from their first attacking set they intended to test the Falcons’ edges with plenty of ball movement and expansive running.

It was smiling assassin Jon Reuben who cut the party short for the Devils, pouncing on a ball spilled by Norths in a fifth tackle bomb 10 metres out from the try line.

Reuben then ran 90 metres with a grin on his face to put the ball down for first points of the match. Todd Murphy was successful with his conversion taking the score to 6-0 after nine minutes.

Following a penalty for a high shot in front of the posts, the Falcons elected to take the two points and extended their lead to 8-0 in the 15th minute.

Murphy was soon back at the kicking tee converting a try of his own, after he chased a pinpoint Harry Grant kick through a hole in the Norths defensive line.

The Falcons third try came after 27 minutes, as five-eighth Caleb Daunt took on the line before sliding a quick pass to Tom Rafter who wasted no time making his way through the gap to score. Murphy slotted the conversion and the score was 20-0.

Proving the 300 metres he clocked up in Round 17 was no fluke, Reuben’s second try of the day was another long-range effort that came nine minutes before halftime.

The speedy winger made a clean break before wrongfooting Norths fullback Jack Ahearn on his way to equal the Falcon’s season try scoring record of 19 tries, which was set by Ryley Jacks in 2016.

Reuben’s record equalling try sent the Falcons to the break with a commanding 26-0 lead.

To be any chance at a comeback, the Devils desperately needed to be the first team to score after halftime. However, despite spending two consecutive sets camped in the attacking zone 30 metres out, they were unable to crack the Falcons’ line.

Norths crossed the line for their first points of the match in the 60th minute as recent NRL debutant Herbie Farnworth scored out wide. The try scoring whiz converted his own try, to have the Devils trailing 30-6.

The game turned scrappy in the last quarter with unforced errors coming from both sides as the Falcons failed to really put the Devils to the sword through a lack of execution.

Despite giving his coach cause for concern as he clutched at his shoulder following a tackle midway through the second half, halfback Murphy remained on the field.

Norths scored their second try in the 75th minute with Pride Petterson-Robati crossing the line and Farnworth kicking with the conversion to take the final score to 30-12.

Despite a somewhat inconsistent second half, it was still a solid performance from the ladder leaders, with special mention going to player of the match Grant, who was equally outstanding in attack and defence for the Falcons.

The young hooker, racked up 51 tackles and consistently took the ball to the line which kept the Devil’s defence guessing.

Falcons try scorer Rafter also did plenty of defensive work earning himself second place on the most tackles list.

Winning coach Eric Smith praised his team’s ability to adapt during a busy State of Origin period that saw plenty of players come in and out of the side due to their affiliation with Melbourne Storm.

“I was very pleased with the effort and urgency shown, especially the first half,” Smith said.

“I can’t praise this squad enough, no matter who comes into this team they manage to find a way to win.

He was also delighted to take the game to regional Queensland, praising the initiative.

“I love getting out here to these bush grounds and bush communities. It’s the type of place I grew up playing footy in country New South Wales.” 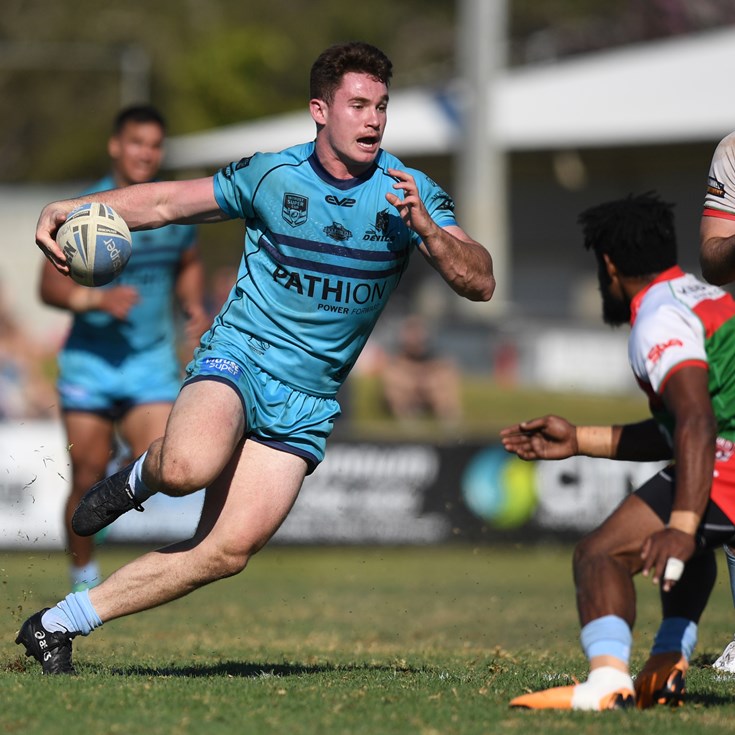