A four-try onslaught in the second half has helped the Raiders bring Penrith's seven game winning streak to an end with a hard-fought 30-18 victory at Panthers Stadium on Sunday afternoon.

The visitors took a 12-6 lead into halftime and were forced to defend their line at a crucial stage in the second half to maintain their two-point buffer inside the top four on the Telstra Premiership ladder after Manly's win over Melbourne on Saturday night.

Canberra were forced to defend their line for the opening 15 minutes of the game with just a lone try conceded through Brian To'o leaving them to trail 4-0 early, but it was all relatively smooth sailing for the remainder of the contest.

Some gritty goal line defence from the visitors fended off any further points and they were soon rewarded at the opposite end of the paddock when Josh Hodgson sent Josh Papalii over from close range.

Canberra began to get into their groove in attack on the back of their first try of the afternoon and the Panthers then found themselves down to 12 men when Jarrod Croker was deemed taken out in a professional foul effort by Dean Whare after Hodgson grubbered a ball through in a try-scoring situation.

The visitors immediately took advantage of the extra man in attack with Elliott Whitehead charging over in Whare's vacant position on the right edge.

Tensions began to boil over between the two clubs with both captains receiving a caution after Corey Horsburgh and Nathan Cleary came together before halftime.

Both sides responded after the break with tries to leave the Raiders maintaining a six-point advantage.

English international John Bateman created enough space for Jordan Rapana and Michael Oldfield to link on the right edge with Aidan Sezer finishing off a kick back in-field to score an entertaining four-pointer.

If the Raiders' effort was good, Penrith responded in fashion with a try of their own through some razzle dazzle play from James Maloney.

The veteran playmaker, who announced he'll depart the Panthers for France at season's end earlier in the week, chipped ahead for James Fisher-Harris, who found front row partner Moses Leota in support to go over under the posts.

Back-to-back errors from Penrith wingers Brian To'o and Josh Mansour swung momentum back in the Raiders' favour midway through the second half with Charnze Nicoll-Klokstad pouncing on Mansour's error in-goal.

The strong crowd of 15,560 voiced their displeasure over the Nicoll-Klokstad ruling with the Raiders fullback planting the ball down simultaneously with Panthers centre Brent Naden.

Tempers flare between Panthers and Raiders

A clumsy high shot from Cleary on Croker pushed the visitors' lead further ahead minutes later with Rapana darting over in the corner despite the effort of four Panthers defending attempting to take him over the sideline.

Penrith, who were missing Viliame Kikau through suspension, struggled with their set plays until a charging run from James Tamou close to the line got them back to within eight points with 10 minutes remaining.

A one-on-one strip from Bateman on a hard-running Reagan Campbell-Gillard from the kick-off killed off any hope of a miraculous Panthers comeback with the Raiders back-rower sealing the game late with a runaway try just before full time. 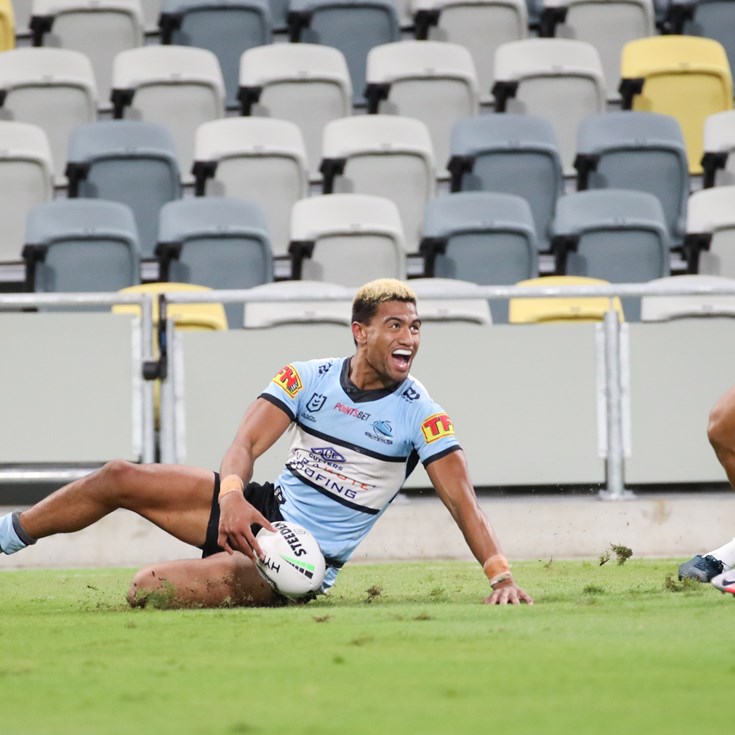 Bellamy: We need to get the fringe players playing