The Falcons' Trent Schaumkel and Cory Parker both scored doubles, making up four of the Falcons' eight tries scored during the big win, and the Capras' BJ Aufaga-Toomaga scored all 12 of Central Queensland's points with two tries and conversions.

The home side took to the field without stars Harry Grant and Todd Murphy but didn’t appear to be missing fire power with prop Schaumkel crossing in just the sixth minute.

Siti Moceidreke got off to a great start filling in for Murphy with the boot, successfully slotting the first conversion. The score was 6-0 after eight minutes.

Clearly not content with just one try, Schaumkel barged his way over for another five minutes later, the conversion was again successful taking the score to 12-0 after 13 minutes.

Following a huge defensive effort from Jon Reuben, who trapped his opposite number in goal from the dropout, the Falcons found their way to the line for their third try. This time it was hooker Sam Burns diving over under the posts.

The kick was successful, and the Falcons were looking sharp after scoring 18 points in just 17 minutes.

Following a Falcons mistake the Capras made the most of their opportunity as centre Aufaga-Toomaga collected a grubber to score the Capras' first try of the match.

Aufaga-Toomaga converted his own try, and the Capras were trailing 18-6 after 21 minutes.

The two teams then traded both possession and mistakes, with both the Falcons and the Capras blowing several try-scoring chances due to handling errors.

It was the Falcons who managed to regather their composure as they scored back-to-back tries in the lead in to half time.

The first came after halfback Caleb Daunt took advantage of the Capras' failure to mark up, running through a gaping hole in the line with just three minutes to go before the break.

After converting Daunt’s try, Moceidreke set up the next try with an impressive cut out pass to Reuben who turned the ball back inside to centre Parker to score.

Looking right at home in the No.6 jersey, Moceidreke then slotted his fifth consecutive conversion to take the Falcons to the break with an imposing 30-6 lead.

The second half did not start well for the Capras as former NRL player Eddy Pettybourne was sent from the field for 10 minutes for dissent.

It took the Falcons seven minutes of Pettybourne’s ten-minute punishment to capitalise on the overlap created by the prop’s absence, as centre Parker crossed for his second try out wide. Moceidreke missed the conversion and the score was 34-6.

Despite lacking some intensity in the second half, the Falcons worked hard through the middle and it paid off some impressive offloads leading to a try to Moceidreke in the 61st minute. Following a successful conversion, the Falcons extended their lead to 40-6.

In the dying stages of the match a Nicho Hynes cut out ball landed in the waiting arms of Nat McGavin for the Falcons' eighth and final try. The conversion was unsuccessful taking the score to 44-6 with just minutes left to play.

The Capras closed out the match with a consolation try on the siren to Aufaga-Toomaga, the only Capra to make it onto the scoreboard, converting his second try and taking the final score to 44-12.

The Falcons face Mackay Cutters in Round 20.

The Capras will play Townsville Blackhawks. 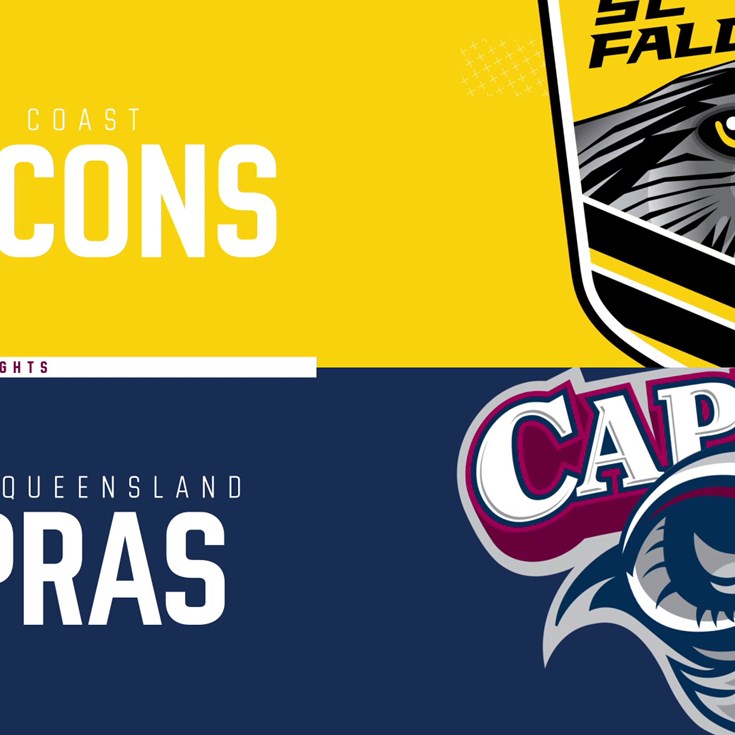