Benji Marshall has orchestrated a masterclass to help Wests Tigers keep their finals hopes alive and derail Newcastle's in the process with a record-breaking 46-4 victory at Campbelltown Stadium.

The joint venture took a 30-0 advantage into half-time with five unanswered tries as the Knights responded poorly to news earlier in the week Nathan Brown would leave at season's end to be left embarrassed in front of 11,107 in Sydney's south west.

On a night the Wests Tigers farewelled club great Robbie Farah with a lap of honour, it was Marshall who made an early switch to hooker his own to provide the spark needed around the ruck, before Josh Reynolds added his enthusiasm midway through the clash in his first outing since April.

Meanwhile, questions are likely to be asked of the Knights ahead of their final fortnight of the regular season with the side out-enthused and disinterested with their top eight hopes on the line.

Tries to Ryan Matterson and Robert Jennings off the boot got things started for the home side in the opening quarter of the game before Esan Marsters and Luke Garner crossed on the left edge in near-identical fashion.

A further try to David Nofoaluma from the boot of Marshall racked up the home side's biggest lead after 40 minutes since round 26, 2006, while for the Knights, it was their worst half-time deficit since round 20, 2015.

Superstar fullback Kalyn Ponga had a night to forget in arguably his worst performance of the year with a handling error, intercept pass that led to a try and kicking the ball out on the full from the restart.

Marshall continues first half masterclass with kick for Nofoaluma

The frustrations grew deeper for the visitors in the 51st minute when Nofoaluma grabbed a double with a deft kick for himself in the north-western corner of the suburban venue.

The points continued two minutes later when Luke Brooks and Chris Lawrence linked with Marshall to send Nofoaluma over for a hat-trick, the first of his NRL career, to bring the Wests Tigers faithful to their feet.

Marshall continued to bamboozle the visitors and wind back the clock with a total of five try assists to deliver coach Michael Maguire his 10th victory in as many games against the Hunter-based club.

His fifth effort to set up Michael Chee Kam from close range delivered the Tigers their biggest-ever winning margin over the Knights.

The visitors finally got on the board with six minutes remaining through Aidan Guerra, who streaked away after picking up a stray pass from Mitchell Pearce on the left edge. 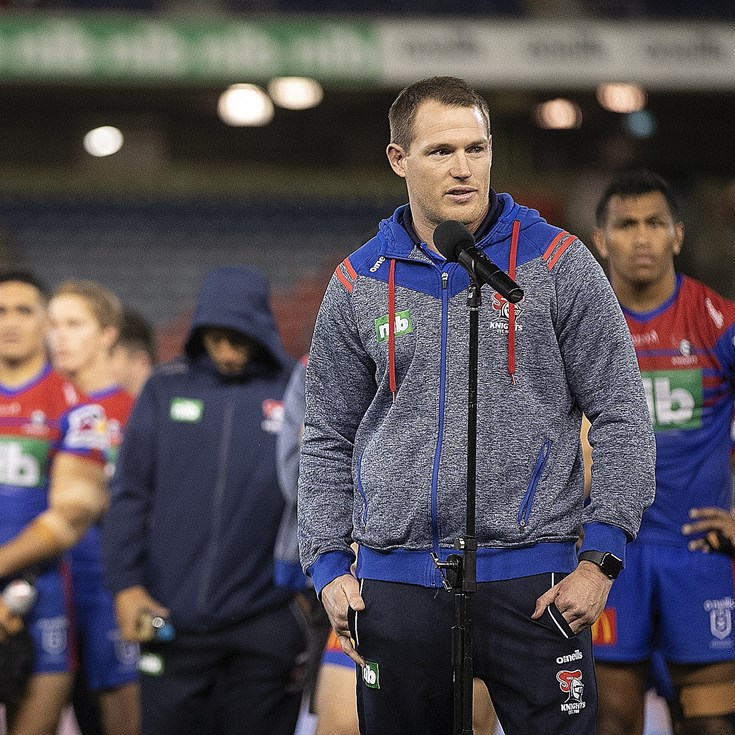