A depleted Tweed Seagulls ground out a tough 12-10 victory against Northern Pride at Piggabeen Sports Complex this afternoon in a historic day for the only New South Wales-based club in the Intrust Super Cup.

Not only have the border club secured a home semi-final against defending premiers Redcliffe Dolphins in Tweed’s first finals appearance since 2014, but the 36-10 victory for Matt King’s Hastings Deering Colts means the Seagulls have teams in the finals in all three grades - Cup, Colts and Mal Meninga Cup - for the first time.

The Pride played like they had nothing to lose, creating second-phase attack from constant offloads and spreading the ball early in the tackle count as hooker Jordan Biondi-Odo and halves Jared Allen and Jack Campagnolo proved a constant threat.

However, while the Seagulls attack had its moments with some crucial errors made in possession on each side of half-time, the resilience and consistency in defence showed the sort of character the Seagulls will need to take into the finals next week.

It was evident in the last attacking play of the game by the Pride.

After gaining a line drop out with three minutes remaining after forcing Ione Seiuli, who was outstanding when forced from the forwards to the wing to cover for Walters, into the in-goal, after he safely disposed yet another dangerous bomb, fullback Cephas Chinfat looked like he might score in the right corner only.

But Seiuli and centre Treymain Spry scrambled brilliantly and forced Chinfat to lose possession as he desperately tried to keep the ball in play before going over the touch line.

It was a second-half penalty goal from Lindon McGrady that separated the teams on the scoreboard after Pride hit back from 10-0 down to level at 10-10.

“It was a good win in that we showed a lot of resilience and defensive character,” a relieved Tweed coach Ben Woolf said.

“They threw a lot at us and were prepared to regularly throw the ball wide, and their kicking game was good, so I was proud of the way we grinded out a really important win.

“We’ll have a few players coming back next week and we can take some momentum into the semi-final from four straight wins. We got the job done.”

Five-eighth Luke Jurd became the major playmaker with Taylor a late withdrawal and hooker Brent Woolf playing the entire game in the halves, and he handled the role well despite constant kick pressure from Pride forwards that saw him smashed to the ground several times after squeezing out kicks.

He created his side’s first try from a neat grubber on the final tackle that was pounced on by second-rower Lamar Liolevave.

McGrady added the extras from in front of the posts to give Tweed a 6-0 lead after an evenly contested opening 16 minutes.

Just five minutes later a McGrady kick was on the mark, this time a chip-kick that was plucked out of the air by centre Spry on the right. McGrady was unable to convert for the Seagulls to take a 10-0 lead after a quarter of the match.

However, winger Walters succumbed to a knee injury at that time and left the field and Tweed had to shuffle Seiuli to the flank.

Pride were on the scoreboard after the Seagulls knocked on from the kick-off, from a well-executed left side shift involving Allen and Chinfat who gave left winger Gideon Gela-Mosby a free 20-metre run to the line.

The Pride drew level 19 minutes into the second half when yet another offload set the Seagulls on their heels.

Pride threw the ball outside, then in, on the last tackle in Tweed’s quarter and finally fullback Chinfat kicked to an unmarked Gela-Mosby who picked up the ball on the full and strolled over. Campagnolo landed the conversion from wide out.

A McGrady penalty goal with 15 minutes remaining saw Tweed regain the lead 12-10 and they held Pride out despite several frantic attacking raids and a 40-20 by Biondi-Odo with 12 minutes remaining. 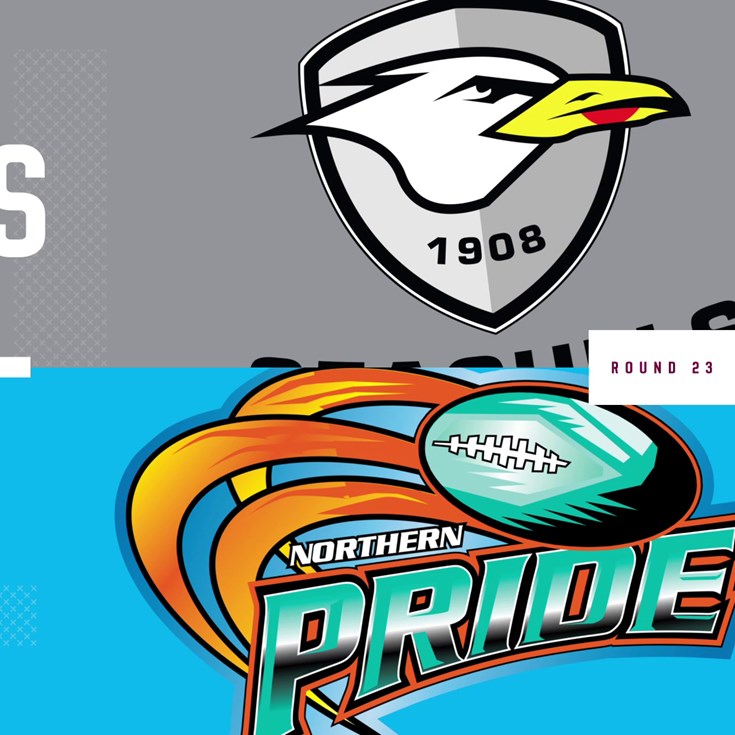