The PNG Hunters were able to end their season with a win after the experience of Ase Boas shone through in their 25-24 win over the Souths Logan Magpies.

In an entertaining and end-to-end match which saw both sides with nothing to lose throw the ball around; a Boas field goal in the 78th minute proved the difference in the end.

Ironically, he had an off day with the boot when it came to conversions, and it was up to his halves partner Nicky Hasu to slot the last two conversions attempts.

With both sides desperately wanting to end their season on a winning note, emotions were high at Davies Park – and especially so for the Magpies who farewelled two of the “nice guys of rugby league” in Shaun Fensom and Sam Tagataese.

The two Broncos-contracted forwards led the Magpies out onto the field, with a large group including close family having gathered to thank Tagataese especially for his service to the game.

Like their retiring team mate Brendon Gibb last weekend – both NRL-experienced players were able to post crowd-pleasing tries in their final matches for the Magpies, with Fensom’s coming in the opening minute of the game.

It came after a break up the middle of the field by Manaiah Cherrington who then passed back inside to Fensom in support to get the Magpies on the board in their first set with the ball.

However, the Hunters hit back almost straight away thanks to veteran back Adex Wera after some nice passing found him out wide before he fed the defenders a dummy before diving over on the right edge.

It was a seesawing game, with the sides going try-for-try in the opening stages.

Matt Soper-Lawler – who at the start of the game needed three tries to stand alone at the top of the leading try scorers list – started his quest with a four-pointer in the 17th minute after he followed through on a Guy Hamilton break and went over out wide.

Souths nearly went back-to-back when George Fai reached out after he saw a try beckon, only to lose the ball over the line.

Instead, it was the turn of Hunters fullback Brendon Gotuno to score in the 24th minute, with the try coming after a good pass inside by Bland Abavu.

They backed that try up with another out wide when Paul Wawa crossed, only to give up the lead to the Magpies in the shadows of halftime when Mitch Frei proved too big and strong to hold out to give the home side a 14-12 lead at the break.

As they did in the first half, the Magpies opened the scoring in the first minute back from the break, with Soper-Lawler over for his second to draw level with Falcon Jono Reuben as the competition’s leading try scorer with 23.

He had two more opportunities in the game but was unable to claim the honour outright, with one kick for him into the Hunters in-goal going too deep – while he dropped another chance over the tryline to the audible despair of his team-mates.

The match continued to sway in the balance, with firstly Junior Rau getting the advantage for the Hunters before Tagataese’s try wrestled back the momentum.

However, Hunters skipper Moses Meninga took matters into his own hands in the with a rampaging run to the line which resulted in a try under the posts in the 69th minute which Hasu converted to lock the scores at 24-24.

The game continued to be played in an end-to-end fashion – and with time running out, Boas lined up a field goal attempt which was charged down by the desperate Magpies. However, they were unable to regather the ball, giving the Hunters six-to-go, which they used to again position Boas for the – this time – winning kick.

The Magpies had one final charge for the win, but were brought undone when they were sent over the left-hand touch line in their last-ditch attempt to score.

After the match, Hunters assistant coach Glen Nami said he was proud of the team’s fighting spirit.

“It’s been tough, but coming out fighting to the end is something that the boys have done and I am so proud of them, I am proud of the efforts today,” Nami said.

“We talked about this during the week, we wanted to finish on a high and be more positive (to) end our season.

“Everyone did great; everyone’s efforts (were) good.

“I think Ase (Boas) played well – his leadership was obvious, and we had boys like Stanton (Albert) leading up front and I think Ase and Stanton were good today for us.

“We are grateful for the win.” 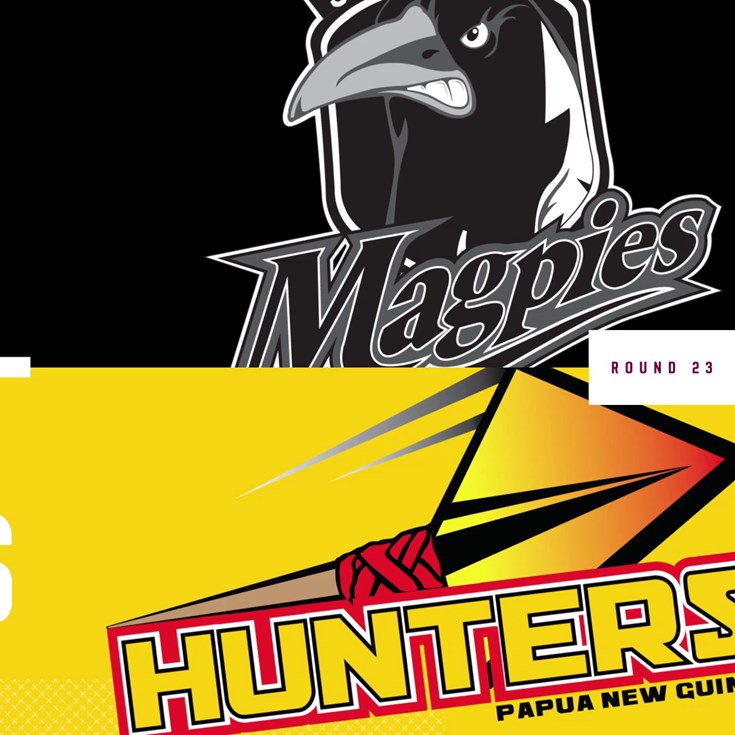 Hunters hold on for hard-fought win over Magpies