Dane Gagai says he felt Jake Trbojevic tug on his jersey as he made his break up field towards the Manly line in South Sydney's 34-26 semi-final win on Friday night.

But the Rabbitohs centre isn't prepared to say the sin-bin penalty was too harsh on Trbojevic.

"I did feel him grab me," Gagai said, not wanting to venture an opinion on whether it was worth a penalty only.

"I don't know. That was a decision made. I'm just out there playing footy and I guess the refs have their job to do and I have my job."

On Saturday NRL Head of Football Graham Annesley reiterated his post-match statements that referee Gerard Sutton had made the right call.

"Our game doesn't involve running blockers like in NFL, so that's why we have a rule called 'obstruction'," he told NRL.com. "It's only players who are in possession of the ball that are entitled to be in any way contacted.

"Now I know occasionally there is incidental contact, but in this particular case he [Trbojevic] had a handful of jersey in his left hand and his right hand on Gagai's shoulder.

"We're not playing Gridiron where you can take players out or support players out. Anyone that doesn't have the ball has every entitlement not to be interfered with."

Television footage in the Manly sheds post-game showed an animated coach Des Hasler talking with Annesley on the telephone. Then in his regular post-match press conference Hasler said his side was "dudded" by the Trbojevic sin-binning.

While Annesley said he had "no issues at all" with his private conversation with Hasler, the NRL executive would look at the coach's public comments on Monday to see if any action should be taken.

Later on Channel Nine, Hasler backed away from his earlier comments but CEO Todd Greenberg could find he commented unfairly on the performance of match officials.

"It's not my decision. It's a matter for senior management," Annelsey said, when asked if Hasler faced a breach notice.

The 67th-minute indiscretion had huge consequences for Manly, who led 26-20 at the time. The Rabbitohs took advantage of a 12-man opposition and scored off the next set through John Sutton.

Gagai, who broke the Manly line inside his own half, raced 20 metres before passing to Murray.

Later in the dressing sheds he said he didn't think he had the leg power to score.

"I broke away and I knew I was in the clear and that I had Jake on the inside but I just couldn't gather my feet quick enough," he said.

"Then I saw Cam coming up on my left and him being the player he is I just needed to get him the ball.

"I wanted to back myself but I couldn't get my feet going properly."

The Queensland Origin back had his left thigh heavily strapped but said he was 100 per cent right to play.

"I felt good. Obviously a bit of soreness at the back end of the match but no concerns through it," Gagai said.

"I moved to fullback so there was a fair bit of running around there on the goal line back and forth, so some fatigue set in."

But even through the haze of exhaustion, Gagai knew he did not have his best game by a country mile. He made three tackle-breaks but he missed seven tackles – mostly on Manly centre Moses Suli.

"I was disappointed in my own performance personally. The boys were outstanding to come with the win so there's a bit of mixed emotions on my part," said Gagai, refusing to hide behind any excuses.

"I'm glad I get a second chance at it. We go to the prelims now and I can put that game behind me.

"I will look at the things I need to look at, and be better at. I'll work on them throughout the week.

"I made way too many errors trying to push stuff and thinking too much.

Bennett: I thought we were behind at the break

"My natural game is to play what's in front of me and I kind of went away from that."

Getting his preparation right ahead of Canberra in next weekend's preliminary final will involve some emotional pain with match video and analysis.

"As hard as it is to watch you've got to sit there and go through it – you don't want to – but you have to in order to get better, so I can get it into my own head," he said.

"I don't ever want to dish up something like that again. I'm definitely going to be better next week against the Raiders because they're in good form and playing some good footy."

Experience the 2019 Finals Series and 2019 Women's Premiership live. Make sure you get your tickets now 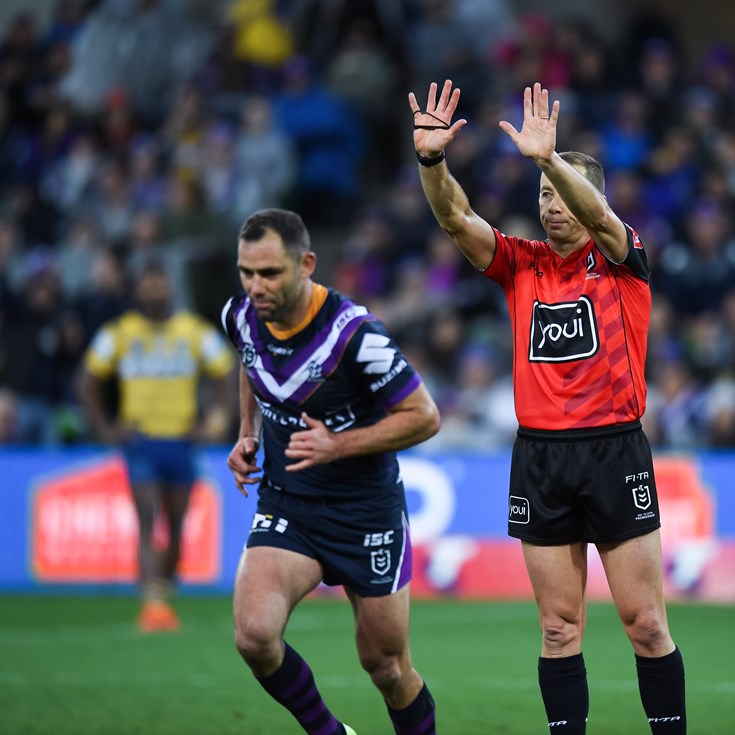