The Australian Schoolboys will unleash two of the most promising young halves in the game when they clash with the Junior Kiwis at Dolphin Stadium on Sunday.

Sam Walker, son of former NRL star Ben Walker, will partner Toby Sexton in the halves with the duo set to complement each other to perfection.

Sexton, a Palm Beach Currumbin [PBC] High product formerly contracted to the Canterbury Bulldogs, has just signed a long-term deal with the Gold Coast Titans while Walker is off to the Sydney Roosters next year on a two-year deal.

Walker, who attends Ipswich Grammar School, met with coach Trent Robinson and star five-eighth Luke Keary before making his decision to leave the Brisbane Broncos system where the ethos of the club best fitted in with his own philosophies on the game.

Queensland Under 18 assistant coach Brad Davis, who is also a teacher at PBC and set to move up to coach the Open A side next season, said the duo would complement each other in the halves for the Australian Schoolboys.

"Toby has just signed for three years with the Titans and he has got to this level because of the amount of dedication he has put into the last five years. His success is all on the back of hard work," Davis said.

"He has an outstanding kicking game and is level headed. You talk about game management and that is Toby all over.

"Sam is super skilful and understands the game really well. If there is half an opportunity you can guarantee that he will be calling for the ball and chancing his arm."

The Junior Kiwis are also blessed with quality halves with New Zealand Warriors duo Paul Turner and Sione Moala set to cause plenty of headaches of their own.

"Sione Moala is 17, turning 18 this year, and will play in the seven jersey. The Warriors have a big wrap on him,” Junior Kiwis coach Ezra Howe said.

"Our other half is Paul Turner who was the Sonny Fai Medallist and is currently in the Warriors' top squad. He played Canterbury Cup this year. The good thing is that we probably have around 14 players who played in the Canterbury Cup competition this season."

The Junior Kiwis have plenty of strike and will play Starford Toa at fullback. Toa made his NRL debut for the Newcastle Knights this year and, in a bizarre twist, has also previously represented the Australian Schoolboys in the past.

The back-row confrontation looms as a cracker with PBC enforcer Brendon Piakura lining up alongside Melbourne Storm signing Jack Howarth for the Australian Schoolboys.

Davis also has big wraps on that pair as well.

"Brendon is new to PBC and is a really threatening back-rower and damaging defender. He can cut people in half," Davis said.

"He is also really smart with his line running and vision. Alongside him Howarth is a dynamic back-rower with a lot of speed and he will be very hard to handle. Jack is a growing every day and I am sure the Storm will develop him into a strike back-rower."

The Junior Kiwis have plenty of strike of their own in the back-row. Roosters-contracted Christian Tuipolutu will line up alongside Charbel Tasipale who Howe said had an outstanding season with Parramatta in the Jersey Flegg competition. 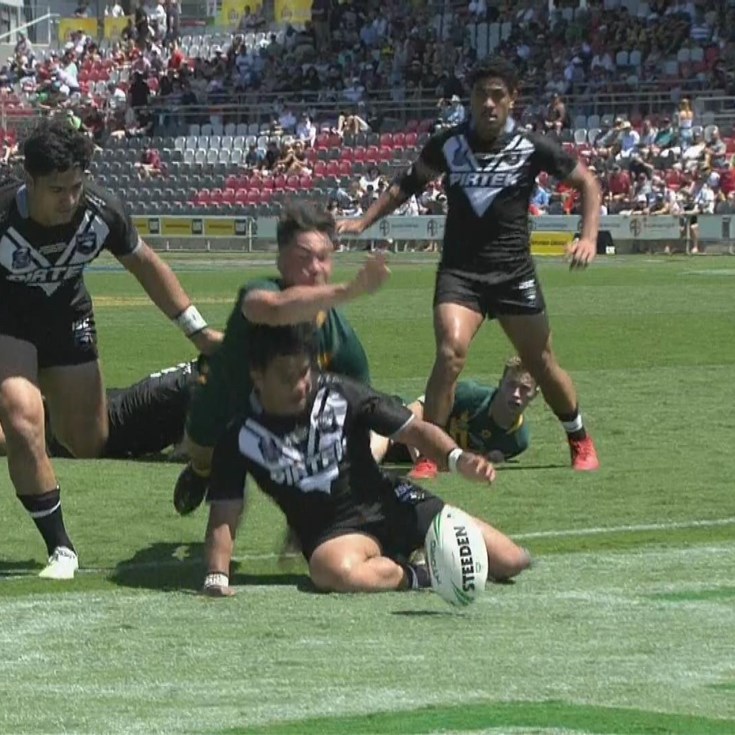 Walker directs play down the blindside for Tabuai